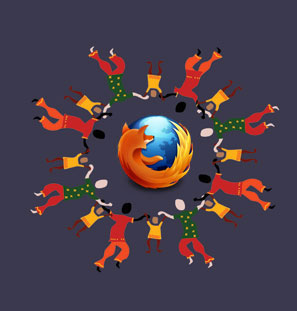 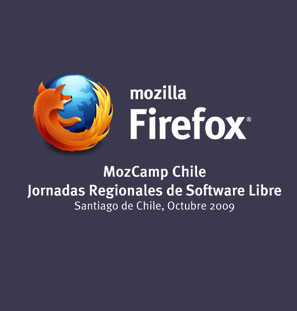 This is the wiki page for a two-part Mozilla sponsored conference for the Mozilla Hispanic Community:

Mozilla is organizing a two-part conference for the Mozilla Hispanic Community:

Both events will take place at la sede Santiago Sur de INACAP (Universidad Tecnológica de Chile) in the city of Santiago, Chile. Information in this document can be displayed in either english or spanish (preferably, both). Feel free to use the language you're most familiar with.

Our goal is to bring together the Mozilla Hispanic community for two days to discuss how to improve and continue developing the community as marketshare and mindshare continues to grow.

MozCamp Chile will be a two day conference focusing on community development, l10n, marketing and add-ons. Please take a look at the schedule for additional details.

Talks will be around the following subjects and will be either 15 or 30 minutes.
. Please note that due to time some talks may need to be shortened to fit everyone in.

For anyone that is interested we will be streaming the event:  http://www.ustream.tv/channel/mozchile09

One of the newer open source and free software conferences in the Spanish speaking community, expecting 1500-3000 attendees in 2009. The conference is run by Chilean open source community organizations, one of which being Firefox Chile.  We will be there to improve visibility of Mozilla Hispano in the Open Source Community and try to recruit conference attendees to the project.


The event this year will be divided into three topics:

Registration is free.  Your name is already in the system and you can pick up your badge on Wednesday, October 7th when JRSL starts.

Three day conference with 2 Mozilla keynotes (by chofmann and seth), 4 Mozilla talks.  The tracks are:

To see the different activities of this congress please visit the JRSL Programa:

This year the JRSL will be realized in Santiago de Chile, at Santiago Sur campus of INACAP, Vicuña Mackenna 3684 (Metro Line 5, Camino Agrícola station). More information here (including a Google Map). Once you reach the campus there will be signs for where JRSL will be taking place.

We need people to volunteer their time to work at the booth.  Please sign up!

There will be a number of sessions by Mozilla employees at JRSL.  Talks will be 45 minutes long plus a 15 minutes question and answer session.  Please come and show your support!

Let's continue the momentum of each day into the night with a chance to get together and socialize, build friendships and understand our new knowledge.  Dinners will be paid for by Mozilla.  Let's meet at 20:15 each night in the Hotel Diego de Velazquez hotel lobby so we can walk over as a group.  All reservations will be under the name, Mozilla.

For everyone that is in town let's have dinner at Olivas Restaurant in the Hotel Diego de Velazquez at 8:30PM. If you can attend please write your name here: (25 spaces available)

This will take place on Friday October 9th in the Club Ambar. We'll share the happiness of a amazing week from the 22.00 hrs to 5.00 of the Saturday 10th. Make sure to reserve your energies to enjoy a huge party.

This club is very close from the hotel (5 minutes walking), so relax and enjoy the party!

Party is invite only and due to space and financial constraints reserved for MozCamp and JRSL staff.  Your name will be on a list before entrance to Club Ambar.

You can consult the participant's list.  Everyone (community members and employees) are encouraged to fill in their description.

All travel and accommodation costs for participants who have received a personal email invitation by Mozilla will be covered.  All invited participants will be staying in the Hotel Diego de Velazquez. An email containing detailed information on their hotel will been sent to each invited participant after registration.

Rooms have been pre-paid by Mozilla. Please note that you'll be asked to provide a credit card for incidentals upon checking in.

If you are being provided a hotel room by Mozilla, you have been assigned a roommate in either a triple or single.  If you have any questions please contact Sarah Doherty.

Participants flying to Santiago are asked to contact Sarah Doherty as specified in the email they receive after confirming their registration.

You can take a shuttle service to go to the Hotel from the Airport (see Google Map of the route). We recommend you take one of this services:

Invited participants who are traveling by train or bus are asked to purchase their own tickets. Mozilla will fully reimburse them the week following the Mozilla Camp.

Participants can take the Subway of the City (Metro de Santiago); the station where the university campus is located is "Camino Agricola" in the line 5. For more details you can see the map next:

All sponsored participants are eligble for a reimbursement via wire transfer.

Please note that any costs (hotel, food, bus, etc) associated with an extended stay will be at the attendee's own expense.

Santiago has a mild Mediterranean climate: relatively hot dry summers (November to March) with temperatures reaching up to 35 degrees Celsius (95 degrees Fahrenheit) on the hottest days; winters (June to August) are more humid with cold mornings, typical maximum daily temperatures of 15 degrees Celsius (59 degrees Fahrenheit), and minimums of a few degrees above freezing. Occasional snowfall occurs in the city, and may extend throughout the city, though this happens infrequently (about every 8–10 years). Mean rainfall is 360 mm per year and is heavily concentrated in the cooler months.

Check out a 10-day weather forecast for Santiago, Chile on weather.com.

Santiago is a very interesting city to visit a look for new experiencies.

Do you want to discover every corner of the city? Do you want live amazing experiences in this jungle of concrete? Visit our suggestions to plan your time here in Santiago.