WebMadeMovies is Mozilla's open video lab and film studio. We're gathering the world's most innovative filmmakers, hackers and artists to make films, web sites and software tools that tap the full potential of open video online. Our aim: create compelling media and useful new technology that will at once delight, surprise and engage audiences and help filmmakers and web tell richer stories online for many years to come.

Video today is *on* the web, but not *of* the web. Despite the innovation that's swept other online media, most video -- from information and entertainment to educational videos and user generated content -- is still trapped inside closed platforms that are difficult or impossible to search, link, quote or contextualize. We can "embed" video in pages, but only through closed-off players that are sealed off from the content around them. And that still behave much like traditional TV.


Creators that want to tell stories in new ways are forced to use multimedia systems like flash that cannot inter-operate with the rest of the web. To make matters worse, other filmmakers cannot learn from or build on these sites because the source code is hidden - the "view source" functionality of the web is broken.

All this traps video inside a virtual "black box," robbing it of audience and potential. And locking an entire branch of knowledge and creativity in closed systems that don't behave or innovate like the rest of the web.


[note: this is pretty technical, doesn't talk much about the lack of techniques amongst filmmakers to tell stories interactively -- which of course is rooted in the bad flash tools etc. also, nothing in here about the fact that film makers and web developers aren't working together, we don't have a shared professional language or working relationship, which is a necessary precursor to creativity and innovation. -ms]

New open video tools and standards like HTML5 allow us to throw open this closed black box. This creates an opportunity to weave video right into the fabric of the social web. As influential industry players move away from closed platforms like Flash, and as the devices people use to watch and produce video continue to rapidly evolve, the stars are aligning to build a more open video future. This represents a unique opportunity to take video in a whole new direction. What's needed now are the skills and artistic vision to innovate and give the world a taste of what's possible.


We're inviting storytellers to work with us to innovate not only technology, but how storytelling and narrative can evolve when woven into the web. We want to showcase what the open web can deliver as a platform that closed systems can't.

We've already gotten to work, kickstarting the process with a series of demos that put these ideas into action. We've made short videos that profile compelling uses of the open internet, and then created custom interfaces that enhance the story by pulling in content from across the web.

We've also sparked development on a set of technologies that open video needs right now, including popcorn.js - a Javascript library that lets video interact with the rest of the web, mashing up google maps, image feeds, twitter accounts and other semantic data.

[reference implementation concept is missing here] [also, picture of where the future is going missing -- even short term future. you've said what we've done. what are we going to do next?]

"Blow up your video." Imagine video that behaves like the rest of the web.

Open video tools like HTML5 can make all this -- and applications we can't yet imagine -- possible. Cutting-edge hackers, artists and filmmakers will make it a reality. 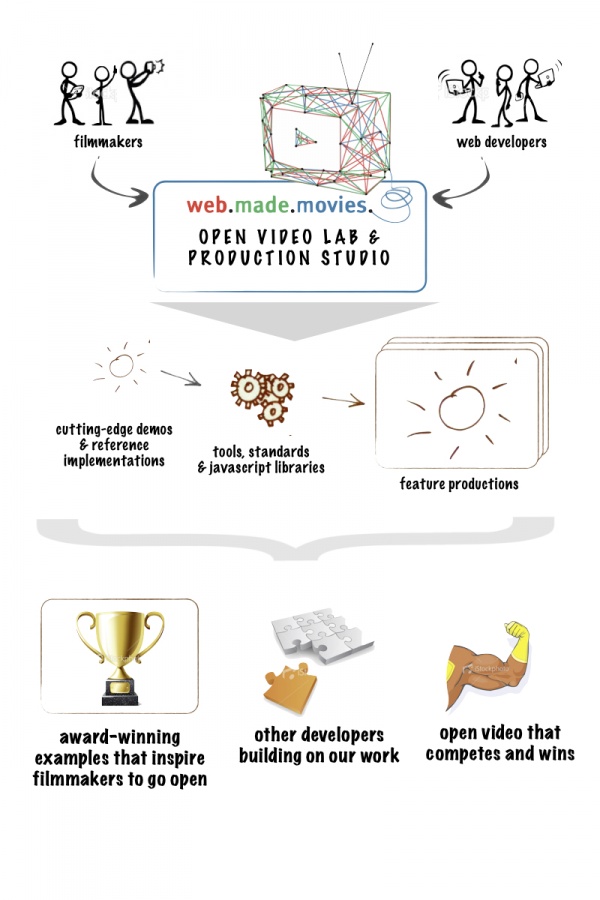