The Firefox OS MOOC course is one of the first projects in the Hungarian Mozilla/Firefox OS community to try and get Open Web education (via Firefox OS) into Hungarian universities.

The project was founded by Krisztián Karóczkai in 2013 who started the first Firefox OS MOOC course at Óbuda University, in Budapest, Hungary.
The initiative consists of a free, Hungarian-language online course, available for anyone with a computer and internet access. The course aims to teach open web technologies to students in a less bland, more engaging way, through the development of Firefox OS applications. Some partner universities & colleges then recognize the course by awarding university credit points for students (who have successfuly completed the course) that count toward accomplishing their respective studies.

MOOC is the initialism „Massive Open Online Courses”, and describes online courses available for anyone on the internet for free, for a wide audience to provide accessible, open information and opportunity for learning. There are several MOOC providers already, operating worldwide (like edX, Coursera or Udacity).

The Firefox OS course is part of the regional K-MOOC platform, a Hungarian-language MOOC platform operated by Óbuda University. The K-MOOC platform is expected to serve any and all higher education institutions (colleges & universities alike) in the Carpathian Basin where the language of teaching is Hungarian with online courses in diverse topics from jazz through ergonomics & pedagogy to computer sciences and programming. K-MOOC courses are available to students of 16 Hungarian higher education institutions and in 13 additional institutions in 5 countries in Central & Eastern-Europe (as of July 2015).

The Firefox OS course has been growing in reach since its start and is expected to launch in at least 6 Hungarian institutions for the 2015/2016 fall semester, with discussions with additional institutes still ongoing.

The Firefox OS MOOC course (titled „Mobil alkalmazás fejlesztés FirefoxOS platformon” — mobile application development on the Firefox OS platform) was first announced by Krisztián Karóczkai and Kálmán Szalai at Webkonferencia 2013, and launched the next semester, in the February of 2014 at Óbuda University.

For the first course Telenor Norway/Telenor Digital provided some phones (Geeksphone KEON-s and some PEAK-s), and the course started with about 20 participants. The first course didn't have hard output requirements (like the need for upload an app to the marketplace, as later installments had), and participant track record was judged by a per-case basis.

In the fall semester of 2014, the course returned with 20-25 participants in the same format, with an updated course material.

For the spring semester next year in 2015 the course structure was revamped and an output requirement was introduced: everyone had to upload an app to the Firefox Marketplace by the end of the semester (though, successful reviewer clearance was not required to successful completion of the course).
The course structure was amended - in addition to the 16 students participating in a fully e-learning-based course, a second group started where studends had weekly laboratory classes too (after the recorded/streamed e-learning class) where they could get joint, hands-on experience with the curriculum and try their creations on Firefox OS devices immediately.

The format didn't work very well, the long days were counterproductive, and only 4 students have successfully completed the course.

The semester also included 3 consulting sessions where Krisztián presented the latest lecture in-person and students were able to consult with him during the laboratory session afterwards.
This format, as it turns out actually worked very well and presents the base for the next semester starting in the fall of 2015, with the recorded lectures replaced with actual real-time streamed ones. 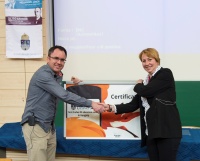 On April 18th at the OpenIT 2015 conference in Budapest, Brian King (representing Mozilla as European Community Manager) and Dr. Rita Ősz (representing University of Óbuda as Vice-Rector of International and Public Relations) signed a long-term partnership between Mozilla & University of Óbuda on continued collaboration in Open Web education efforts. The university was also presented a signboard recognizing its previous teaching efforts in Firefox OS application development and Open Web technologies.

„Brian King, European Community Manager of Mozilla presented a certificate to Dr. Rita Ősz, Vice-Rector of International and Public Relations at Óbuda University, which recognizes the institute as the world's first Firefox OS education center. The certificate was presented at OPEN IT 2015, a conference organized for the first time by the institute, dedicated to open-source software and open, public content.” — A Mozilla és az Óbudai Egyetem együttműködésének elismerése

Brian King in his presentation titled „The Mozilla Community – A global movement making local impact” talked about Mozilla's values, the importance of community (either on a local or global scale) and continued collaboration between associations across all aspects of society (corporations, foundations, government and academia).

Dunaújváros joins in 2015/Fall, see below for the semester-opening ceremony Szeged/Kecskemét probably return for 2015/Fall

The 2015/2016 iteration of the Firefox OS course will be the 4th semester since the project's starting date in early 2014.

In the current semester we face several challenges as we start to transition the project from its previous, experimental phase into a more structured and more organized pilot semester. With the experience gathered in the previous runs and due to the growing number of participating institutions, we have to scale the project and put it to a sustainable trajectory. We also need to start developing more versatile, localizable course materials that could then be picked up by non-hungarian-speaking communities and address challenges of the changing Firefox OS architecture and ecosystem.

Read more on the course structure and challenges below:

New institutions expected to implement the course this fall:

Note that above list might change according to how preparations progress at the partner institutions.
We are continously working on onboarding more institutions to the program, by using inter-institution relations and advocating the project at education conferences.

Classes at every participating institution will join a central, live-streamed e-learning lecture each week for 14 or 15 weeks. The lecture will then be recorded, and made available for later viewing for students not available at the time of broadcasting. The lecture will be presented at a different participating institution each week — institutes could opt-in to host lectures if they possess the sufficient infrastructure required to broadcasting the lecture to other participants.

Institutions could opt-in for a laboratory class, following the lecture, in which students can get hands-on experience in the topic previously discussed in the lecture. All institutions are provided with some Firefox OS devices (whether or not they opt-in for the lab class), that they could use to provide testing devices for the Firefox OS course's attendees. Laboratory course attendees could get help from instructors joining remotely (via TeamViewer) or locally (from volunteer lecturers who already graduated the course on previous semesters).

Before the end of the semester, students are expected to provide an application created for Firefox OS as their output requirement, and will be graded according to the sophistication and number of features used in said app. Users need to submit completed applications to the Marketplace, and after successful review, a raffle will be held to give out some Firefox OS devices to those who completed marketplace review - this is to motivate completed apps showing up in the Marketplace, even after the semester grading has taken place.

At the end of each semester, the author of the best Firefox OS application and his home institution is decided and rewarded with a Firefox OS device and a unique Education Award.
For more details, read on at the Firefox OS Education Award section.