The Campaign-Manager service exists to enable targeted messaging towards end users of Firefox for Android, based on platform, version, and time since last use. The initial use cases centre around recapturing users who have stopped using Firefox on Android by communicating about product improvements and new features.

As a concept, there are four logical components to delivering this service: 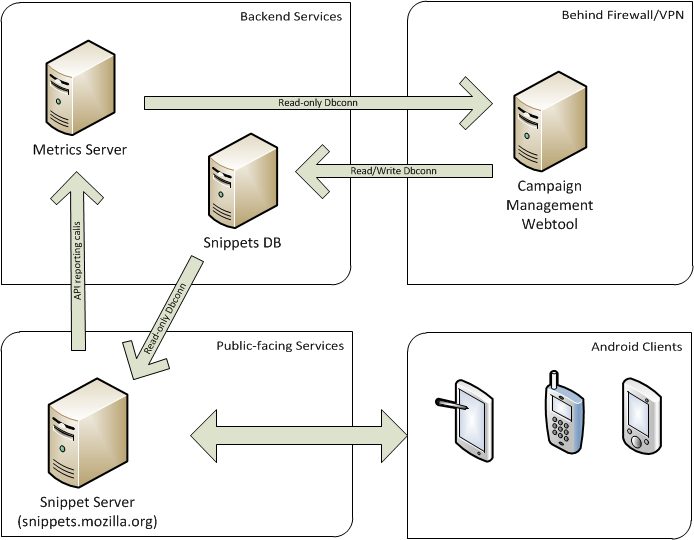 The Campaign-Manager service handles two tasks: responding to campaign requests, and redirecting clients to the end URL, and tracks the results of both actions.

Note, this product was originally called "snippets", and was renamed to avoid confusion. There are some residual uses of the term "snippet".

On a successful request, when there is an available campaign, this will return a JSON array of objects containing all needed information required to display a user notification.

The 1 in the path is a version identifier for this protocol. The current version, as described in this document, is 1.

product is a broad identifier for the product being targeted. The current allowed value is simply android, but one can imagine desktop, firefoxos, or metro as additions.

channel is one of firefox, beta, aurora, nightly, or dev.

platform is a platform identifier corresponding to the build variable ANDROID_CPU_ARCH. Currently this is one of armeabi-v7a, armeabi, mips, x86.

If the client is aware of the number of days since the browser was last launched, an idle query parameter can be appended to the URL. If the browser hasn't been launched, or the duration is unknown, this parameter should be omitted.

If-Modified-Since Standard HTTP header, passes the time of the last successful request by the client.

200 OK Returns JSON in the body with the information required for the service to display a notification. Content-Location header to a fixed path to the campaign.

204 No Content Request was successful, no available campaigns, no data to return.

304 Not Modified No changes since the previous request. Only returned if If-Modified-Since is present in the request. The service will only return campaigns newer than the given time.

400 Bad Request The request itself or the data supplied along with the request is invalid. The response contains a Cornice error payload indicating the reason for why the request was rejected.

405 Method Not Allowed The request URL does not support the specific request method. For this API it's "anything except GET".

503 Service Unavailable Indicates that the server is undergoing maintenance. Such a response will include a Retry-After header, and the client should not attempt another API call for the number of seconds specified in the header value. The response body may contain a JSON string describing the server’s status or error.

Returns a standard HTTP redirect to the appropriate campaign URL

If the campaign is over, or the provided information is not present, we will redirect to mozilla.org.

Note: we'll construct the Accept-Language header using the Firefox UI and/or system locales. As many locales in Firefox include "en-US, en" in this header, using the raw header Firefox would use is probably not ideal, as we don't want to provide notifications in a locale the user isn't actually capable of reading.

At this point the client will display an Android notification, which on click will open the URL in Firefox.

Which should respond with:

The following are a speculative list of machines required. Operations has NOT signed off or agreed to this list. Please refer to Operations for the definitive list of required hardware.

Due to the heavy index use, recommend a master/client so that master writes do not impact client reads.

All data logging is being done via Metlog and should require no additional hardware.

The project is expected to require:

Remote clients request Announcements that match a given set of criteria. The servers provide a set of announcements that the client places on pages for user action. When a user selects a link associated with the announcement, the user is directed to a tracking URL that records the user action and delivers the original destination URL.

No individual user information is recorded. Privacy has already been briefed.

I do not have full information for the following:

The target audience currently is "Android", with "B2G" expected shortly after. Devices would poll for updates at first launch, then again at an undetermined period beyond that (~24+ hr). A connect failure is non-critical, but the device will retry afterwards. Redirect links will record data associated with the campaign to metrics and return a 302 for the correct, associated link.

The number discussed currently is "20". I expect that, the number will probably be closer to "100". Data records are not expected to be over 1K each and should fit within memory

Review the Server side components of Campaign Manager

This feature provides the server components to remote clients for the Campaign Manager. It accepts general device profile information including:

and returns a set of candidate messages to display to the user. Messages include a title, brief call to action message and an action URL.

The URL passes through the redirector function which records that the url for the campaign has been selected. No other user specific information is recorded.

tl;dr: Campaigns attempt to re-engage users who may not be using the device as frequently as we'd prefer.

Since this is a mozilla specific concern and issue, with tight integration to the client, I don't believe that other solutions were considered.

The biggest thread is the authoring system. We rely on persona providing a fully verified email address, then check that the provided address originates with @mozilla.com or @mozilla.org. Rogue entries could be blocked by a 'whitelist', however entries are recorded with the author's email and could be easily identified.