This is a DRAFT.

Comments are welcome on dev-tech-js-engine(at)lists.mozilla.org; or, you can send them directly to me at jimb(at)mozilla.com.

(Even though it hasn't been implemented yet, this description uses the present tense, for clarity and ease of transition to summary documentation.)

Debugger user interfaces communicate with the application being debugged via a remote debugging protocol. The protocol is JSON-based, with clients and servers typically implemented in JavaScript. Each packet from the client is directed at a specific actor on the server, representing a thread, breakpoint, JavaScript object, or the like; each packet from the server comes from a specific actor.

Every server provides a root actor that can provide global information about the application ("I am a web browser"), and enumerate the potential debuggees present in the application—tabs, worker threads, chrome, and so on—each of which is represented by its own actor.

The server interacts with debuggees running in other threads simply by passing entire JSON packets between the client and actor code running on those threads. Thus, all inter-thread communication is handled via the protocol, permitting thread actors and the interfaces they use to be single-threaded and simplifying their implementation. Communication with subprocesses can be handled the same way.

The js::dbg2 interface provides functions to: 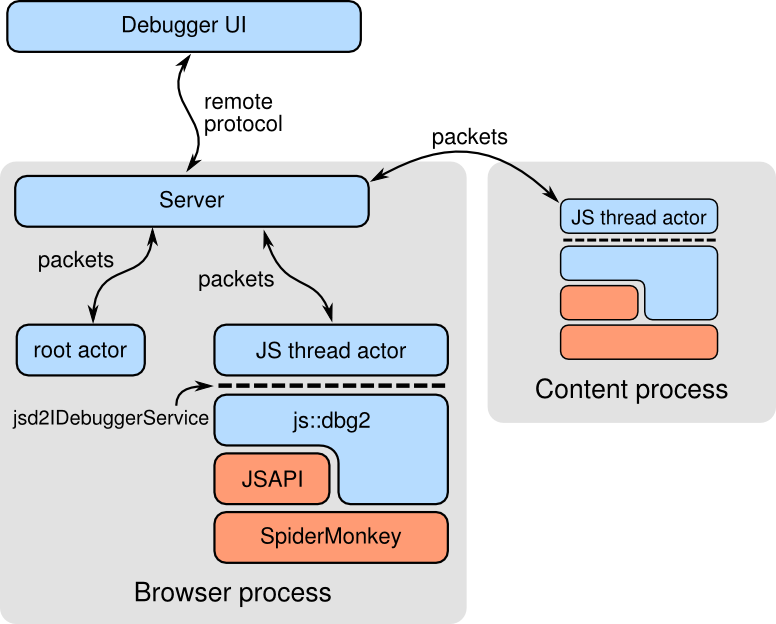 Remote debugging, in which the debugger's user interface can run in a separate process from the debuggee and communicates with the debuggee over a stream connection, addresses many of our goals at once:

The js::dbg2 interfaces, wrapped for JavaScript as the jsd2IDebuggerService, allow the debugger to select the code to debug, set breakpoints and watchpoints and otherwise express interest in debuggee behaviors, and inspect the debuggee's state.

The js::dbg2 interfaces operate at a higher level than jsd. Whereas jsd works in terms of the original SpiderMonkey bytecode interpreter—JSScript objects, bytecode offsets, JSStackFrame objects, and so on—the js::dbg2 interfaces operate at the JavaScript source code and value level, and avoid referring to specifics of the implementation. This makes it easier to support debugging of TraceMonkey- and JägerMonkey-compiled code: such code need not present its state in terms of an older intermediate representation that it doesn't use.

Like jsd, js::dbg2 provides grip objects that refer to values in the debuggee. The debugger can inspect the object's properties, their attributes, and so on via the grip without accidentally invoking getters or setters, making it easier to write secure and robust debuggers.

Also like jsd, js::dbg2 provides grip objects referring to JavaScript stack frames. However, there is no necessary correspondence between js::dbg2 stack frame grips and SpiderMonkey's internal JSStackFrame objects. SpiderMonkey's JITs are free to report the current function activations to js::dbg2 in whatever way is most convenient to them; they are not required to synthesize JSStackFrame objects, which must satisfy complex internal constraints.

Note that all estimates include time to write unit tests providing full code and branch coverage for new code.

JS_CopyScript JSAPI function (8 days)
Implement, document, and test a function that makes a fresh, deep copy of a JSScript object, suitable for execution in a thread or global object different than the original JSScript.

For various reasons, SpiderMonkey is moving towards restricting each JSScript to be used with a single global object (the next task; see details there). Before we can impose this requirement, we must make it possible for embedders to comply with it by providing a function which copies a JSScript object.

This is needed to allow us to enumerate all the scripts in use by a particular global object, along with several other current SpiderMonkey goals; see bug 563375#c4. We can accomplish this by having JS_ExecuteScript use copies of JSScripts owned by globals other than the one passed to it.

Change JSRuntime::scriptFilenameTable to use js::HashMap (3 days)
Since subsequent tasks will involve changing the data structures used to store script source URLs, we should grant ourselves the benefits of strict typing provided by the new js::HashMap template.
Create name-to-script mapping (8 days)
Adapt the existing hash table of script names to also function as a map from script names to scripts. This entails adding links to JSScript objects, arranging for entries in scriptFilenameTable to head chains of scripts, and having garbage collection properly remove scripts from their names' lists.
Script URL enumeration (5 days)
Define a function to enumerate the URLs of all scripts associated with a given global object.

Draft C++ js::dbg2 breakpoint API (3 days)
Write a C++ API declaring:
Implement Breakpoint Location Classes (5 days)
Implement the classes described above describing breakpoint locations. There may be some tricky work here, as we want to have entries in the scriptFilenameTable that are live because they are referred to by breakpoint location objects, not scripts, and have entries cleaned up as appropriate.
Implement js::dbg2::Breakpoint(15 days)
Implement the js::dbg2::Breakpoint class, including insertion and removal. This entails:
Use function start positions when re-setting breakpoints (8 days)
When re-loading a previously loaded script, we should use our knowledge of function boundaries to improve our accuracy as we re-set breakpoints in the new script. If all changes to a script lie outside a given function's definition, then treating the breakpoint as if it were set relative to the function's start, rather than at an absolute line and column, will allow us to find a better location for it in the new script.
Expand source notes to carry column information (8 days)
Extend the source notes attached to JSScripts to carry both line and column information. This allows debugging of poorly-formatted code such as that produced by script compressors or obfuscators. The bytecode compiler already tracks column numbers; they're simply not recorded in the source notes.

Note that this need not imply any increase in the size of notes for normally formatted source code: the granularity of the features distinguished by the source annotations (that is, statements) need not change. Only if there were multiple statements or functions on the same line would column numbers be needed to distinguish them.