Sometimes builds and tests need to be retriggered. For some classes of automation/infrastructure failures, this happens automatically and the job is marked in the Treeherder UI as dark blue. For other cases, or if you're doing investigative work e.g. testing for an intermittent failure, you'll need to retrigger the job manually. Retriggering a job will cause the certain test to be run again.

Tasks which belong to the release process to actually ship a build to users must not be retriggered or backfilled else the task chain will break. These tasks can be found e.g. on beta and release trees. Examples are the "UV" or "Snap" tasks. If a task name at the bottom left of treeherder starts with "release-", it's a release task. If you are unsure about it, ask in Firefox CI on Matrix. 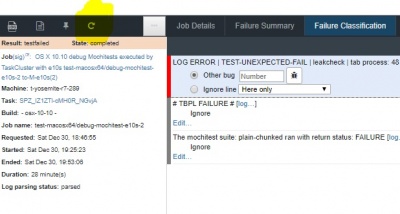 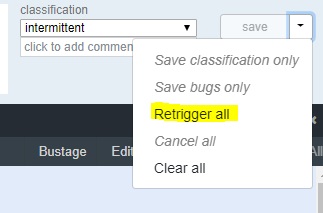 Backfilling runs the job on the previous pushes (at the moment: 5) where it often didn’t run (regarded as not necessary or to save resources). To backfill, you select a job and from the panel you click on the “...” next to the retrigger button, and choose the first option: 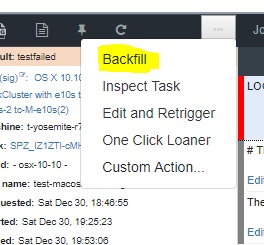 This comes in handy when you want to determine from which push a certain failure has started (ex: for backouts).
If you want to backfill on a certain number of pushes, click on “...” and then on Custom Action: 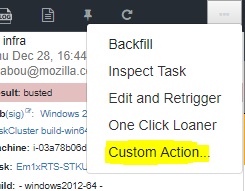 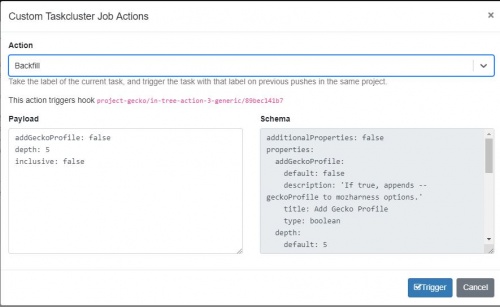 If new Nightlies have to be requested - be it for a backout or because the merge had to be later than expected - wait for the normal 'Gecko Decision Task' to finish and request the Nightlies after that. Due to the new 'shippable' builds, the Nightlies will create far less jobs and reuseh the already running shippable builds.

Nightly builds run at 12:00 / 01:00 AM/PM RO time so if we don't succeed in doing merges to central before that, nightly builds will need to be restarted on the last merge otherwise they will run again on the previous merge.

Note: We only respin nightlies if we miss them by a few minutes or if we need to get something into the next nightly( for example - fixes for crashes). If they have been running for more than half an hour, we won’t retrigger them. 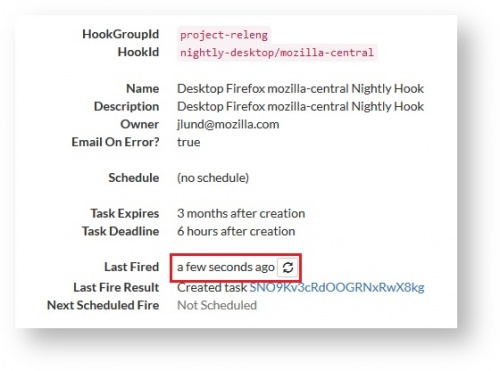 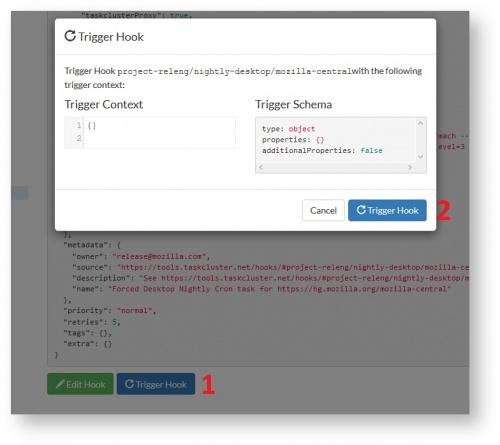 Do the same for both links and we've successfully started nightly builds, they will run on the last merge, please check the latest merge for this.

As of Jul 26, 2017 nightly builds for all platforms on m-c are now running in taskcluster so more instructions on how to respin them have been updated for these platforms See https://wiki.mozilla.org/ReleaseEngineering/Buildduty/Other_Duties#Nightlies

CAVEAT: there are implications to triggering too many Nightly builds in a single day or in quick succession. Please talk with a sheriff first before retriggering Nightly builds.

How to bulk retrigger build bustages a push at a time

Please note that this will run all failed jobs again, not only build bustages!

Step 3: Re-sign in with the taskcluster tool if you were already signed in

Note: Replace geckoDecisionTaskTaskId with the task id being shown on the bottom left when you click on the gecko decision task for the push with the failures.

How to install taskcluster CLI

This tool is needed in order to retrigger some build jobs, especially nightly builds. Download Taskcluster CLI on Ubuntu from https://github.com/taskcluster/taskcluster-cli

From your /home/user folder (or the location where mozilla-unified is stored), run the following commands:

The tool is now installed and made executable in /usr/local/sbin/.

How to use Taskcluster CLI