<< Back to Accessibility Home Page

With Firefox 3 and Gecko 1.9, Mozilla has now become one of the world leaders in accessibility. The infrastructure supports accessibility for both Windows and Linux, along with a number of technologies to develop accessible content and applications.

We now need to step back and ask the big questions. Where are we? What should the next priorities be?

The following diagram represents the current state of the accessibility architecture at the start of 2008 (as Firefox 3 gets ready to ship): Solid support for IAccessible2 and ATK (in content types HTML, XUL and ARIA). Improving support for Javascript toolkits, XUL apps and assistive technologies. Lacking support for SVG diagrams, MathML and Universal Access. 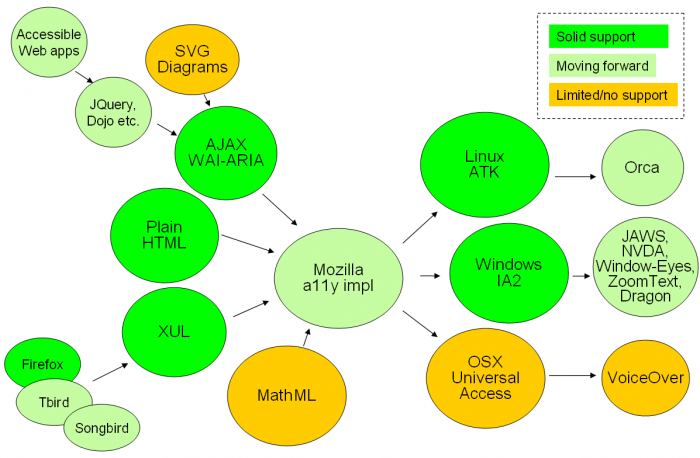 The diagram also shows that applications and toolkits use content types (HTML, XUL, ARIA, SVG, MathML) which utilize the core a11y support, which are exposed via the a11y APIs (IAccessible2, ATK, Universal Access), which are finally utilized by the assistive technologies on each platform.

Core accessibility: To Do items

Most of the remaining tasks are large ticket items, and are very challenging to achieve.

We should prepare proposal documentation for missed features of UA, end-user documentation to help client side developers to support Mozilla products and update existing pages to keep them useful for Mozilla accessibility developers.

((Surkov, we need to discuss this section, what did you mean?))

Any accessible XML language brings own rule set how to expose it for AT. Now in order to add accessibility support for new element (especially it makes sense for XUL which is very extensible) we need to create new C++ class. Since new widgets are usually is XBL binding then if we would have an extension of XBL to describe accessibility properties then it will simplify the work and allow authors of XUL based application to make their widgets accessible. Here for example I would be able to describe than any XForms element is labeled by child xf:label element. It can be used in conjunction with ARIA by the following way: this approach adds common rule set peculiar to certain XML vocabulary, ARIA adds concrete behavior for the certain element.