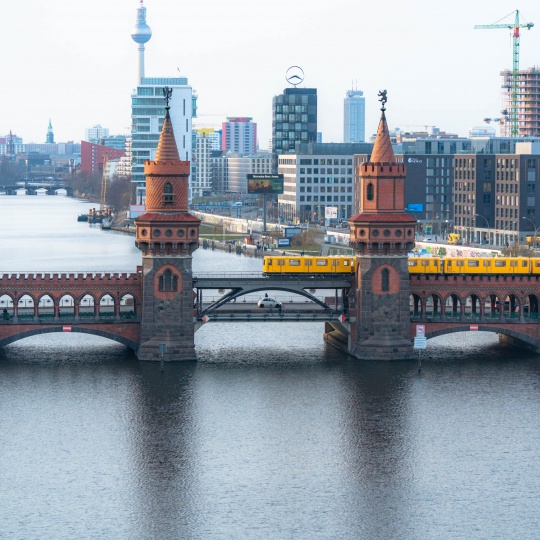 The Oberbaum Bridge as seen from the office

Welcome to the Berlin office! We're glad to have you here!

Come and join us for some German beer, some Currywurst, and our fun new space...

Need Help with a Mozilla product?

For fast and easy support go to Mozilla Support Please understand that Mozilla, as a non-profit, cannot provide phone support.

To access the building use the driveway to the courtyard of Schlesische Strasse 27 and go straight until the end of the area. Then enter Haus 3 entrance C on the lefthand side. You can use either stairs or the elevator to go to the 4th Floor.

The building entrance door opens automatically. However, the next door needs to be opened manually. Once you pass them, there are two elevators on the righthand side. Press the button and choose 4th floor (it is where our welcome/reception area is located). There is a grey door on the right when you exit the elevator on the 4th floor; they remain open. The glass door at the end of the short corridor can be opened with a badge. There are two floors in the office connected by an internal stairwell. If you want to use the kitchen or event space on the 3rd floor, please take the same elevator you used to get to the 4th / reception floor. There are 2 accessible toilets, one on each floor. -3rd floor- On the lefthand side as you enter the event & community space. -4th floor- On the lefthand side as you enter the reception area.

Berlin is also well connected by train. The closest major station for long distance and international trains is the Ostbahnhof. If the train does not stop at Ostbahnhof, then the Hauptbahnhof is the next best choice.

Indicating the next local train ("S-Bahn"), subway ("U-Bahn"), or bus station.
The subway ("U-Bahn") station closest to the office is Schlesisches Tor, served by subway line U1 (which actually drives above the earth in this section of the line). Another great choice is S-Bahn station Warschauer Straße, from which it is a 10 to 15-minute walk to the office, or Treptower Park, from which you can take a 10-minute walk or bus 165/265 to Taborstraße right in front of the office. You can find information on the metro service and maps here: http://www.bvg.de/en/Travel-information

The single best public transportation app for Android is Öffi. It covers all of Germany and is available for free through Google Play.

There's also the BVG Fahrinfo app, which is BVG's official transit app. This app gives really good transit directions as well as schedules. You can also buy tickets directly from the app.

If you know you need to take a lot of taxis while you are in town, we suggest downloading the MyTaxi app. You can filter taxis by who takes card, how many people you need to pick up etc.

http://michelbergerhotel.com/ 15min walk from the office. Free yoga class on Thursdays, make their own coconut water. Rooms range from "Cozy" (very tiny) to a larger scale. More hipster vibe. Very different from your usual hotel. It's an experience in itself but not for everyone. Drawback: some rooms are very small. It may get loud as it overlooks a shopping mall and a busy street.

https://hamptoninn3.hilton.com/en/hotels/berlin/hampton-by-hilton-berlin-city-east-side-gallery-BERMUHX/index.html Only 1.2 km from the office. The rooms are spacious, should have AC. Very good breakfast!

https://www.hotel-johann-berlin.de/ in Johanniterstrasse (U1 Prinzenstr). This is definitely outside of walking distance, but if you take the U1 towards Schlesisches Tor, you are close.

Things to do in Berlin

Burgermeister
Oberbaumstraße 8, 10997 Berlin
Delicious and fast burgers right at the U1 Schlesisches Tor.

Curry & Chili
Intersection of Osloer Str. and Prinzenallee, 13359 Berlin (Wedding)
For all you chiliheads out there: This is the place to get spicy hot currywurst in the city. If you don't know what you're doing (and especially if you think you do), start with a "number 3", maybe a "number 4" if you're daring. Unless you're a trained capsaicin pro, you're unlikely to make it past level 6 without bad things happening to you, so please be careful! The food trailer style restaurant is located in the middle of a huge, busy intersection right next to an S-Bahn stop. Seeing people from all walks of life rush by while your mouth is slightly burning is part of the charme of this weird culinary Berlin gem.

The Bird
Am Falkplatz 5, 10437 Berlin
US style burgers made from freshly ground beef. This restaurant is serving some of the best burgers of the city. The place can fit larger groups, but be sure to reserve a table even with small groups, because the place has a reputation and it gets crowded past 19h.

Zur Gerichtslaube [5]
Poststraße 28 · 10178 Berlin Mitte / Nikolaiviertel
If you would like to see traditional German restaurant and try creamy potato soup, 'Berliner style' grilled sausage or oven-fresh apple-strudel, this place is for you!

Excellent Indian Food! Can accommodate medium to large parties with a reservation.

Hopfenreich
Sorauer Str. 31, 10997 Berlin
If you’re looking for a bar with craft beers from Berlin, Germany and all over the world you should check this one out. It's quite close to the office.

Brewdog
Ackerstraße 29, 10115 Berlin
Craft beer bar in Mitte. Very central, so it can become quite crowded, so try to come early. Focus is on US and English beers.

Vagabund Brauerei
Antwerpener Str. 3, 13353 Berlin
Micro Brewery and bar in Wedding selling their own beer (and teaching you how to brew yourself, if you care). Slightly more exotic than the rest and somewhat far out, but you're essentially sitting next to the beer brewing pots you're drinking from. This is the place to be if you're into exotic IPA style brews.

Brauhaus Lemke
Dircksenstraße 143, 10178 Berlin
Very, very German and not nearly as bad as it sounds. They serve decent foods and very tasty beer from their own micro brewery. Pro-tipp: order a "Bierprobe", which is a small sample of all their beers. Located right next to S-Bahn stop Hackescher Markt and in walking distance from Alexanderplatz. The place has a nice, but slightly hidden outside area in the back.

Booze Bar
Boxhagener Str. 105, 10245 Berlin
Awesome, awesome cocktails in Friedrichshain, about a 25 minute walk from the office to the North. Be prepared to get a personal cocktail "fitting" to your taste. Bar has a decent foosball table, btw.

Schwarze Traube
Wrangelstraße 24, 10997 Berlin
Easily one of the best cocktail bars of Berlin, perhaps even the best. About a 15 minute walk from the office to the South-West. Cocktails are tailored to you taste, and please don't even think about ordering a Margarita, as these highly-skilled people have better things to do than making standard cocktails. It's really quite the taste experience. The place is tiny, so you need to reserve a table or go early. Don't expect to fit large groups, though. Six or eight is probably the max.

Forum Wine Bar
Fehrbelliner Straße 57, 10119 Berlin, Germany
The Forum wine bar is super cool. You pay 2EUR when you enter and you drink as much wine as you want and eat from their small salad bar. In the end, you pay what you feel it was worth. Done!

Eschschloraque
Rosenthaler Straße 39, 10178 Berlin
Where all the hackers hang out. Smoker's bar. Pro-tipp: order a "Tschunk" (Caipirinha with Club-Mate). It's close to S-Bahn stop Hackescher Markt in walking distance from Alexanderplatz, and easy to miss with the entrance hidden deep inside the backyard.

XHain
Grünberger Str. 14, 10243 Berlin
One of the youngest maker spaces of Berlin located near S-Bahn stop Warschauer Straße. It's just a 15-minute walk from the office. The space is very active and we hear that people there are unusually friendly and welcoming.

c-base
Rungestraße 20, 10179 Berlin
The largest hackerspace of the city located directly on the river Spree near Subway/S-Bahn station Jannowitzbrücke. It's not easy to find because it's located in the second backyard from the street. Open every day, it has regular and irregular events on most of the evenings and parties on the weekends. The included bar also sells the legendary "Tschunk".

Raumfahrtagentur
Gerichtstr. 15, 13347 Berlin
Need to quickly machine your metal parts, 3D-print a case for your electronics project, or sew your pants? Or reverse-engineer your DNA in a biolab, smell the vegetables or just hang out in the hot tub of a massively green backyard garden? The "Space Agency" is one of the most well-equipped fablabs you'll find in this country, and always worth a little visit.