Who is in the Mozilla community? How many contributors, supporters and users are there? What would the community look like if you made an infographic about it? Where do you fit in? This page answers those questions.

This infographic gives a high-level overview of the different ways people interact with Mozilla and the relative size of these groups. It provides an easy way to show how a small number of people have made a difference in hundreds of millions of people's lives. 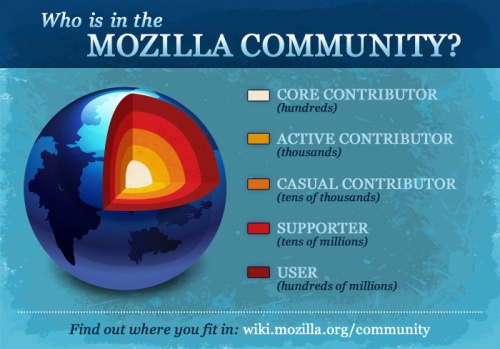 Note: if you are interested in localizing this graphic, feel free to edit the PSD file and send that to David Boswell.

Who Is In The Mozilla Community?

A Mozillian is someone who identifies with Mozilla’s principles and mission to make a web where people know more, do more and do better.

There are Mozillians involved at many different levels in the community. The following terms provide details about the different levels as people get involved through belief in Mozilla's mission, action to support the mission and interaction with other community members.

A core contributor is someone (staff member, volunteer, partner, etc.) who has a leadership or ownership position in one or more Mozilla project areas.

An active contributor is someone who has given substantial time, expertise and capabilities to a Mozilla activity that involves collaboration with others within the last 12 months.

A casual contributor is someone who has volunteered occasional amounts of time, expertise or talent in an activity or function that involves interaction with other community members.

A supporter is someone who believes in our products and mission and has taken action to support Mozilla, but has not interacted with other community members.

A user is someone who chooses to use Mozilla products but may not be aware of Mozilla's mission or that there are volunteer opportunities they could get involved with.

Alumni are people who have previously contributed to a Mozilla activity or function but are not currently active.

How Do You Fit In The Community?

One question we've heard about the infographic and these definitions is 'How do I fit in?'

Mozilla exists because people choose to get involved and to become part of the community, so the information here is a guide for people to use to self-identify.

Take a look and tell us where you belong. If you think the definitions or the infographic don't capture how you are involved, let us know and we'll update this. If you aren't sure, we'll be happy to talk with you about this.

The forums below are the best place to go with any questions, comments or suggestions.

Note: the mailing list, newsgroup and Google group are all linked so if you post to one it will get sent to the other ones as well. This allows people to use the discussion tools of their choice.