Webapps integration on mobile has (or can have) three principal components:

Along side of this, there is the issue of handling apps that are installed (i.e. web apps with manifests, etc.) from the web or a webapp store.

The high level goals for the feature is to expose web apps to users of Firefox for Android. Users should be able to access their apps, to discover new apps, and to have a seemless online apps experience across devices.

Case 1 - Enabling designation of an "app"

A user should be able to say "I would like to treat this site as an app", most likely from the Site button.

The concept here is for an Android-native Firefox widget to be installed with Firefox. It would placed on the Android desktop and could house the icons for installed/designated webapps (as well as potentially other Firefox capabilities like awesomebar suggestions). Related question: How much of awesomebar capability should be available through the widget? The design, in this case, is clear -- icons based on high-res-as-available versions of the site favicon, directly on the desktop.

Case 3 - Apps available in the browser

Even if installed/designated apps are made available on the desktop or in a desktop widget, there is still value to them being synced and being findable in the browser itself. The awesomescreen and tab area are two possibilities. We're exploring the former more vigorously.

These are old - do not implement! 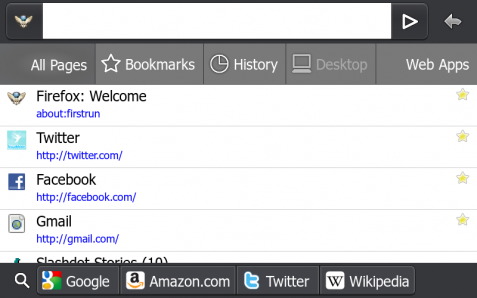