New architecture plan is going to construct a powerful configure to generate an appropriate Makefile for build back-end as know as build step to consume. Thus, GNU Make will be adopted as our firstly choose build back-end tool. We're going to reference the architecture of CMake, they also have adopted the concept of splitting configure step and build step early and it's a fully fledged tool already have good solution to build up a powerful configure such as detecting the changing of ENV variable and computing those complicated file dependency to decide whether to re-generate Makefile or not.

Learning from CMake could be a huge help for us mitigate circumstances while we're fighting in new architecture transition. A study of CMake is ongoing within our implementation phase, and moreover we are trying to dig into CMake from it's source https://github.com/Kitware/CMake and play with those popular CMake projects such as opencv or libwebsockets 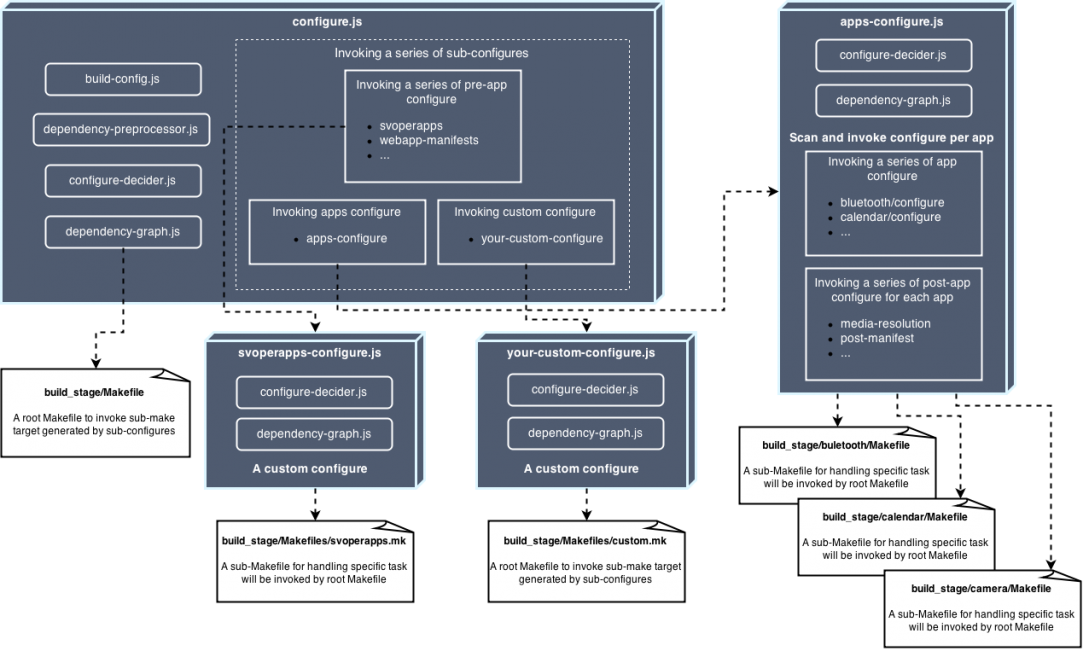 It means any changes of above things is likely to produce a different Makefile structure, so we should re-run configure to generate appropriate Makefile.

Initial landing step. Since our new build system plan is around splitting a build process into two steps including configuring and building. This stage will focus on building up a configuration modules - configure.js and using GNU make as our build back-end to produce final target. It means configure.js part will run on XPCShell and require existed build modules at this stage in order to keep build system working properly. Finally, the new build system is going to be landed in code-base and replace current build system.

After initial landing step being done, we should abandon GNU make's PHONY targets as many as possible, so we could have a faster build by taking the advantage of GNU make's incremental build. The configure.js should be able to connect with different build back-end. In order to achieve this aim, we eventually come out a new phase - config.status [2] for preparing the next step (replacing build back-end). The idea of config.status is charged with the task of tell back-end tool how to build the tree which includes scanning the build system definition and constructing a DAG data structure for representing task dependency and supporting parallel build natively. It means config.status will be generated by configure.js and output a build-file for back-end consumption (e.g. a `make` back-end will write a `Makefile`).

We're going to measure incremental build performance from GNU make back-end. If the result is as good as our expectation, the decision of choosing build back-end would be GNU make. Otherwise, the new milestone would be targeting on constructing the new build back-end tool. After surveying in milestone 3 of previous plan RefactoringToNode, we believe that the Gulp or streaming base build back-end could offer a better performance especially in clobber build. Therefore, in this step, a streaming base build system which will be implemented.

Why new build system is quicker than current one?