This proposal lets us use a generic remoting layer backend. Hardware/platform specific backends are isolated to the GPU process and do not need to do their own remoting.

The immediate need is to get something working for Fennec. Proposal:

Start with bare-bones test application including important use cases. No tile manager. Get remote layers working. Look into best approach for layers tile manager; maybe a new TiledContainer that does caching internally. Not clear whether browser or content process should own this.

Will the browser process need to see all layers in a content process, or just a single container/image/screen layer? We always want video in their own layers to decouple framerate from content- and browser-process main-thread work. So at minimum, we need to publish a tree consisting of a layer "below" the video, the video layer, and a layer "above" the video. Need plan for optimal performance (responsiveness and frame rate) for the following cases.

Question: for a given layer subtree, can reasonably guess how expensive the transformation/compositing operations will take in CPU and GPU time? Could use this information for distributed scheduling. Low priority.

Assume we have a master process M and a slave process S. M and S maintain their own local layer trees M_l and S_l. M_l may have a leaf RemoteContainer layer R into which updates from S are published. The contents of R are immutable wrt M, but M may freely modify R. R contains the "shadow layer tree" R_s published by S. R_s is semantically a copy of a (possibly) partially-composited S_l.

Updates to R_s are atomic wrt painting. When S wishes to publish updates to M, it sends an "Update(cset)" message to M containing all R_s changes to be applied. This message is processed in its own "task" ("event") in M. This task will (?? create a layer tree transaction and ??) apply cset. cset will include layer additions, removals, and attribute changes. Initially we probably want Update(cset) to be synchronous. (cjones believes it can be made asynchronous, but that would add unnecessary complexity for a first implementation.) (asynchronous layer updates seem counterproductive wrt perf and introduce too many concurrency problems. synchronous seems to be the way to go permanently.) Under the covers (opaque to M), in-place updates will be made to existing R_s layers.

Question: how should M publish updates of R_s to its own master MM? One approach is to apply Update(cset) to R_s, then synchronously publish Update(cset union M_cset) to its master MM. This is an optimization that allows us to maintain copy semantics without actually copying.

A cset C can be constructed by implementing a TransactionRecorder interface for layers (layer managers?). The recorder will observe all mutations performed on a tree and package them into an IPC message. (This interface could also be used for debugging, to dump layer modifications to stdout.)

Video decoding fits into this model: decoders will be a slave S that's a thread in a content process, and the decoders publish updates directly to a master M that's the compositor process. The content and browser main threads will publish special "placeholder" video layers that reference "real" layers in the compositor process.

The process architecture for the first implementation will look something like the following.

The big boxes are processes and the circles next to squiggly lines are threads. PFoo refers to an IPDL protocol, and PFoo(Parent|Child) refers to a particular actor.

Layer trees shared across processes may look something like 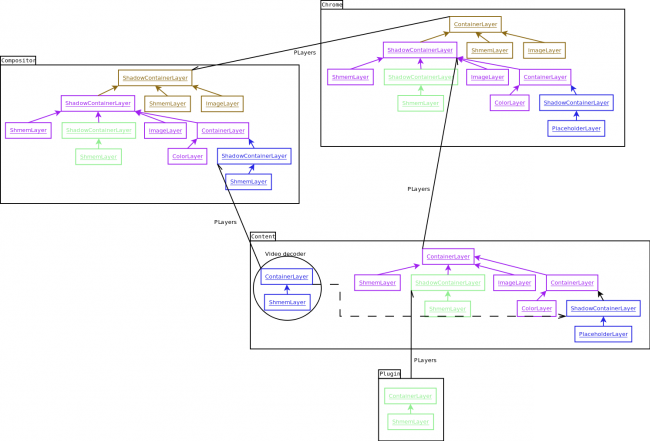 Like the first diagram, big boxes are processes. The circled item in the Content process is a decoder thread. The arrows drawn between processes indicate the direction that layer-tree updates will be pushed. All updates will be made through a PLayers protocol. This protocol will likely roughly correspond to a "remote layer subtree manager". A ShadowContainerLayer corresponds to the "other side" of a remote subtree manager; it's the entity that receives layer tree updates from a remote process. The dashed line between the decoder thread and the Content main thread just indicates their relationship; it's not clear what Layers-related information they'll need to exchange, if any.

NB: this diagram assumes that a remote layer tree will be published and updated in its entirety. However, it sometimes might be beneficial to partially composite a subtree before publishing it. This exposition ignores that possibility because it's the same problem wrt IPC.

It's worth calling out in this picture the two types of (non-trivial) shared leaf layers: ShmemLayer and PlaceholderLayer. A ShmemLayer will wrap IPDL Shmem, using whichever backend is best for a particular platform (might be POSIX, SysV, VRAM mapping, ...). Any process holding on to a ShmemLayer can read and write the buffer contents within the constraints imposed by Shmem single-owner semantics. This means, e.g., that if Plugin pushes a ShmemLayer update to Content, Content can twiddle with Plugin's new front buffer before pushing the update to Chrome, and similarly for Chrome before pushing Chrome-->Compositor. We probably won't need this feature.

The rough idea here is to capture all modifications made to a layer subtree during a RemoteLayerManager transaction, package them up into a "changeset" IPC message, send the message to the "other side", then have the other side replay that changeset on its shadow layer tree.

What comprises a changeset is eminently fungible. For example, some operations may only apply to certain types of layers; IPDL's type system can capture this, if desired.

Recording modifications made to layer trees during transactions

It's not clear yet what's the best way to implement this. One approach would be to add an optional TransactionObserver member to LayerManagers. The observer could be notified on each layer tree operation. For remoting layers, we would add a TransactionObserver implementation that bundled up modifications into an nsTArray<Edit> per above. A second approach would be for LayerManagers internally, optionally to record all tree modifications, then invoke an optional callback on transaction.End(). For remoting, this callback would transform the manager's internal changeset format into nsTArray<Edit>.

TODO: assume processes have been launched per diagram above. Walk through layer tree creation and Publish()ing. Walk through transaction and Update() propagation.

When X11 clients die, the X server appears to free their resources automatically (apparently when the Display* socket closes?). This is generally good but a problem for us because we'd like child processes to conceptually "own" their surfaces, with parents just keeping an "extra ref" that can keep the surface alive after the child's death. We also want a backstop that ensures all resources across all processes are cleaned up when Gecko dies, either normally or on a crash. For Shmem image surfaces, this is easy because "sharing" a surface to another process is merely a matter of dup()ing the shmem descriptor (whatever that means per platform), and the OS manages these descriptors automatically.

Wild idea: if the X server indeed frees client resources when the client's Display* socket closes, then we could have the child send the parent a dup() of the child's Display socket. The parent would close this dup on ToplevelActor::ActorDestroy() (like what happens automatically with Shmems), and the OS would close the dup automatically on crashes.