Note: A lot of things described in here is still a Work in Progress and is expected to change over time.

This efforts aims at building tools and framework for analyzing audio and video quality for the Firefox WebRTC implementation. WebRTC involves peer-to-peer rich multimedia communications across variety of end-user devices and network conditions. The framework must be able to provide necessary means to simulate/emulate these usage configurations in order to analyze the behavior of WebRTC implementation in the firefox.

Below picture captures various components involved in the flow of media captured from mic/camera till it gets transported. The reverse direction follows a similar path back till the RTP packets gets delivered as raw media for rendering. 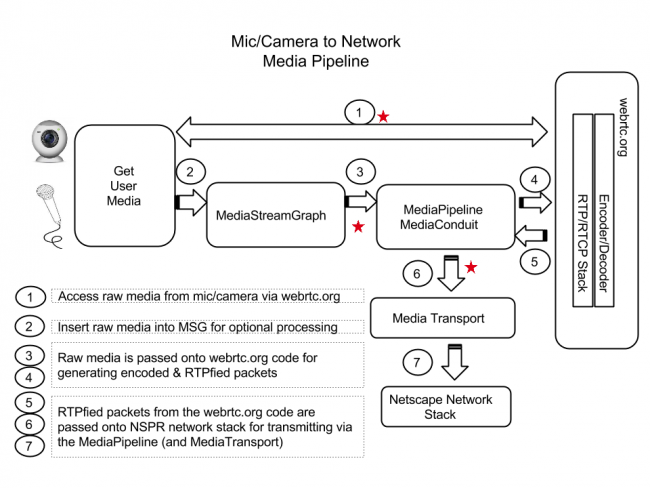 With several moving components in the pipeline, it becomes necessary to analyze the impact these might have on the overall quality of the media being transmitted or rendered. For instance, the parts of the pipeline highlighted ( marked star) has potential to induce latency and impact quality of the encoded media. Thus, having possibilities to measure, analyze and account these impacts can help improve the performance of the Firefox WebRTC implementation.

Not to forget, the pipeline in the diagram, doesn't capture impacts on induced due to the network bandwidth, latency and congestion scenarios.

bug 909524 is ongoing effort to provide minimal components that serves as a good starting point for carrying out Peer Connection audio quality analysis as part of Mozilla's Talos framework.

Below picture captures the test setup for reporting Perceptual Evaluation of Speech Quality (PESQ) scores for audio played through the Peer Connection. 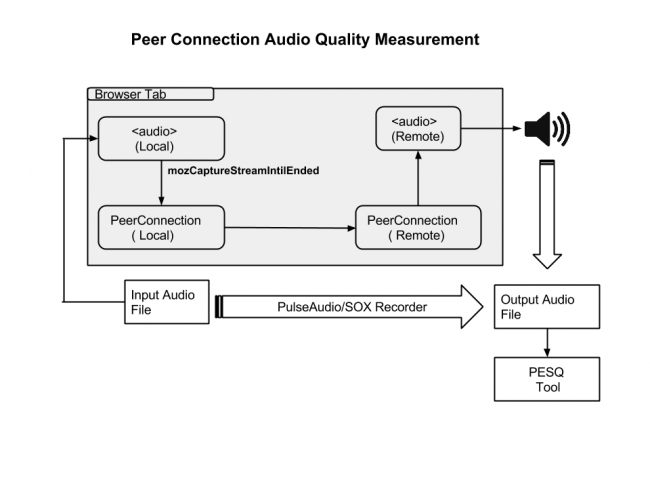 Following sub-sections explain in details the steps involved for this purpose:

Talos is Mozilla's python performance testing framework that is usable on Windows, Mac and Linux. Talos provides automated way to start/stop Firefox , perform tests and capture results to be reported to the Mozilla's graphing server across various Firefox builds.

Talos is used in our setup to run media tests along with other start-up and page-loader performance tests.

Feeding output of <audio> to the Peer Connection

Once we have the framework figured out to run automated media-tests, the next step is deciding on how do we insert input audio file into the WebRTC Peer Connection.

Finally, the generated MediaStream is added to the local Peer Connection element via the addStream() API as shown below.

From the previous 2 sub-sections we have the following

This sub-section explains various tools used to choose the right audio sink, record the audio played out and compute the PESQ scores


The recording is timed to match the length of the input audio file using SOX's trimming effects. This enables the recorder process to auto-complete on the SOX trim timeout expiry determined by the <record-duration>

Some near term items to implement/support include: 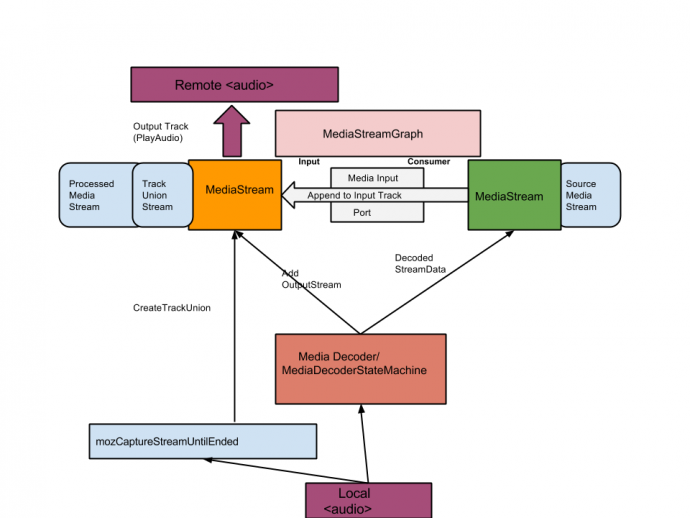