After checking out the necessary modules and tools this builder goes to work doing the following:

At the time of writing, manual work is required if we're shipping a release that has a mix of old versions that need/don't need a whatsnew page. If Release Management hasn't specified that a whatsnew page is needed, there's nothing to do. This must be done after initial update submission is done, and you'll need to know which where the cut off line for the whatsnew is. For example, when 35.0 shipped everything earlier than 34.0 required a whatsnew page, but 34.0 and 34.0.5 did not. If you don't grok how Balrog rules work it would be a good idea to read up on them before getting started here.

Note: do not modify blobs until both "updates" builders have finished. Your changes may be overwritten otherwise.

To create a blob with the whatsnew page enabled, do the following:

Because the changes that need to be made are highly dependent on the state of the rules at the time and the specific versions requiring/not requiring a whatsnew page, specific step-by-step instructions are explicitly not provided. You may need to manipulate existing rules, add new ones, or even delete some. As an example, here's what the release live and test channels rules looked like after 35.0 was shipped: 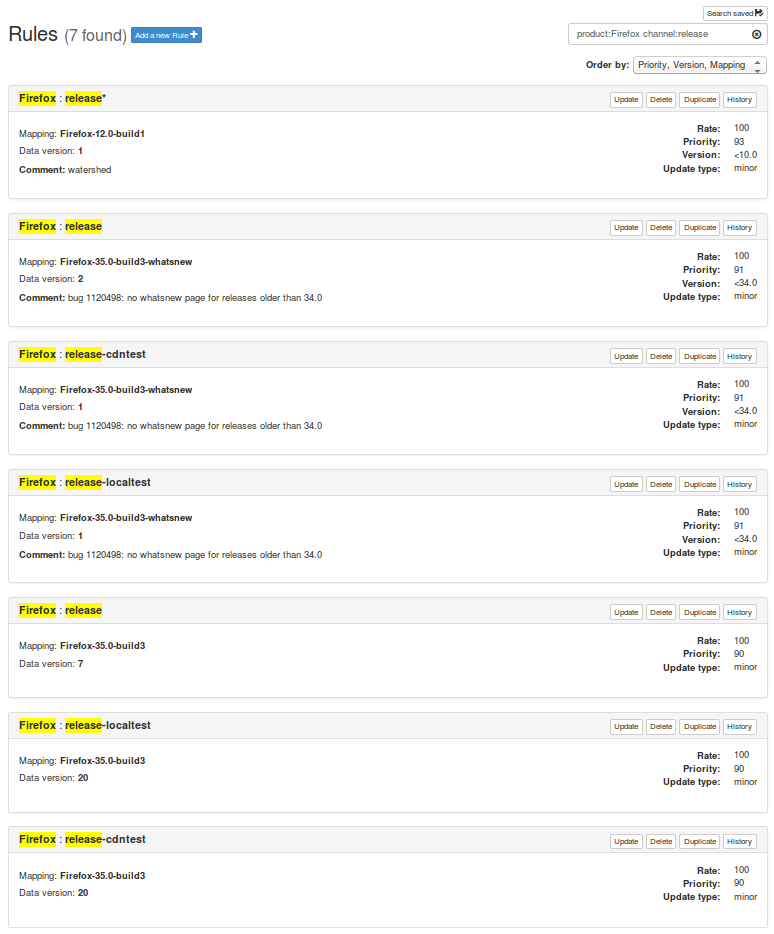 The rules above are listed from highest priority to lowest. The first is ignorable for our purposes (it's a long standing watershed update rule for users on versions earlier than 10.0). The next 3 are are rules that point to the whatsnew version of the blob created above - one rule each for the cdntest, localtest, and live channels. The last 3 point users at the non-whatsnew blob that was fully created by automation. Note that the whatsnew rules specify a version ("<34.0") and have a higher priority.

It does this in two different types of tests:

Update verify is split into multiple chunks per platform (10, by default). The full and quick checks are spaced evenly throughout the chunks giving each one roughly equivalent run time.

This step is pretty good at reporting errors. Most errors will turn the step red, and be pretty clearly visible in the log. Nonetheless it's a good idea to have a scan through the log for anything abnormal (searching for FAIL and WARN are helpful here).

This builder is triggered automatically after the updates builder.

No reconfig needed for this builder in manual mode. Automatic mode requires reconfig only on version bump.

This builder is triggered automatically after the updates builder.

If a long time has passed since the first run, this builder should be run a second time before pushing files to mirrors by hitting "Rebuild" button or forcing the builder with 2 properties set:

No reconfig needed for this builder in manual mode. Automatic mode requires reconfig only on version bump.

When enableAutomaticPushToMirrors is True, this is triggered automatically after the antivirus scan is done. When False, it must be manually triggered with Force Build. Step will automatically send email when complete.

The code used to be in scripts/release/stage-tasks.py (for historical revisions) but is now a mozharness script

Once mirror uptake has reached 50 or 60% this builder should be automatically started by the uptake monitoring process. If these don't get fired automatically, manually verify uptake on bouncer, then start the builder for each platform with 'Force Build' (no parameters needed) from the Buildbot waterfall. If the buildbot scheduler does decide to auto-start the builds after they've been manually started, fear not, as they are pretty quick builds and won't hurt anything.

This is a simple test which is run after mirrors are propagated to ensure there's no (major) problems with them. It does the same thing as the second part of Update Verify: for every locale/platform/version combination it checks for an update snippet, and then performs an HTTP HEAD request on the MAR the snippet points to.

The step will turn red if there are http codes other than 200 or 302, or if FAIL is found in the log. If it does this, you should have a look in the log, and find out which mirror is failing. It's a good idea to keep an eye on that mirror for awhile to make sure it finishes getting all of the files.

Searching the log for errors is made easier by downloading it and running the following locally:

This builder is triggered automatically after tagging completes, and creates and/or updates bouncer entries used on -cdntest and live update channels, and bouncer entries that Bedrock points at.

This step adds adds bouncer entries for installers, complete and partial updates for all platforms listed in enUSPlatforms and l10nPlatforms and locales specified in shipped-locales (en-US is being added in any case).

The step will turn red if tuxedo-add.py exits non zero. There are 2 major error sources:

These instructions cover _typical_ cases. If any special requirements have been requested (ie, whatsnew page) you may need to do different or additional things at the same time.


Before publishing, you should verify that the throttle rate is set as expected - automation will not update this for you. Compare the rate in the push e-mail (eg: 25% or 100%) to the rate on the Balrog admin interface. More on throttle rates can be found in the Throttling section of this page

We have a builder that updates the right parts of Balrog to push a release live. When instructed, you can use "force build" to start it.

NOTE: this step requires a "double authorization" - appropriate sign off by QE or RelMan, and verifying that automation is ready (e.g. 'ready to ship' notification).

Example buildbot URLs for the builder:

Note that the master you force this on, is not necessarily the master that takes the job, watch your e-mail for completion status. Subject will be "%(releaseName)s: Updates available on %(releaseChannel)s".

In order to guard against accidents, this builder aborts unless a special property is set. You must enter a "shipit" property on the form, whose value is also "shipit".

The throttle rate is number from 0 to 100, used in the sense of a percentage a gas pedal is pushed down. So

Do I need to throttle?

Generally, there's two different ways we do throttling for releases. Most of the time we ship a release partly throttled (10% served), throttle it completely 48 hours later (at the request of RelMan through release-drivers and/or a bug), once some amount of users have it in their hands. In certain cases (for example, when our release day coincides with a Microsoft patch Tuesday), we ship a release fully throttled (0% of requests are served an update).

In both cases you must make throttling changes before making the updates live.

Throttling is an attribute on each rule in Balrog. To change the throttle rate, simply adjust the "Rate" on the appropriate rule and save the changes: 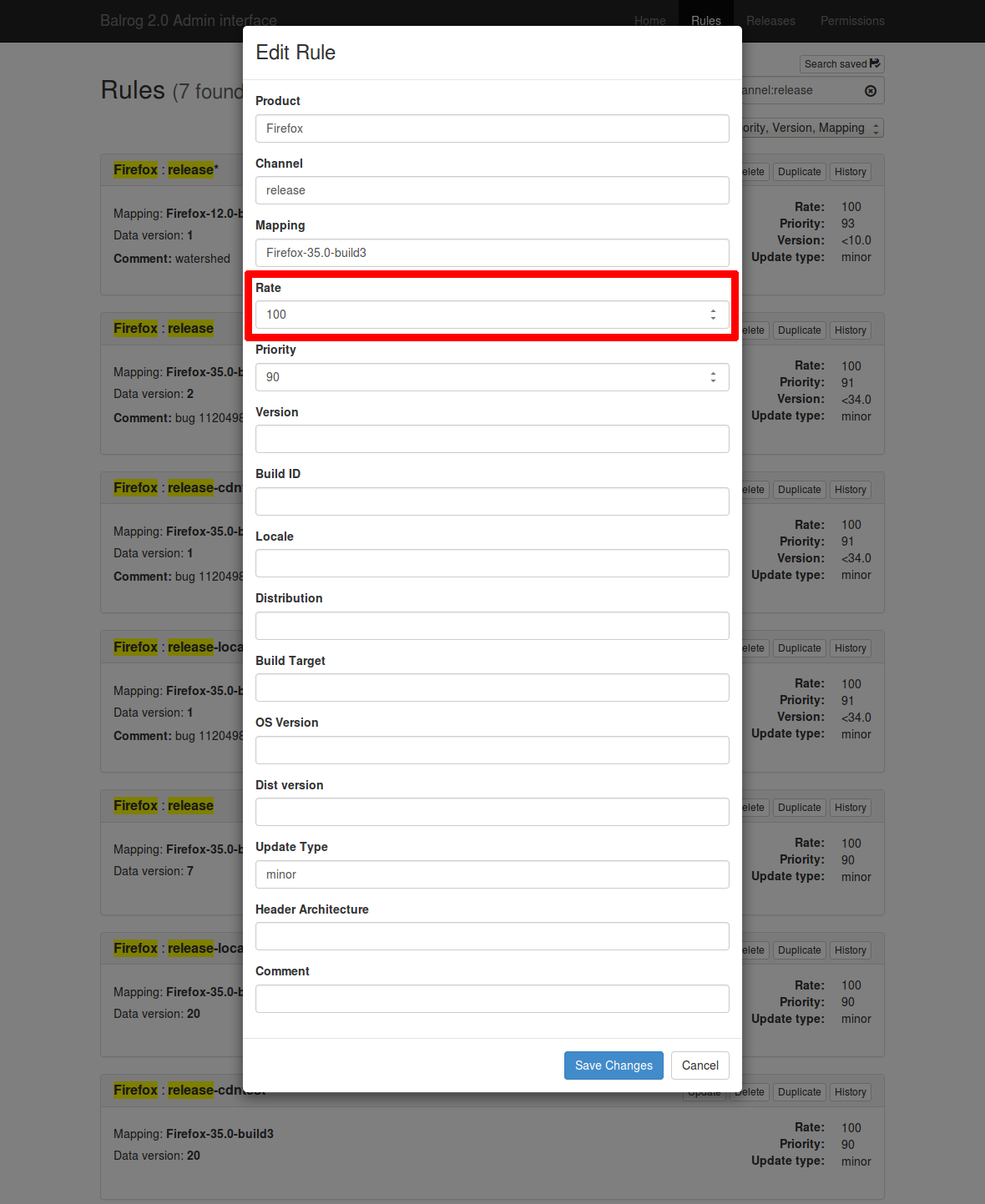 Some links to check:

Thunderbird is the only type of release that is non-release-promotion. After release is live, two more tasks need to be performed: marking them as shipped and run the BB post-release builder. They should be run at the same time, after release is live.

Mark as shipped on Ship It

Releases need to be marked as shipped on Ship It. To do so, visit https://ship-it.mozilla.org/releases.html, find the release in question, and click the "Shipped!" button.

The "post release" builder needs to be started with "force build". This builder will update bouncer aliases.

Example buildbot URLs for the builder:

Note that the master you force this on, is not necessarily the master that takes the job, watch your e-mail for completion status. Subject will be "%(releaseName)s: completed %(stage)s".