Firefox Accounts is an identity service landing in FxOS 2.0. It provides single-sign-on to local FxOS apps and services, authentication to third parties, and derivation of encryption keys. It is to replace PAKE in Firefox Sync after the ongoing transitional phase, and Find My Device will authenticate against FxA. Other apps and services will follow.

Since most of the FxA code for FxOS has been written from scratch over the past months, its upcoming 2.0 landing merits a full security review. The security of several apps and FxOS services will depend on the code covered in this review.

A previous review started in late 2013 was deferred as the code wasn't stable. A Firefox Accounts Security Design Review which doesn't cover the FxOS components was conducted in April 2014.

This review covers Firefox Accounts from a Firefox OS perspective only (mobile or desktop client code is not covered except for where it is shared with FxOS).

The following components were reviewed:

The following items were not reviewed:

FxA's security is heavily rooted in the OnePW protocol design, as well as the server-side database. Its server API is secured with the Hawk query authentication scheme. The OnePW protocol is documented in detail in the fxa-auth-server wiki.

Basic flow for signing in to Firefox Accounts is: 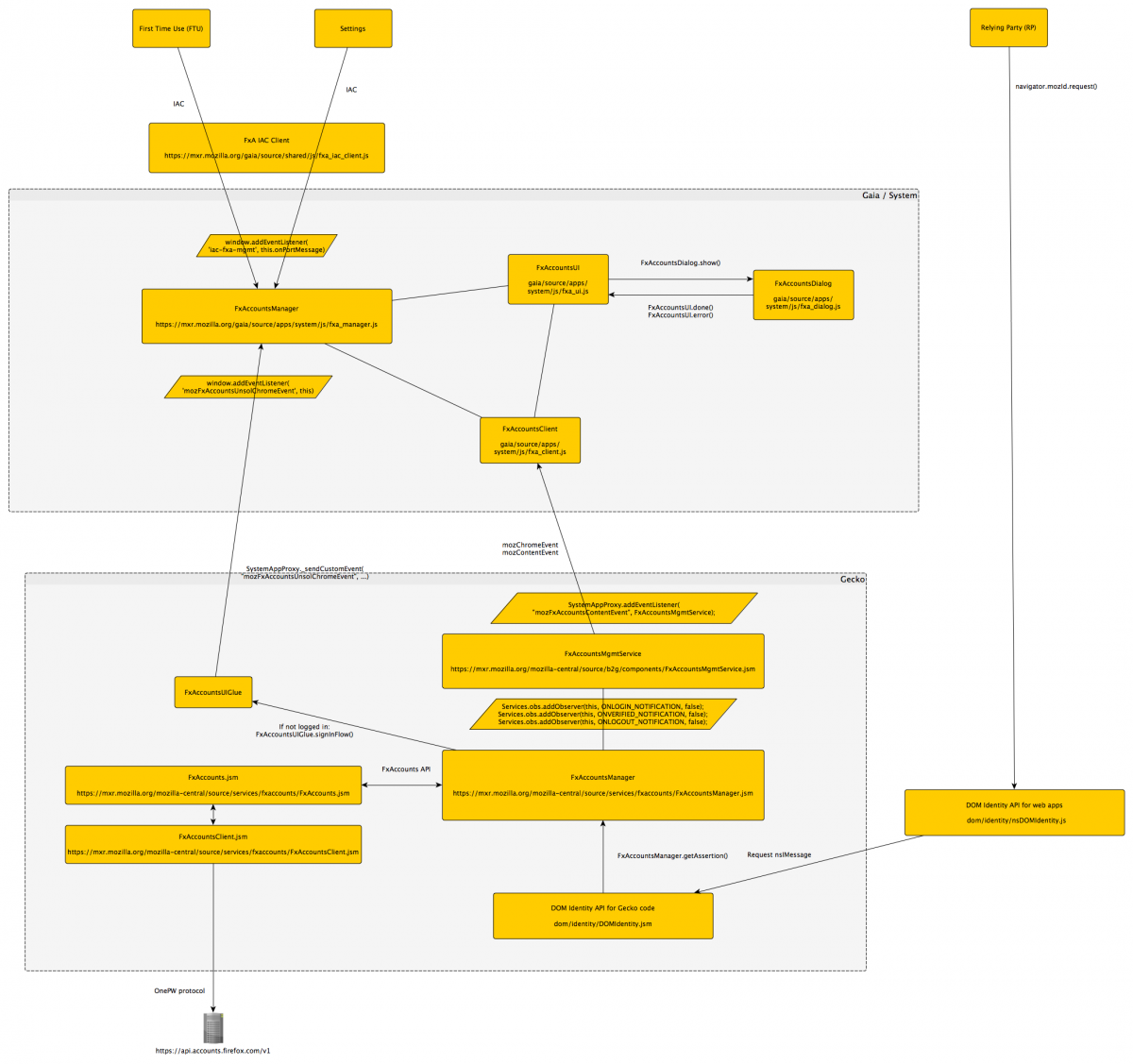 We identified three main data paths in and out of the FxA code:

The core of FxA on FxOS lives in the FxA Gecko service. It implements the client side of the OnePW protocol in FxAccountsClient.jsm.

The Gecko-side FxAccountsManager.jsm is the central piece of code that handles FxA status and triggers code paths that for example authenticate the user with the API server or display a FxA login screen should they become necessary.

Derivation of tokens, most importantly the authPW token which is derived of e-mail and password and used to proove knowledge of the Password to the FxA server, happens in Gecko. The authPW does not leave the Gecko portion of the code with the exception of being transferred to the FxA API server.

Some specific apps (currently just the certified FTU and Settings apps) need access to FxA functionality that allows them to manage the account (this is mostly sign up, sign in, re-sign in, logout and delete) and query information about the current config and state.

This service listens for IAC requests coming from these apps, triggers the appropriate Fx Accounts flows (sign up, login, re-authenticate...) and sends a reponse back to the UI.

public here means to other Gecko code, not to web apps. The password isn't exposed through this interface, but user ID and login state, and potentially derived keys are.

Defines a Credentials object that generates the authPW from e-mail address and password and implements the authPW parts of the OnePW protocol.

Defines important protocol constants, as well as the mozId observers:

All user-facing code lives in the Gaia world. This code does not implement FxA-specific functionality other than for the purpose of interacting with the user.

The FxA components in the System app are responsible to coordinate user interaction and to pass on information between IAC apps (FTU and Settings) and the Gecko core. Key component is the FxAccountsManager (beware of the name collision with the Gecko components) that manages state and hubs information.

First Time Use and Settings app

FTU provides screens to configure FxA from the First Time Use dialog. The settings app provides a top-level Menu entry to the same settings. FTU and Settings communicate directly with the Gaia-side FxAccountsManager though the FxAccountsIACClient. E-mail address, password and login-status are passed via IAC between the two sides.

While living in the Gaia world, Relying Parties do not directly talk to the FxA Gaia components provided by FirefoxOS. Instead they go through the navigator.mozId DOM API for listening to events.

So far there's only FindMyPhone (covered in a separate review) using FxA as a identity issuer. Other services will follow.

/!\ Are there long term plans to expose this to web or hosted apps?

"Relying Party" (RP) is mozId terminology for endpoints which are using mozId "Issuers" (so far Persona and FxA). Any privileged or certified FxOS app can use navigator.mozId.watch({ wantIssuer: 'firefox-accounts', ... }) to register callbacks for various events like onlogin, onready, onerror that are triggered by a call to navigator.mozId.request(). This triggers various code paths inside the central FxAccountsManager.jsm Gecko service which then returns the user ID as well as token or key material that can be sent to third parties to proof the user's authentication status and to encrypt data. The most critical potential issue is that any privileged app can read the e-mail address used for the FxA account. This poses a threat to user privacy and should be restricted.

FxAccountsClient.js in Gecko implements the OnePW protocol and handles secure communication with the FxAccounts API server run by Mozilla. After the inital signup/login phase which ends with a shared session token being provided by the server, subsequent API access by the client to critical functions is authenticated using the HAWK token scheme inside the HTTPS tunnel.

Besides harmless status information, data exchanged with the server is restricted to e-mail addresses, and tokens or key material encoded as hex byte blobs. The server side implemented in fx-auth-server validates e-mail addresses. Hex material is handled FxOS-side by functions CommonUtils.hexToBytes() and CommonUtils.bytesAsHex() which will fail by producing harmless invalid data when presented with malformed input. Similarly, the key derivation and hashing functions used to implement the OnePW protocol are not adversely affected by malformed input, resulting in authentication failures or invalid tokens in the worst case.

Various GUI elements are used for input and output of FxAccounts data, but we couldn't find unsafe use. User input of the user ID in settings/fxa/elements/fxa-email.html has type="email" and as such undergoes input filtering. We traced-back use of password data to only uncritical use in hash and key derivation functions.

In the System app there are two FxA-related uses of .innerHTML, in fxa/js/fxam_error_overlay.js and fxa/js/screens/fxam_enter_email.js. They contain HTML links, but are both uncritical as their input is built from constant strings only. Server responses containing errors are resolved using static string data as well before being written into the DOM.

The current version of the OnePW protocol heavily relies on SSL security when talking to the API server. Authentication uses the e-mail address and the authPW parameter constituting of an unsalted hash derived from e-mail address and password. Hence if SSL is breached by a man-in-the-middle, the leaked combination of e-mail-address and authPW can be used in a replay attack for impersonating the user. The current desolate state of SSL CA security merits a further hardening of the SSL connection to prevent MITM attacks, for example by state actors.

Current implementation allows any privileged FxOS app to use the navigator.mozID. In the code revision under review, the user ID is just leaked to all certified and privileged apps. This should be more restrictive, but we are able to spot potential violations in the app review process conducted by Marketpalce reviewers.

Special care needs to be taken should FxA become exposed to web apps and trusted apps in the future. The user must be enabled to detect and control access to their FxA credentials.

This is a complex topic beyond the scope of this document, and will be covered in a separate security review of the OnePW protocol. Currently only Sync makes use of the key derivation feature.

We could only identify e-mail addresses being displayed in HTML pages, but fx-auth-server validates e-mail addresses before storing them in its database https://github.com/mozilla/fxa-auth-server/issues/402, so persistent XSS is not a problem. However, since SSL security cannot be fully trusted at this point, we are recommending to add e-mail validation to relevant input incoming from the server as well as to input coming through the FxA IAC client.