This is a design review of the Web NFC API as currently designed, as of Sept 2, 2013. The API is not finalised but the Mozilla security team has been working with developers involved to provide security feedback to inform the finalization of this API, and guide future direction. While this review did cover some level of code review, final security code will be required once the implementation is stable, and there are apps planning to actually use this API.

The following system components were reviewed:

There was also some discussion on the following topics, however these were are not included in the formal review below:

The diagram below shows the current interactions between the major components of Web NFC. 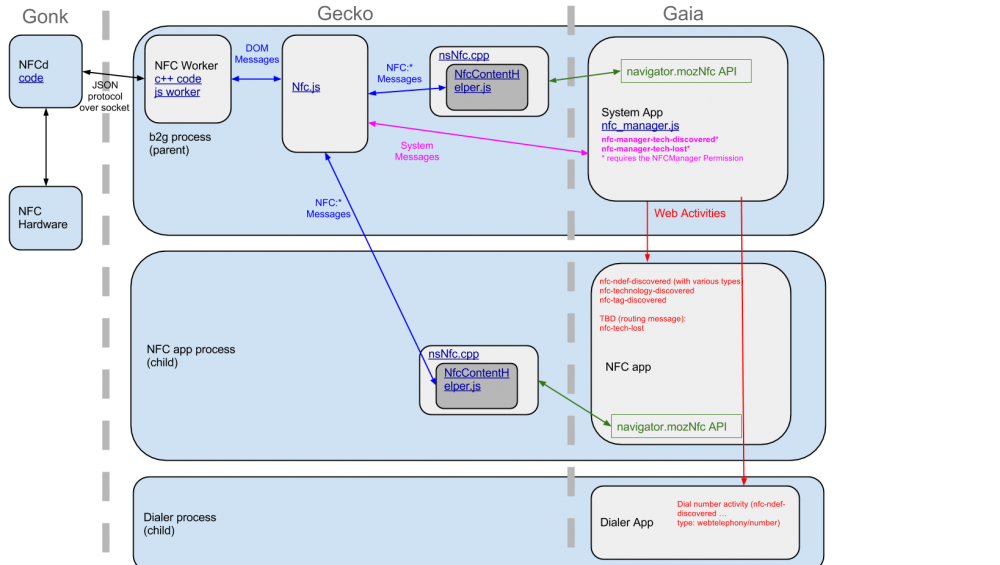 From order of lowest layer to highest, the main system components are described below.

NFC worker runs only in the parent b2g process, and connects to the '/dev/socket/nfcd' socket to send and receive messages from NFCd. Messages from NFCd are then posted to the the main thread (nfc.js) via DOM messages.

This component in the main process converts messages into NFC:* messages to be sent to the NfcContentHelper.js. When receiving messages it doesn't do any more than just check the type, and then create the appropriate message. In the reverse direction (when the web page is using the navigator.mozNfc API) some security checks are performed here to make sure the connecting child has the appropriate permission.

This is the API exposed to web content which allows for listening for NFC events, and writing and reading to/from NFC tags.

A critical part of the model with NFC is that there only one app which performs the role of manager, and this is a system app currently. It listens for when tags are discovered and lost ('nfc-manager-tech-discovered'& 'nfc-manager-tech-lost' system messages). This requires the 'nfc-manager' permission.

This app demonstrates how an app might communicate with NFC tags

Other gaia (and third party) apps are potentially involed in NFC. For example, when a contact record is received over NFC, the nfc-ndef-discovered web activity is fired by the system app, with the expectation that it is handled by a contact manager app (though this is up to the user to decide).

Checks in the parent (nfc.js) are performed to ensure that DOM functions require permission to access:

Note that an addition check is performed for the write case:

Note that this is only a preliminary design review since the code is still a work in progress.

NFS.js largely just passes values it recieves striaght down to NFCd. Maybe we want to do more validation here, but not sure what the implication of not doing this is.

No issues apart from others raised

App with permission can call close repeatedly to DoS NFC?

Any web page could initiate any NFC web activity. Probably would only be confusing to the user since it wouldnt work. Do we need to prevent this though? Likewise, any app could register to handle nfc activities without the permission. It wouldn't work (ie the app wont have NFC access without your permission, but may lead to issues). Maybe investigate alternatives to Web Activities, possibly put more UI into system app (similar to mozpay API or similar )