When you find a test that fails sometimes, you've hit an intermittent failure. This is the most annoying class of failures for both sheriffs and developers because it is not necessarily related to the code under test, but more likely indicates that the test itself might need to change to improve stability.

The test failure may have happened before and a bug may already be on file. In such cases, Treeherder should suggest the bug number and title under the failure, e.g.:

About ADB failures on Android

adb is a program which allows an external computer to control a phone, install software etc. ADBTimeoutError: The command didn't finish for an unknown reason, e.g. a connection issue. ADBError, ADBProcessError: Here one of the command the phone shall run failed. Each of the failures needs an own bug. E.g.

Intermittent raise ADBError("ADBDevice.__init__: ls could not be found")

means the program "ls" was not found. If it were a different program, a new bug should be filed.

The Test-Verify job tests if added or modified test files fail and runs them often sequential and in parallel in one or more sessions. To check if they also fail in their normal test suite, the test suite has to be identified. Search the log for the TV job for the test name and find e.g.

The test belongs to mochitest browser-chrome - the bc tasks on Treeherder.

Exceptions without logs linked from Treeherder

Tasks which failed with an exception have no job linked from Treeherder but still have a log in Taskcluster (setting up the task failed). To access it:

Don't retrigger or backfill build jobs or gecko decision tasks, only tests. If you are not sure if a failure line is a new frequent failure or even a perma-failure and require a backout of the change which causes the failure, you can request more runs of the job:

There is also a dashboard to check for permafailing tasks.

NOTE: Some test paths are not yet available. See source code. See "chunking" bugs under this meta bug.

Treeherder allows to filter the tasks by which test they ran:

Example: Btup builds started to also fail intermittently with the message from bug 1411358. The logs for these jobs showed no output before the timeout got hit, often even for more than 40 minutes. bug 1480494 got created and because the scope was only on that build type, investigation by developers started quickly.

The jobs classified as bug 1411358 - sort by "Test Suite" and look for Test Suite "opt" - showed the issue started on August 3rd while there had been many similar failure messages for other job types already before that.

If a task fails with a message mentioning "ADBError" or something which starts with "ADB" and ends with "Error", it's a failure returned by the phone which runs the task to the controlling computer. Each failure message needs its own bug (e.g. for "init failed", "failed to create directory" etc.)

If a crash mentions a file and a hexadecimal address, e.g. "application crashed [@ libxul.so + 0x17eb4ff]", instead of a function name like "application crashed [@ {virtual override thunk({offset(-16)}, mozilla::net::Http2Session::TakeHttpConnection())} + 0x2d]", the translation of the crash where the crash occurred from machine address to human-readable address ("symbolication") failed. Usually the files "libxul.so" (Linux and Android) or "xul.dll" (Windows) are mentioned and can be observed mostly on systems which limited memory, e.g. Android and Windows 7 (= 32-bit). In these cases, assume such a crash matches a bug suggestion about a crash if there is only one suggestion about a crash.

How to file a bug for an intermittent failure

If there's no bug on file, you'll need to file one.

A click on the little bug icon beside a failure opens a tool called "bugfiler" that automates most of the manual steps but you shall open the log and copy the relevant lines for the failure (e.g. from last TEST-PASS to the failure, or including the stack trace below the failure) and paste them in Treeherder's bug filing form.

The are two requirements need to be included in the bug that this bug can be displayed automatically by Treeherder when this intermittent failure happens again:

Lets imagine there are issues with bugfiler or you can't use it for other reasons (e.g. security sensitive bug which should not be public) and you have a test failure like TEST-UNEXPECTED-TIMEOUT | /navigation-timing/test_timing_xserver_redirect.html | expected OK in Treeherder and there is no bug on file for this failure.

This is a Webrender failure and belongs into Core :: Graphics: Webrender
If it cannot be identified where the bug belongs, put it in Firefox :: Untriaged

Treeherder syncs with Bugzilla several times a day. Once your bug is added and the systems sync, Treeherder will suggest your new bug as a match for the next intermittent failure of this type.

Machines can get into a bad or be in that from the start (e.g. bad memory). This will fall all or just more tests than usual, often in the same test type.

webgl ("gl") and reftests ("R") might fail because of dead pixels which can be far away from any content that gets rendered. In the following zoomed out example, the red rectangle is at the bottom and is a dead pixel which causes the test to fail. 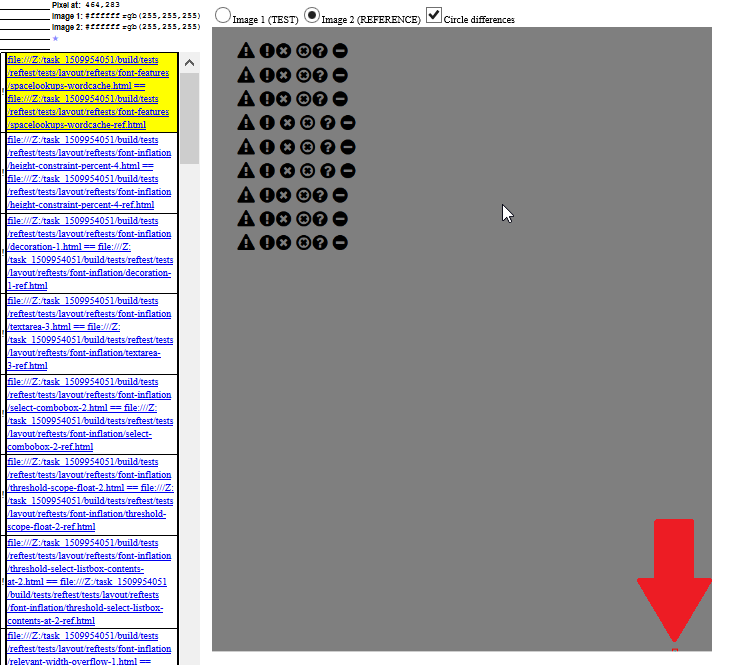 Terminate the machine if you discover such an issue:

See steps below if there is no Terminate button.

The new worker provisioner doesn't support terminating machines from the browser yet - the Terminate button is missing on the Taskcluster page and the provisioner name doesn't mention hardware (like in 'releng-hardware'). These machines have to be removed from the command line:

Terminating the machine from the command line:

Terminating all machines in a worker pool:

Save the worker pool name in a variable. In this case for wp=gecko-3/decision:

Run this script to terminate all machines in that pool:

How to file a security bug

NOTE: Treeherder supports the creation of security bugs from its bug filer. The process described below should be used if that feature stopped working or a bug has to be filed outside Treeherder

When we see failures which contains “use-after-poison” in the log, it usually means that we have to file a security bug for it. Security bugs are not visible except when you are on the CC list.

In the example above, the bug should be filed for the second failure line: “SUMMARY: AddressSanitizer: use-after-poison (...)”
Examples what to file as security bugs:

How to file such a bug:

NOTE: As the majority of things on Mozilla are judgement calls, when you encounter security bugs you can either file a bug or do a backout. Intermittent security bugs can be hard to tackle, so a backout could have a much more satisfactory outcome. In this case, the normal process is used: retriggers until you find the culprit then backout the revision which started the issue.

Note: If you need to leave a security bug for the next shift for a follow up, make sure to add one member of that shift on the CC list.

If it is necessary to check if an issue is related to Treeherder or Taskcluster, open an affected job by selecting it and then clicking on the task link at the bottom left. Is the job showing as expected in the Taskcluster page, Treeherder might not receive the (correct) data and the bug should be filed against Treeherder, else into Taskcluster.

Builds which shall ship to users of Nightly, Beta, Release and ESR use an existing push and schedule missing and additional tasks, e.g. startup tests and localized builds. These must all complete for the build to be regarded as "good to ship" (the tasks are grouped by platform and if they are for English en-US builds or other locales and shipping gets activated for each of those groups when its tasks complete).

To get the corresponding Taskcluster page for a Nightly:

If all tasks are listed under the green "Completed" category and the count for all other states is 0, the release should have shipped.