Please note that this page is not the official space for Eudora discussion and support. Instead of posting here, I would recommend posting your support requests and Eudora discussions on the Official Eudora forums at: http://eudorabb.qualcomm.com/forumdisplay.php?f=29

The Eudora OSE and Documentation Project pages both list features that are not found in Thunderbird. For the most part, these features are also found in the classic commercial versions of Eudora, though their implementation might not be identical. The Documentation Project page is a comprehensive index linking to detailed explanatory pages, while the main Eudora OSE page has feature summaries and thumbnail illustrations.

Since classic Eudora was a product that was developed continually over almost two decades, it's not really practical to compare its rich feature set to Eudora OSE (or Thunderbird).
Akahige 10:18, 27 November 2010 (PST) 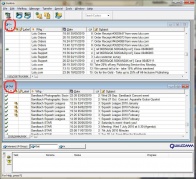 Old Eudora v7 showing inbox and outbox summaries, tiled one above the other
One of the features I most liked about the old Eudora v7, was the ability to display both the inbox summary and outbox summary, at the same time, one above the other (click thumbnail for details). Thunderbird does not do this, does anyone know whether Eudora OSE can? --Iantresman 09:57, 27 November 2010 (PST)

Eudora OSE can do something similar, but not floating them in the same window the way your screenshot shows. Under Tools > Options > Extras, simply uncheck "Open mailboxes in tabs" and mailboxes will open in their own separate windows.
Akahige 10:18, 27 November 2010 (PST)

I like being able to view all my recent incoming and outgoing activity, without having to click anything. I can also see messages I've sent out, in response to messages that have come in. --Iantresman 04:16, 14 April 2011 (PDT)

I love the multi windows as I have a few inboxes. I filter them via source and content. That way I can see if something just for me or something from a group, etc. Tabs are a waste as one has to click through each one to check everything. Go back to individual windows or at least an option.

As a note if I wanted tabs I'd use windows mail. I won't upgrade til the multi windows comes back.

As a note yes one can have them open in spearate windows but that means you seem to get separate copies of Eudora running and have to go to the task bar if I remember right when I tried it. Go back to the old way. Tabs are for the people that have small screens ie phones. I prefer the same as the 7 version. separate sub windows.

One thing that I have not yet figured out (by reading) is whether I have to "import" my current Thunderbird mail "set" after installing Eudora OSE - or whether it simply "takes it over"? I can see arguments both ways, but I would like to know "up front". Also, given that Eudora OSE is based on Thunderbird 3.0.4 and I currently have Thunderbird 3.1.7 installed (kept up-to-date by the automatic checking), will the import (or take over) work? Thoughts?

I use an old version of Eudora. When I Export to the new version, all mails get the same date, i.e. the date they were exported. Does anybody have a solution to this problem?

I use an old version of Eudora. When I Export to the new version, all mails get the same date, i.e. the date they were exported. Does anybody have a solution to this problem?

How can I back up Eudora OSE? Where are the folders/files that store the mail data? The old Eudora had TOC and MBX files. How does OSE work? Thank you.

Have you tried http://mozbackup.jasnapaka.com/ ? It works for postbox, which is a Thunderbird derivative wsm

That was a good idea. I tried it, but it wasn't able to back up Eudora.

Then I looked around in Eudora some more and discovered that if I right-clicked on the Local Folders>Settings it showed the location of the local mail:

I copied all the files in that folder & saved them. I *hope* that's all you need to back it up.

In the previous version of Eudora, when you highlighted a message in the Inbox, the message was automatically marked as read. In this version, it seems I have to manually mark each message. Is there any way to have the message marked as read without displaying it in its own window or using a menu to mark it?