The "More Images" section should be absent if there are none to be had. As for whitespace if there are only one or two -- I like the argument that this will encourage contributors to add more. More images are good - I think people use them quite a bit when deciding whether or not to install an add-on.

In the name of some progressive disclosure of function, we could have the QuickReview box activate as soon as the rating happens. It gets a little more room here, but I think that getting some small space for *some* kind of low commitment review is important. I've revised the link from the overused "Advanced" to "Detailed Review" -- this would link off to a review pages that offers more structure/suggested content as in fligtar's comment.

From Shaver's first comment, it sounds like it might be possible to see what extensions a user has, which would allow the latter two mockups. The Firefox bundling tool would allow the "Upgrade Firefox + get update" option -- I'll check into this. Tracking who has what for registered users isn't too compelling for me given its not keeping up with uninstalls and catering to a more sophisticated class of users who probably don't need the help as much.

Even if we can't do the bundling, we could still intercept people like this, perhaps: 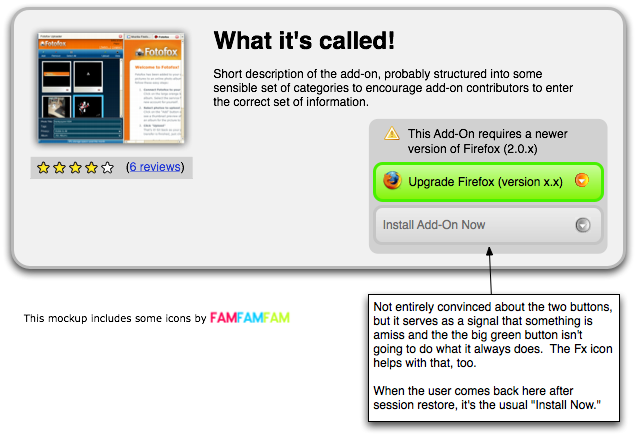 I think that we're all in agreement here -- the advanced information belongs on the page, but without the prominence of the sections already in the mockup. Expando-widget makes sense -- rather than a site pref setting the default to "expanded" we could instead assume that anyone who's bothered to log in would be happy to have the detail expanded by default and that for everyone else, the detail could be shut by default.

All duly noted. I'll turn my attention to the sandbox/not-much-tested/probably fine/recommended spectrum next.