The original goals of the Windows Theme Revamp Sprint/Project were to identify problems with the current Firefox UI and propose solutions to those problems. Initially emphasis has been placed on Firefox's visual appearance on Windows. Particularly Windows 7 and Vista (i.e. the future). Going forward we are going to look into the best ways to carry these ideas over to Mac and Linux as well.

Since restructuring the theme touches and depends on so many other elements the project has expanded slightly in scope. It now encompasses not just the current visual style, but also how best to handle UI placement, arrangement and also the evolution of some new features.

After a few iterations, and a lot of discussion, the UX team has settled on a firm initial direction to be implemented in Firefox 3.7. This direction is at the UX team proposal stage, to be approve by drivers and subject for constructive community feedback.

As noted on the 3.0 Windows Default Theme Issues Wikipage, Firefox feels dated and behind on Windows. Especially Vista and Windows 7. These issues include absence of Glass, anemic purple toolbar color on Vista, tall and bulky UI footprint, element overload, inconsistent toolbar icon usage/style, lack of a tactile look & feel and perhaps too great of a divergence between the look on XP and Vista/7.

The proposed direction to correct these shortcomings includes:

Hiding of the Menubar 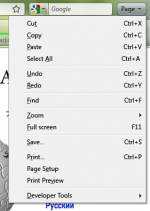 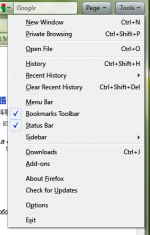 Starting with Vista, and continuing with Windows 7, the menubar has been systematically removed from Windows applications built by Microsoft and other vendors. It has been replaced with alternatives like the Windows Explorer contextual strip or the Ribbon found in Office 2007. The Ribbon UI is now also used in Paint and Wordpad for Windows 7. Many apps still retain the menubar as an option to be pinned or to be shown briefly by holding the Alt key.

Firefox isn't the type of application that necessarily has contextual actions in the same way Windows Explorer does. So how to handle the functionality of the menubar if it is hidden? Chrome and Safari (and to a lesser extent IE7 & 8) have solved this by sorting, trimming and collecting the menubar functionality into two separate buttons. One of these buttons has items that apply to the webpage and another to the application itself. Now they don't always agree on which item should go in which menu, but the general principal is sound. This is a good solution.

The menubar as a UI is pretty good at one thing: hiding complexity. The general purpose of the menubar is to contain all of the things that you want your program to do but you can't(or shouldn't) cram into the main UI. So the menubar generally ends up with a lot of stuff that isn't used very often, if at all, and yet is reproduced on every window and takes up a significant amount of real estate. It also has the tendency to become a dumping ground for new or hardly used features. This experience can be made worse with sub-menus, or even sub-sub-menus, which are hard to find and hard to target.

The approach applied to this problem has been to:

This is being documented on the Menu Cleanup wikipage.

The main goal here was to achieve parity with Vista and Windows 7. Secondary goals were to cleanup the menu, reduce space taken by the menubar and make way for future UI options like tab-on-top. Less UI space = more content space.

A goal going forward is a smarter placement/discoverability of features so that they don't have to be hidden away in a menu. Population of the Page and Tools buttons should be considered carefully.

By default there are four separate ways to access bookmarks in the main Firefox window:

This creates a few problems:

Basically, how to combine bookmarks and plan for different use cases.

There are additional suggestions for this in 4.0.

The Stop and Reload buttons have mutually exclusive functionality. Yet we have a separate button for each.

Merging stop and reload would free up more toolbar space and reduce the amount of buttons on by default. This is particularly important because of shifting functionality caused by the hiding of the menubar.

A common complaint about this is the use case where someone might go to hit the stop button on a seemingly hung page as it just finishes loading only to hit refresh again instead. To solve this there would be a slight delay between when a page is finished loading and available for refresh again. Accompanied by a crossfade between the Stop and Refresh icons.

In the Customize page there would be an option to add a separate Stop and Reload buttons.

The home button at present functions pretty much exactly like a bookmark. Yet it has its own dedicated place in the default set of toolbar buttons. It's not entirely useful and takes up prime real estate.

For 3.7 we would like to create a "Home Tab". Moving the functionality of the home button to a persistent "mini-tab". This tab, for 3.7, would just take you to your homepage. Any links clicked on this page would spawn a new tab. This would serve as a good introduction to tabs for users not accustomed to them.

There are further plans for this as well as "App Tabs" which will be discussed for 4.0.

A progress bar can make waiting seem slightly less painful and let you know if something might be hung-up or not. It won't actually make things faster, but it might make them feel faster.

Instead of the indeterminate progress indicator in use now, we would like add a progress "line" under the location bar on the active tab and at the top of each background tab. This will let people know about how much longer their background tabs have until they load and it also looks cool.

An intermediary step in the redesign of the notification system is also planned for 3.7.

This intermediary design will leave all browser level notifications as Notification Bars. This includes:

Page level notifications will be integrated into the Site Button (currently home to Larry). As well as floating "panel" notifications.

A more full implementation planned for 4.0.

You are trying to make Firefox look like Chrome/Safari/IE/Opera:
We are not trying to make Firefox look like any other browser. Firefox is Firefox. Similarities between browsers are unavoidable. They all have shared lineage and are based off of their predecessors. The basics of what a browser does and how it does it is already established. Browsers are all trying to solve the same problems so evolutionary ideas that are similar are inevitable.

With that said, just because an idea didn't originate here doesn't mean it isn't a good idea. Platform trends and conventions are sometimes good to follow. There are plenty of ideas being worked on for Firefox that are innovative and novel.

Other applications don't hide the menu bar so how is this maintaining external consistency?
Maybe it would be better phrased as "emerging external consistency". As of Windows 7 the most popular user facing prepackaged applications (and Office) ship with the menubar off by default. If it has one at all. Whether Photoshop or AutoCAD ship with menubars isn't necessarily relevant. For one they are different types of applications and for another they don't have a ubiquitous competitor ship with the OS (IE).

While thinking about UI changes for Firefox 3.7 we simultaneously thought about where we wanted to take 4.0. These designs are envisioned as evolutionary steps. This serves two purposes: easing the transition and allowing adequate development time for platform capabilities.

This is a tentative direction of things we would like to see happen in 4.0. These directions are still in early brainstorming and proposal phase, and broader suggestions and ideation is welcome.

A primary goal of the 3.7 update is to improve how Firefox looks on Windows. This will be carried forward to 4.0 with refinements but no major changes.

Several major additions and changes are being discussed to the UI for 4.0. Keep in mind these changes are farther out and therefore more in flux than ideas for 3.7.

Merging the LocationBar and SearchBar

The AwesomeBar already has a lot of search functionality, even though it is currently only local. These fields have a convergent function: finding things. Merging these and including something like Taskfox will put search in a unified location with added utility. It will also reduce toolbar complexity/clutter by merging functionality.

Merging Stop/Refresh/Go Into One Button

Merging these into one button and attaching them to the location bar gives them context. A secondary benefit is that it combines like functionality and removes another toolbar button.

A common concern about this is that it would increase targeting time by moving the refresh/stop buttons so far away from the back/forward buttons. That really depends on where you are moving your mouse from however. If you are typing in the URL bar and moving to hit the go button then you are already in the right spot to hit stop if you change your mind. However if you are hitting back or forward and then want to hit stop/refresh it is far away.

This is a legitimate concern but it's hard to say how it will work out without observing it.

In the Customize page there would be an option to add a separate Stop, Reload and Go buttons.

The tabs-on-top option would allow:

retain the option to have have tabs-on-bottom. Also potentially tabs on the left or right side in a thumbnail or list style view.

The idea behind "App Tabs" is that some web apps are more like applications than web pages. For example, Google Docs, Gmail, Acrobat.com, MobileMe, 280 Slides, etc. Things you would want to have open all the time and they could potentially be chromeless since you don't navigate through them with back/forward. Sort of like built in Prism. If, say, you wanted Gmail open all the time without chrome you could drag it to the left and pin it thus making it an App Tab.

There would also be some other way to make an app tab besides drag/pinning it to the left. For instance a contextual menu item.

The Home Tab introduced in 3.7 will start to be slightly more than just a link to your home page. It turns into a dashboard like page. It could potentially have your top bookmarks, about:me stats, history timeline, recently closed tabs, change styling on major local holidays, or more.

If a user hasn't altered the bookmarks bar past the default, it will be hidden and the bookmarks widget moved to the navigation bar. If they have it will remain the same.

This will free up some more vertical space for content and remove visual clutter of an element that isn't being used.

The bookmarks bar could of course be turned back on.

A redesign of the notification system is planned for 4.0.

This design will remove notifications bars. Integrating persistent notifications into the Page and Tools buttons. As well as notification panels and activity indicator panels.

The status bar currently takes up a lot of space on every window. The full link description is used by some but not all. The progress bar can be duplicated elsewhere. It is also currently a catch-all for a great many extensions. As well as being at the bottom of the window away from the rest of the UI.

If the status bar was removed the functionality could be relocated and streamlined to other parts of the UI:

An alternative proposal would be to turn the status bar off by default. Move the existing functionality away and only turn it back on if an extension that uses it is installed.