Note: this may fit in to the brand toolkit project as part of codifying our font system. 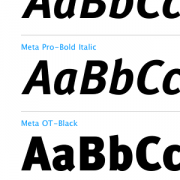 Mozilla branding uses the FontFont Meta font for logotype. However, FF Meta is a proprietary font with a closed license.

It is felt that it would serve Mozilla's goals best to search for a free and open alternative to FF Meta.

A free and open font becomes especially important when it comes to extending the Mozilla brand to it's web properties through the use of css3 @font-face embedding. FF Meta cannot be included in a Mozilla project without compromising Mozilla's goal of distributing only open-licensed code (where is this goal stated? -ned).

If you are interested, you can read a long-form discussion of the issue on the Drumbeat discussion group here: http://groups.google.com/group/mozilla.community.drumbeat/browse_thread/thread/93ead76b1e4c4993

This brings up a few questions:

An ideal overall solution may be:

There are two basic approaches to selecting a font for mozilla; reach out to foundries we are interested in (proactive) or open up applications as a competition / RFP / open call (inclusive).

Regardless of the selection process, we need to decide: Adopt an existing font or Partner with a foundry and start from scratch?

One solution is to find a font or set of fonts that Mozilla adopts and recommends for use in websites. There are a number of sources that list fonts that are available with varying degrees of free and/or open licenses.

Many of the free fonts are free for a reason; they are incomplete or are hard on the eyes.

Another Possibility would be to commission the design of an open font similar to Google's commissioning of Droid Sans.

Finally, a blend of the two would be to select a currently available free font and work with the foundry to flesh it out.

It has be suggested that Mozilla could host one or more fonts for use by others. This would tie in with the typography solutions above. Upon selecting a font to be used in Mozilla websites, said font could be hosted to others in the mozilla community.

Fontue is an open source Font Server Developed for use at Kernest.com. The project is hosted on github.

We need to address issues related to hosting;

Already there are a few fonts that have been adopted in the Mozilla web universe:

Museo is a great font, has serif, slab-serif and sans serif variations. Unfortunately the free members of the font are pretty limited: there is only one weight in each variant available, and the license is not very permissive.

Created for the Open Handset Alliance, Droid is a nice, quiet serif. It is very readable, but it doesn't have a huge amount of character, though it's open letterforms are attractive. The font is also limited in it's range, lacking italics in the sans-serif .

PT Sans is not in use anywhere in Mozilla yet, but it is open and similar in feel (though inferior) to Meta; it is a humanist sans-serif with an inviting and fun character while maintaining clarity.

There was interest in this topic and an agreement that the idea of creating a more consistent font style is worth working on. In terms of timing this looked like something to look at more seriously in 2011 due to scheduling issues for the rest of 2010, although we talked about things that could be done now for anyone interested in driving things forward.

One of the reasons for the delay is that a Mozilla and Firefox brand study is being done now and we should see the results of that before making decisions that could effect logos and sites. Another reason was that web projects for the end of the year are already under way that include the Meta font and we don't want to delay those because of this font discussion.

In the meantime though, we can do research on available open fonts that might serve some or all of our needs and we can also look into the technical issues with serving an open font in a way that could be re-used widely in the community. Neither of these things depends on what the final font choice will be so we aren't blocked by not knowing the answer to that now (for instance, we can set up a test font and change to a different font later for production use.)