Allow third parties to verify that all Firefox binaries are public, i.e., that they have gotten the same version as the rest of the world and not a special, possibly compromised version.

This can serve as a foundation for later work to verify that the distributed binaries are faithfully built from the Firefox source code (e.g., via reproducible builds).

"Sunlight is said to be the best of disinfectants; electric light the most efficient policeman." -- Louis Brandeis [1]

One of the major promises of open-source is that you know what’s in your software. However, in practice, people almost always download compiled binaries of Firefox and take binary updates -- with no assurance that these binaries actually correspond to the Firefox source code. We need to provide this assurance in order to guard against the use of our systems either to ship large-scale malware or to deliver targeted bad updates to specific users.

Work is ongoing to strengthen internal controls so that it is less likely that the build chain will be subverted by malicious actors. The goal of this work is to provide external controls that will bound the impact of any compromise as well as protecting against deliberate action by Mozilla (e.g., as a result of coercion).

The first step in establishing this control is to ensure that all Firefox binaries are logged in a publicly verifiable log. This ensures that when users download Firefox, they can verify that their copy of Firefox is the same one that we gave to everyone else, and not a special copy just for them. Public logging is also the foundation for the second step, which is for the Firefox updater to automatically verify that updates have been logged before accepting and installing them.

Once we have ensured that everyone gets the same binaries third parties can analyze these binaries to verify that these binaries are faithfully created from the Firefox source code. However, this verification work is not the immediate focus of this project.

This document lays out the overall architecture for the binary transparency work we are doing in Firefox. For progress, please see the meta bug and the tracking bugs linked below.

When a release of Firefox is created, we need to log a description of that release to a publicly verifiable log. The approach we are taking here is to layer this Binary Transparency system on top of the existing Certificate Transparency system, by computing a hash value that summarizes the release, putting that value in a certificate, and logging the certificate. Then a third party can verify that a binary was logged by verifying that the binary is included in the Merkle tree with the tree head in the certificate, then verifying that the certificate was logged.

When a beta or release version of Firefox is created, there is already code in place to create a SHA512SUMS file, with a SHA-512 digest of each binary included in the release; there is [work in progress] to produce an equivalent SHA256SUMS file. The logging process starts from that file.

To verify all of the binaries in a release, the verifier can take the following steps:

Once Firefox releases are being logged, the Firefox updater should not accept an update unless it comes from a logged release. In order to do this, the updater needs sufficient metadata to perform the verification. Rather than sending out the whole SHA256SUMS file (around 500kB), we will send out an inclusion proof for the update (around 300B). 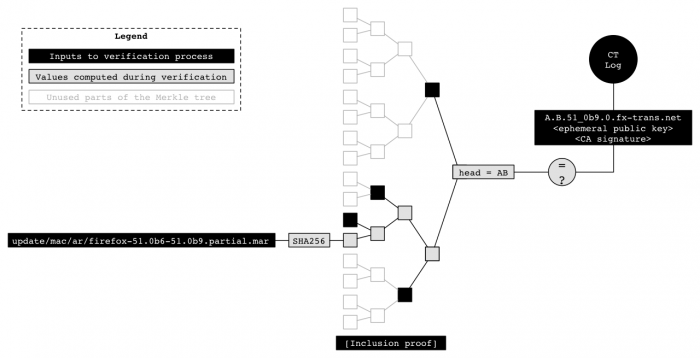