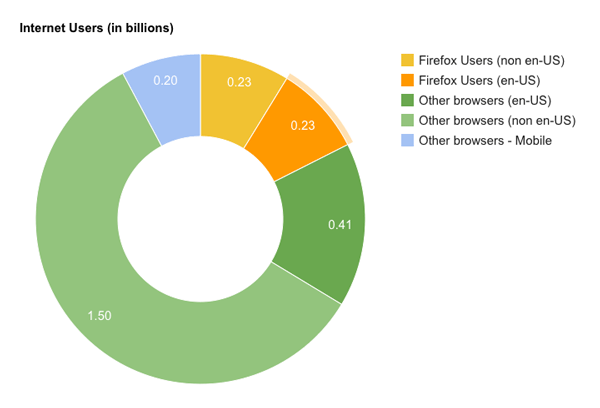 Everyone wants to learn:

For the most part, Mozilla Support focuses on what Firefox users want to learn. When you factor in localization (60% coverage) we're only addressing about 15% of Internet users. User Engagement and Product Marketing, also focuses in this area along with the things that potential Firefox users want to learn. Still, there is a lot of overlap between the three. The Mozilla Foundation, though the Webmaker program, address how the internet works but at a level that's pretty advanced in comparison to that of the vast majority of Internet users.

There is huge gap here. By addressing how computers work and how the Internet works (in more than just English), we can potentially make a difference with more than a billion additional people.

People who are savvy about computers and the Internet are better able to make informed choices on the Internet. They appreciate things a browser that takes their privacy seriously. And because they understand how things work, they don't need technical support the first time things go wrong. When they do need support, they're better able to articulate and find the kind of help they need.

Currently, Support, User Engagement and Product Marketing work together in a few ways but there's some duplication of effort and no overarching vision. Imagine if we worked together to identify a course of material then collaborated on creating and localizing that material so that it could reach and enrich not just people who use Firefox but everyone who uses the web.

What types of things am I talking about?

Something like a new user tour of Firefox would be awesome but that is too specific - that's a Firefox user/potential Firefox user thing. Better handling of in-product help is also a Firefox user thing. Those should be Firefox features and handled as such. This would have to be general (how do computers/the internet/email/webpages work?) and browser/platform agnostic.

Google has done a few things in this area: