Note that the changes proposed here are preliminary, and will be updated as the result of conversations with interested parties.

These changes assume that the current API documentation is an accurate as-built description. In particular, we assume that the following statement is true: "You can currently authenticate by sending a valid Firefox Accounts assertion or a valid Hawk session," where "valid Firefox Accounts assertion" includes the MSISDN-based assertions generated by the MSISDN verification server.

To facilitate the display of a "friendly name" to the calling user, the link generator needs to be able to include this information to be associated with the link. See bug 1025779

In addition to the changes detailed above, we need the following API methods to be added so as to facilitate the functionality required for MVP.

This is used for outgoing calls initiated by the standalone client only.

To facilitate the display of a "friendly name" to the calling user, the link clicker needs to receive this information before committing to the call. See bug 1025779. This is done by retrieving the called-party name from the Loop server using a GET request.

For security purposes, it is important that these GET requests honor URL revocation -- if a URL has been revoked, attempts to get the called party name must fail.

New Operation -- In discussions with Darrin, it has been assumed that the link generator can update the information associated with the link at a later time.

This operation allows the properties associated with the given token to be modified.

The following existing operations are deprecated in favor of the WebSockets interface described below. They may be removed in a future version of the API:

Several MVP use cases necessitate the ability to communicate information about the state of a call during its setup phase from the server to the clients, as well as a means to convey call setup control information from the clients to the server. These use cases include: 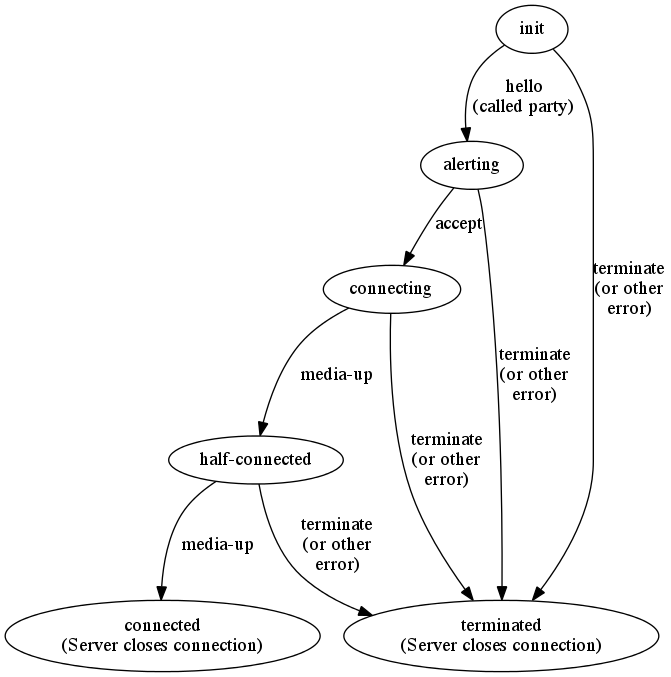 Upon connecting to the server, the client sends an immediate "hello" message, which serves two purposes: it identifies the call that the progress channel corresponds to (using the "callId"), as well as authenticating the connecting user, so that they can be verified to be authorized to view/impact the call setup state.

Note that the callId with which this connection is to be associated is encoded as a component of the WSS URL.

If the hello is valid (the callId is known, the auth information is valid, and the authenticated user is a party to the call), then the server responds with a "hello." This "hello" includes the current call setup state.

If the hello is invalid for any reason, then the server sends an "error" message, as follows. It then closes the connection.

The server informs users of the current state of call setup. The state sent to both parties is always the same state. So, for example, when a user rejects a call, he will receive a "progress" message with a state of "terminated" and a reason of "rejected."

During call setup, clients send progress information about their own state so that it can be reflected in the call state.

To provide for forwards compatibility, clients must be prepared to process "terminated" progress messages with unknown reason codes. The reaction to this situation should be the display of a generic "call setup failed" message.

If the server receives an action of "terminate" with a reason it does not recognize, it copies that reason into the resulting "terminated" message.

The server uses three timers to ensure that the call created by a setup attempt is cleaned up in a timely fashion.

After responding to a POST /call/{token} or POST /call/user message, the server starts a supervisory timer of 10 seconds.

Upon receiving a "hello" from the called user, the server starts a ringing timer of 30 seconds. If the called user does not send an "accept" message in this time period, then both parties will receive a "progress"/"terminated" message with a reason of "timeout".

Upon receiving an "accept" from the called user, the server starts a connection timer of 10 seconds. If the call setup state does not reach "connected" in this time period, then both parties will receive a "progress"/"terminated" message with a reason of "timeout".

Every client message triggers a response from the server: "hello" results in "hello" or "error"; and "action" will always cause a corresponding "progress" message to be sent. When the client sends a message, it sets a timer for 5 seconds. If the server does not respond in that time period, it disconnects from the server and considers the call failed.

After sending a "media-up" action, the client sets a timer for 5 seconds. If the server does not indicate that the call setup has entered the "connected" state before the timer expires, the client disconnects from the server and considers the call failed.

We may wish to let users configure the maximum amount of time the call is allowed to ring (up to 30 seconds) before it considers it unanswered. This timer would start as soon as user alerting begins. If it expires before the call is set up, then the called party sends a "action"/"disconnect" message with a reason of "timeout."

Although there may be some marginal benefits to keeping the WebSockets connection during the course of an ongoing call, the current design does not do so (however, it leaves open the possibility of doing so in the future, if necessary). This trade-off is made out of concern for scalability: at present, the servers on which the Loop Server are being deployed have hard connection limits that are not conducive to connections lasting as long as ordinary conversations do. Note, however, that the decision to distribute the WSS URLs as part of call setup is being done, in part, to facilitate scaling the number of servers up to arbitrarily large cluster sizes.

The server timers, described below, make it impossible for any of these connections to stay open for longer than 45 seconds. In practice, unanswered calls may result in connections for as long as 30 seconds; although these will typically be abandoned by the calling user well before this time. Answered calls will be anywhere in the range from 0 to 30 seconds.

Although the application of circuit-switched techniques to a monolithic VoIP setup is not completely appropriate, it's a good first-order approximation until we have better information about actual calling patterns. To that end, we will be calculating Busy Hour Call Attempts as BHCA = offered traffic * 3600 / avg hold time. This is likely to be far more conservative than actual calling patterns for Loop.

During the UX discussions for MVP, several issues were raised that necessitate moving away from the model in which all state is encoded in the URLs themselves. In particular:

Further, there are several use cases which, while not formally requirements yet, are likely to be required in future product releases:

These requirements have the following implications:

The token portion of "call me" URLs serve as bearer tokens that represent both addressing information for the user as well as authorization to call that user. While making them cryptographically strong against guessing is likely overkill, we do want to make guessing valid tokens to be sufficiently difficult that they cannot be trivially used for the purpose of generating large volumes of unsolicited calls.

Assuming a user base of ~500M users (29 bits), generating one URL a day, each with an expiration of one month (5 bits), we're using 34 bits of information for uniqueness. Pulling a "reasonably large" value out of thin air, it seems that requiring an adversary to attempt over a billion (30 bits) call attempts before successfully guessing a valid token would be a reasonable deterrent.

Given these assumptions, then, 64 bits of information in the token should be sufficient for both addressing and for deterring unwanted calls. If Base64 encoding is used, this yields tokens that are 11 characters long.

MLP and MVP version are not compatible.

Since there is only nightly users on MLP (Loop 0.5.0) and that it only handle call-url, all old call-url will stop working and defined as expired.

During the transition from MLP to MVP all old user will have to recreate call-url in order to get the new format.

The initial plan was to have both URLs working during a month to smooth the transition but it doesn't worth it with regards to the number of existing call-urls.

This section is not yet completed See http://dev.w3.org/2011/webrtc/editor/webrtc.html#identity