To monitor the performance and other aspects of the Loop service, we will be gathering information independent of the platform metrics. The list of collected metrics will be expanded in later phases of the project.

Mozilla has a number of data collection services, including:

The collected data is broken down into these categories below.

For simple telemetry that can be indicated by a simple scalar or boolean, we will be using the nsITelemetry interface.

For custom collected telemetry, the basic steps to be performed are:

In general, this report will look something like the following:

One of the first and most important bits of information we need to gather is ICE failure information. When we initially launch the MLP, it is quite likely that we will see non-trivial connection failures, and we will want to be in a position to rapidly diagnose (and, where possible, fix) the causes of these failures. To that end, we need to be able to get to the ICE statistics; and, if a call fails to set up (i.e., ICE connection state transitions to "failed" or "disconnected"), upload ICE logging information.

This covers collection of the following information:

This will use normal telemetry peg counts. Details for the data to be collected are in the bug.

The built-in client will have a screen similar to this pop up when the user finishes a call: 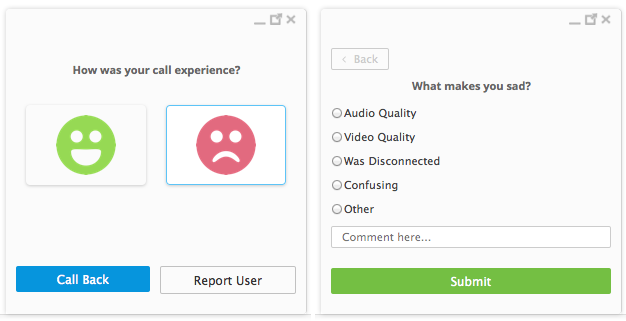 The link-clicker client will have a similar screen for call completion.

Based on bug 974873, the current feedback proposal is as follows:

For the standalone client, we will report the "happy" boolean; and, if false, indicate the reason using the "category" field and the user-provided input in the "description" field. We will also include the URL that the user clicked on to initiate the call (without the call token) in the "url" field. The key reason for doing so is that it allows us to distinguish standalone feedback from build-in client feedback. Secondarily, if we change URL endpoints (say, due to versioning), it allows us to distinguish reports from two different kinds of server. Because of the shortcomings of the individual fields in the standard userAgent object, we will report the entire user agent string for the standalone client (i.e., the value in navigator.userAgent).

For the built-in client, we will report the "happy" boolean; and, if false, indicate the reason using the "category" field and the user-provided input in the "description" field. We will also report channel, version, and platform; see the fjord API documentation for more information about these fields.

An example payload for a standalone ("link-clicker") client:

An example payload for a built-in client:

Note to self: we also are going to want to collect information about graphics card drivers, sound cards, webcam drivers, etc. This is TBD.

This data collection is intended to handle the following use cases:

When the user indicates an issue, the Loop client will create a ZIP file containing information that potentially pertains to the failure. For the initial set of reports, it will include the following files:

The report IDs will be formed by appending a UUID to the string "le-".

The index file is a JSON object with the following fields:

No existing Mozilla data ingestion systems provide a perfect fit for the data that these user reports will contain. Instead, we will create a very simple system that has the ability to grow more complex as needs evolve.

To that end, we will be using Microsoft Azure blob storage for the report upload and storage. The Loop client will perform PUT requests directly against into a blob container. Azure includes an access control mechanism that allows servers to hand out time-limited signed URLs that can then be used to access the indicated resource.

When a user indicates an issue, the Loop client collects the data from the index.json file (including a unique issue ID selected by the client), and contacts the Loop server asking for a new URL to store the issue report in:

Note: the ID is client-provided rather than server-generated to allow for the "retry-after" throttling behavior described below.

Upon receiving such a request, the Loop server performs the following steps:

To mitigate potential abuse, the Loop server needs to throttle handing out issue URLs on a per-IP basis. If a Loop client attempts to send a request more frequently than the throttle allows, then the Loop server will send an HTTP 429 response indicating how long the client must wait before submitting the report. The client will then re-attempt sending the report once that period has passed.

This means that, upon startup, the Loop client code needs to check for outstanding (not-yet-uploaded) reports, and attempt to send them. If a report is over 30 days old and has not been successfully uploaded, clients will delete the report. The Loop server will similarly check that the issueDate field is no older than 30 days, and will reject the request for an upload URL.

(TBD: basically, the Loop server stores the JSON index object in an Azure table so that developers can search for reports by various criteria. If the client-provided report ID already exists and a file exists in blob storage, the client gets an error)

If the client receives such an error, it should assume that the report was previously uploaded successfully without being removed for its own local storage, and deletes the local file.

The blob URL fields are constructed as follows:

This URL is then returned to the user:

Once it acquires an issue upload URL, the loop client then performs a PUT to the supplied URL to upload the report zipfile. The Azure REST API documentation contains more detailed information about this operation.

To retrieve reports, authorized developers will need to be able to perform the following operations:

Aside from satisfying those two use cases, and enforcing that only authenticated and authorized developers have access, this interface can be very rudimentary.

At the end of each week, a data retention job will locate containers with a name indicating that they exceed the data retention policy for these reports (five weeks), and remove the containers (including all contained reports). Note that this means that raw data will be kept for between 28 and 35 days, depending on the day of the week on which they are submitted.

This job also removes data from the index table older than its retention policy (which may be somewhat longer than the retention policy for the raw data; this is still TBD). (TODO: table removal can probably be optimized through the use of partitions -- I need to look into Azure table storage a bit more).