All those change made a big difference. Last week, 1490 checkins were landed, and all systems held above 90% for the week!

Please give thanks to RelEng/ATeam/IT. specifically the following:

The project needs more people to use Thunderbird Beta - it can be obtained from http://www.mozilla.org/en-US/thunderbird/channel/ 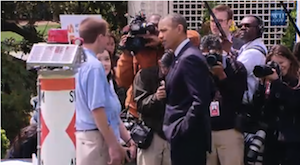 Hacking at the White House: introducing Maker Party 2013
We’re extremely excited to be participating in today’s White House Science Fair — and even more excited to have President Obama help us kick off our new summer-long Maker Party: thousands of community-led events around the world to celebrate the amazing things we can make and learn thanks to the Web.

Was a light week from the Engagement/Web Production projects' side, due to their work week