Smart Screen is comprised of smart-system, smart-home, app deck, device deck, tv deck, and dashboard. This document tells: how to run the smart-screen in Firefox Nightly and B2G, and the design of Card UI and smart-system.

Run in Firefox Nightly or B2G

Before building the code, we may need to clone the gaia repo with the following command:

The smart screen is a type of TV. We have to use GAIA_DEVICE_TYPE=tv to tell build script to build for TV:

If you had built other builds before, we should suggest you to clean the profile folder:

Please note we should have a folder called profile after the make finished and should have profile-debug if we also add DEBUG=1.

Unfortunately, Nightly is no longer a supported developing environment for B2G.

There were some issues in Firefox Nightly to prevent running Gaia in it in past few weeks. There is a new framework called Mulet which enables some missing modules for Firefox OS. We have to download the mulet enabled version, named firefox-36.0a1.en-US.xxxxxx, at:

It is easy to tell the difference between normal one or Mulet enabled one. We may find the default start-up path is chrome://b2g/content/shell.html . If you still get the empty search/url box, you are in normal firefox nightly.

The following is an example to run Smart Screen in Mulet:

If we want to run the DEBUG build in Mulet, we may use the following commands to build gaia:

Running in B2G desktop is relative easy to Mulet. We may need to download the B2G desktop, named b2g-36.0a1.multi.xxxxxxx at:

Similar to mulet, we can run the Gaia in B2G desktop with the following command:

Card UI is the main feature of smart screen. It comprised of smart system, smart home, app deck, device deck, tv deck, settings app, browser app, and dashboard app. Bookmarks or short-cuts in smart home are CARDs. All decks has the ability to create a card to smart-home app. All decks and apps are normal app in smart-system app. Their relationships can be found as the following figure: 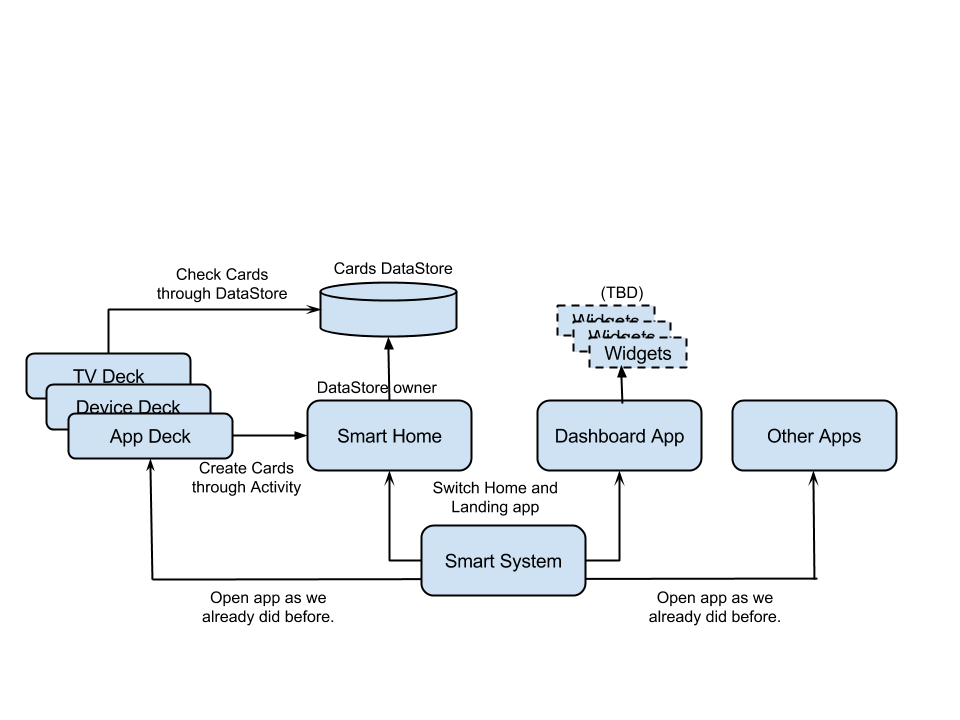 The card can be deleted from both deck and smart home. If card is asked to be removed from a deck, the deck sends a mozActivity to smart home app to remove it. If a card is removed from smart home, the deck may know it by read the record from data store or listen the change event of data store.

As per the design of mozActivity, system app always opens a activity window for it. But card removed from deck app should not have a transition to smart home app, according to UX spec above. We may let data store be writable or send a mozActivity to smart system app and send an IAC message to smart home app to tell that. And this is a workaround to archive that. (THE WORKAROUND IS NOT DECIDED, YET)

According to UX/VD, we will change the behavior of window manager, including the landing app support, animations, launching position, etc. (THE DETAILED CHANGES IS NOT DECIDED, YET.)

Decks are apps with the ability to PIN A CARD TO HOME and the pined cards are grouped by decks. All decks will be shown at smart home app by default. 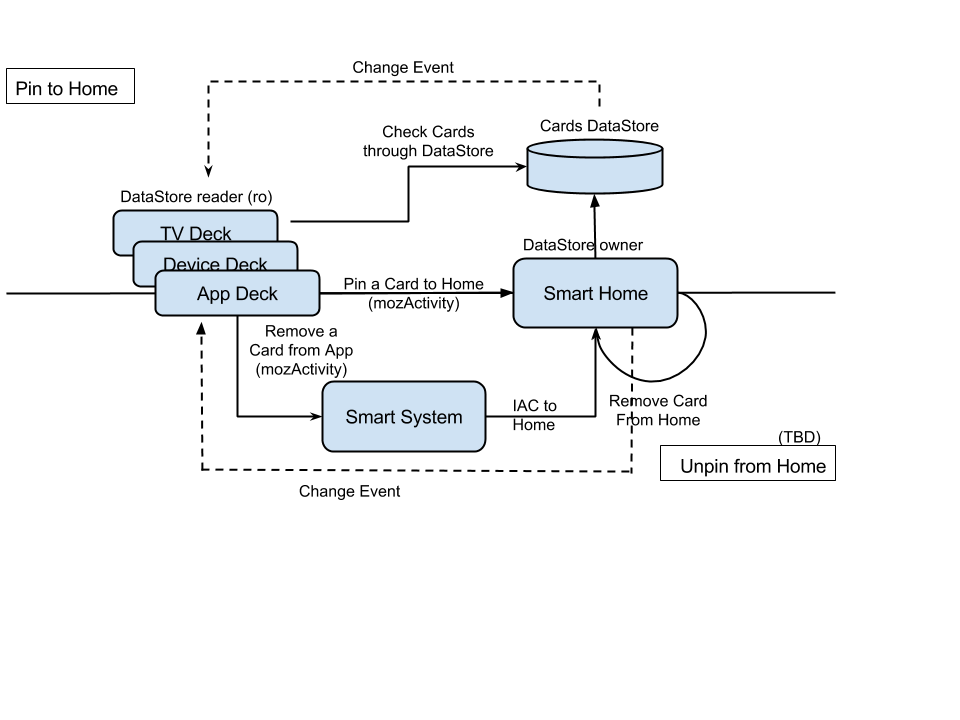 A deck can use mozActivity to pin a card to home and should declare the data store permission to query if an launch path is pined as a card.

A launch path may point to the deck app itself or to another app's launch path. Like TV deck, it may pin a channel as a card whose launch path may the same as TV deck with hash included, ie: apps://tv.gaiamobile.org/#66, please find the following example:

Or app deck may pin an app as a card whose launch path may be apps://otherapp.gaiamobile.org/index.html, like the following example:

As per UX spec above, we need a consistent pin/unpin menu among all decks. To achieve that, we use system context menu which is based on MENU tag. An example can be found at: