RTSP (Real-Time Streaming Protocol) provides initiation and VCR-like control of streaming presentations. RTSP was standardized in 1998. RTSP builds on existing standards: It closely resembles HTTP in operation, and it can use SDP for session description and RTP for media transport.
For more detail about RTSP, please refer to http://en.wikipedia.org/wiki/Real_Time_Streaming_Protocol and RFC 2326.

The complete multimedia protocol stack is illustrated in this figure, which shows the relationship between the RTSP/RTP framework and the supporting setup and control protocols.

Various call setup, control, and advertisement protocols can be used to start an RTP session, depending on the application scenario:

Session Description Protocol (SDP) is a means of describing the session, which conveys information such as transport addresses on the media flows, the format of the media, the RTP payload formats and profile that are to be used, the times when the session is active, and the purpose of the session.
SDP is in text file format, so it is human-readable and can be easily parsed.

RTP payload formats define how particular media types are transported within RTP. Payload formats are referenced by RTP profiles, and they may also define certain properties of the RTP data transfer protocol.
For a complete list of RTP payload formats, refer to http://en.wikipedia.org/wiki/RTP_audio_video_profile.

For unsupported payload formats, such as MP3, an error message will be displayed on the browser.

This class diagram illustrates the most important components in our current RTSP framework. We can divide the framework into four major sub-modules: 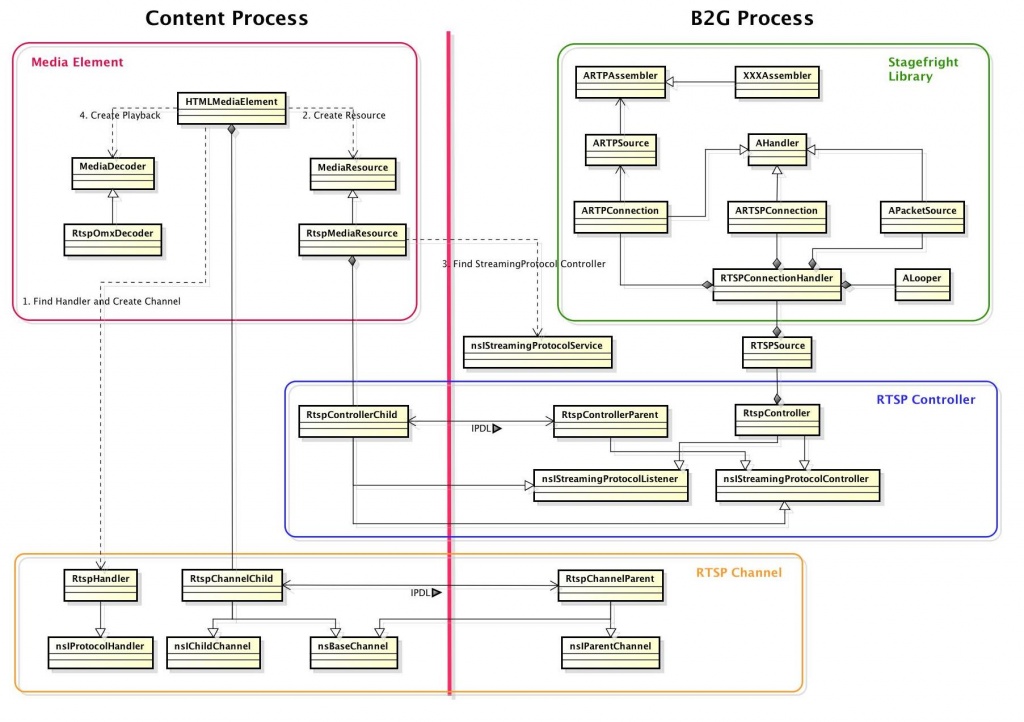 RtspMediaResource provides an interface to deliver and control RTSP media data to RtspOmxDecoder.
Note that the design and behavior of RTSP streaming are quite different from HTTP streaming. Please refer to the comments in RtspMediaResource.h for more detail.

Unlike other channels in Necko, RtspChannelChild is a dummy channel used to aid MediaResource creation in HTMLMediaElement. Network control and data flows are managed by RtspController objects, which is also responsible for IPC with the parent process.
For now, the existence of RtspChannelParent is only to support HTTP->RTSP redirection.

We reused the stagefright library from AOSP. Source files for RTSP client were mostly ported to the folder "netwerk/protocol/rtsp/rtsp".
However, please note that currently we still depend on the utilities from Android foundation, such as ABuffer, ALooper and AMessage, etc.
The class RTSPSource is used directly by RtspController to perform operations, such as establishing RTSP connection and sending RTSP requests.

This sequence diagram illustrates a series of actions involved in closing RtspMediaResource.
This digram also reveals the components and their relationships between HTMLMediaElement and RTSP modules.

The following information is extracted from this reference.

In certain scenarios, the best-effort, dynamic port methods of UDP-based RTP, as described previously, are not suitable. Some environments might consider the allocation of dynamic source and destination UDP ports through firewalls to be something they can live happily without. Moreover, just the nature of the Layer 1 and Layer 2 transport mechanisms underlying the data delivery might not be suited to nonguaranteed UDP traffic. In either instance, RTSP allows for the negotiation of the RTP delivery of the media data to be interleaved into the existing TCP connection.


When interleaving, the client-to-server SETUP command has the following format:

The changeover in the preceding example is in the transport description. First, the transport mechanisms have changed to show that the RTP delivery must be over TCP rather than UDP. Second, the addition of the interleaved option shows that the RTP data should be interleaved and use channel identifiers 0 and 1—0 will be used for the RTP data and 1 will be used for the RTCP messages. To confirm the transport setup, the server will respond with confirmation and a Session ID as before:

The RTP and RTCP data can now be transmitted over the existing RTSP TCP connection with the server using the 0 and 1 identifiers to represent the relevant channel.

This activity diagram illustrates a series of actions to transit from DISCONNECTED to CONNECTING, CONNECTED and PLAYING states.
It also reveals the flow chart of failing back to TCP-interleaved RTP transport. 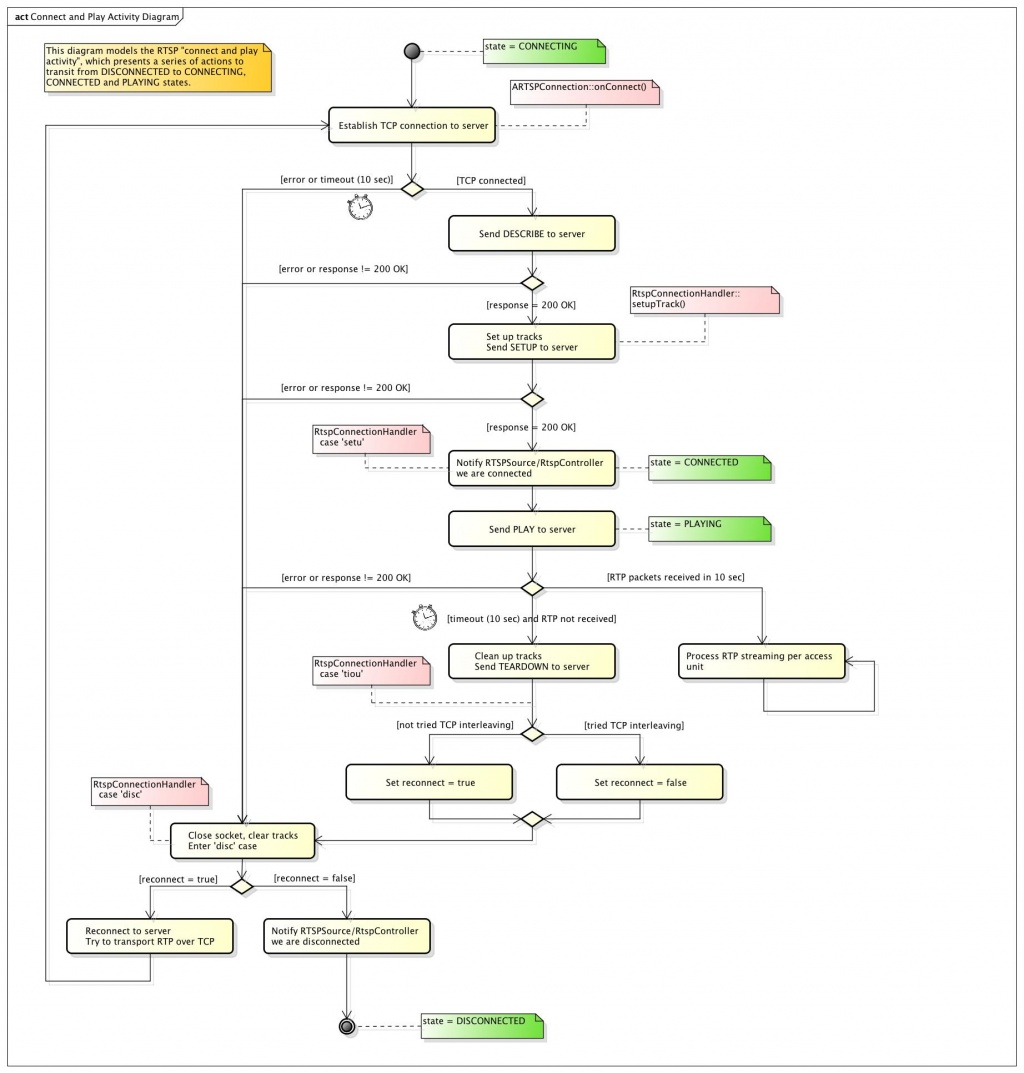 This diagram models the state machine of RTSPSource class. 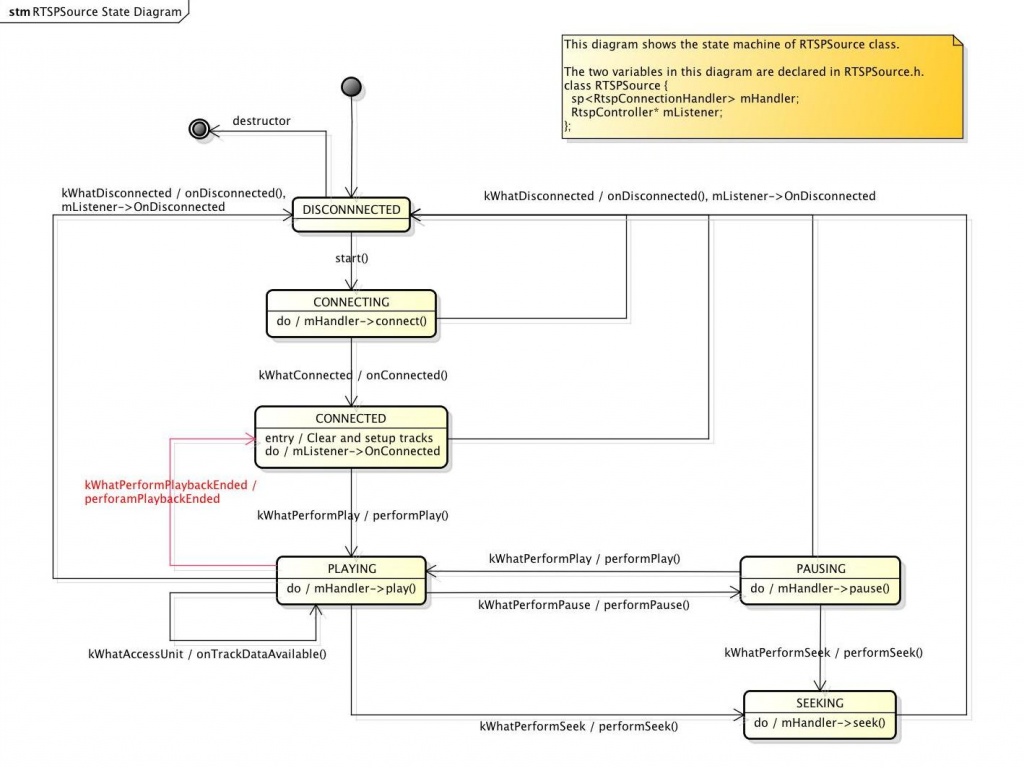 The major features, improvements and issues of our RTSP streaming are listed below: