Sync is a very useful feature, but has so far failed to achieve widespread adoption. We believe Sync to be an important piece of the Firefox experience, and our goal is to deliver a much more attractive product to support continued Firefox growth. We are tentatively targeting Firefox 20 as the GA for this new version of the service.

User Data covered by the feature

The implementation of the next generation Sync feature will be centered around Persona. The Identity team will work to define and deploy a special type of IdP, to which we'll refer as a "Preferred IdP" or PIdP for short. This IdP will support an auth protocol designed to prevent disclosure of the user's Persona passphrase to the server, as well as enabling non-browser clients to directly authenticate without a browser context. In addition to a secure authentication protocol, a PIdP will also expose an API to obtain a wrapped encryption key (known as the User Key, or UK). This key will be encrypted and decrypted on the client, using a key derived from the Persona passphrase. The User Key will not be exposed to consumers, but will be used by the Persona client to encrypt and decrypt a per-service encryption key (known as a Service Key or SK) on request.

Similar to Apps in the Cloud, the service client will obtain an assertion from the Firefox Account client, and use that to authenticate to the Token Server. A successful request to the Token Server will return an object containing all necessary data to make requests against the Identity-attached service, as described in the Token Server API docs.

The new version of the Sync Storage API uses the same request authentication model as Apps in the Cloud. Beyond that, it is a significantly refined version of the 1.1 API with a set of improvements outlined in the API docs. Sync clients will use a Service Key stored on the service itself, encrypted by the Persona client using the UK. The SK (or keys chained to it) will be used to encrypt outgoing records and decrypt incoming records, like the existing model.

A very simplified view of the changes between Sync 1.1 and Sync 2.0 is provided by these diagrams:

We can split this effort into four main areas:

Note that (2) is blocked on (1), and (4) depends on everything else to some extent. Development work can begin but not complete until those dependencies are met. 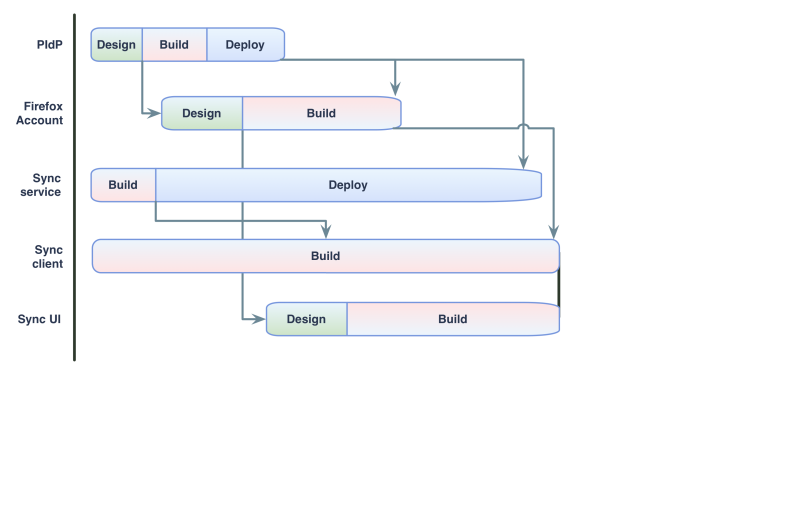 It might be helpful to think of achieving a Firefox account — that is, providing a PIdP and browser integration — as one project, and browser data synchronization as a separate project on top.

More details are in the technical plan.

Previous questions have been answered and archived archived