(formerly Parser: The Next Generation) 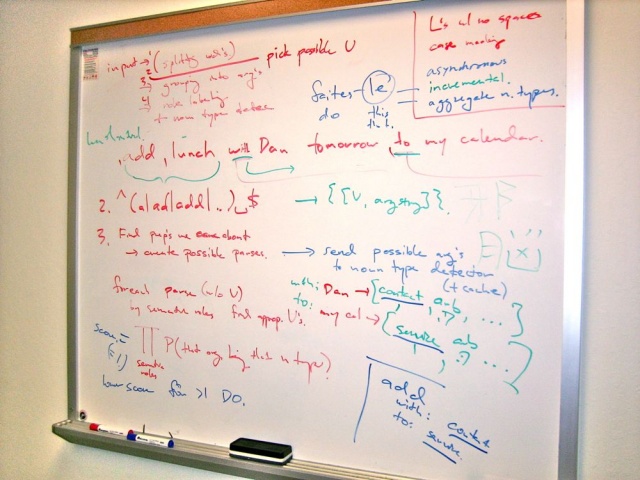 Parser 2 has shipped as part of Ubiquity 0.5. You can learn how to localize the parser (teach the parser the grammar of your language) in this tutorial.

Parser 2 files and language files are in the ubiquity/modules/parser/new directory.

each language will have:

EX: add lunch with Dan tomorrow to my calendar

Step 1 doesn't actually split the words up into an array, but it does insert whitespace and no-width whitespace between characters in the input to facilitate future parsing.

Japanese: split on common particles... in the future get feedback from user for this

Ubiq will cache a regexp for detection of substrings of verb names. For example: (a|ad|add|add-|...|add-to-calendar|g|go|...google...)

This step will return a set of (V,argString) pairs. (Note, this includes one pair where V=null and argString is the whole input.)

EX: for (null,'add lunch with Dan tomorrow to my calendar'), we get:

then move to the right of each argument (because English is head-initial... see parameter above) to get argument substrings:

for add lunch *with* Dan tomorrow *to* my calendar:

(Note: for words which are not incorporated into an oblique argument (aka "modifier argument"), they are pushed onto the DO list.)

Each language has a set of "anaphora" or "magic words", like the English ["this", "that", "it", "selection", "him", "her", "them"]. This step will search for any occurrences of these in the parses' arguments and make substituted alternatives, if there is a selection text.

> see blog post on argument normalization and its use cases

For languages with a normalizeArgument() method, this method is applied to each argument. If any normalized alternatives are returned, a copy of the parse is made with that suggestion. Prefixes and suffixes stripped off through argument normalization is put in the inactivePrefix and inactiveSuffix properties of the argument.

step 7: suggest verbs for parses without one

For parses which don't yet have verbs, Parser.suggestVerb() is used to suggest a new verb whose arguments match those which have been parsed.

A note on asynchronicity

In order to support asynchronous nountype detection, steps 8-10 of the parser are done asynchronously, taken out of the general Query._yieldingParse() flow and instead put into a series of callback functions, completeParse() and tryToCompleteParses().

First a list of dependencies between parses in Query._verbedParses and different argument strings is constructed. After each nountype detection is completed, tryToCompleteParses is called. If any parse has no more arguments to nountype-detect, completeParse() is called on those parses.

At the end of completeParse(), it checks to see if all parses have been completed and calls Parser.onResults() when done.

Nountypes that match everything (for example, noun_arb_text) should return a score < 1 so that parses with more specific nountype matches are suggested (see scoring below).

Each nountype suggestion in nounCache includes a suggestion for what the argument input may be. For example, "dan" could refer to the contact "Dan Benjamin" or the text "dan". Each combination of different suggestions for different arguments is constructed for each parse. Only nountypes in the nounCache which match the target nountype for that argument (based on that verb) are used.

For example, a certain parse has an object argument ("truck") and a goal argument ("tok"). "truck" has just one suggestion in the nounCache ("truck" as arbitrary text) but "tok" has two: "tok" as arbitrary text and "Tokyo" as a physical location. We then yield 2 ( = 1 * 2) parses with complete arguments for that base parse:

If the verb in this parse, however, only accepts one nountype in the goal—arbitrary text or location—only one of those parses will be allowed.

The scoring of individual parses includes factors which affect the score negatively and positively. For optimization reasons, all negative factors (having too many arguments per role, having to suggest the verb, missing arguments, etc.) are calculated in the scoreMultiplier early on in the derivation, and this scoreMultiplier is used in the additive calculation of positive factors.