The purpose of this meetup was to eliminate duplication of effort and focus limited resources on the highest priority community building needs as well as to shape our role to create a model for how Mozilla needs to be doing community building. 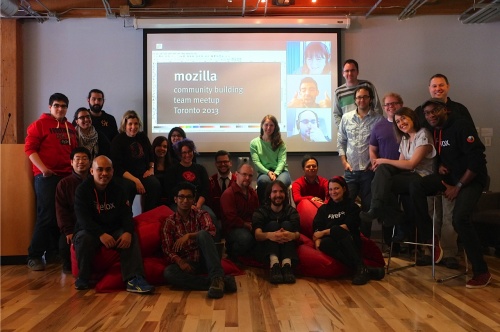 The meetup started with everyone introducing themselves and answering the question: "What advice would you give to a new Community Builder on their first day?". Notes from that are captured at:

There was then an overview of Community Building at Mozilla in 2013. The slides for that are at: 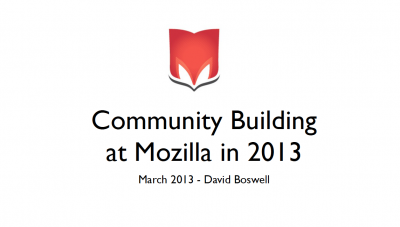 The rest of the sessions were focused on each of the community building pillars covered in the introduction. To make this summary easier to read, similar sessions are grouped together below although this isn't necessarily the order they happened at the meetup. There were also a number of smaller break-out groups and brown bags that covered topics, such as creating an Events Manager and being aware of cultural issues in a global project, that are not covered by the session summaries.

We discussed the current state of localizing the Get Involved page and how Mozilla Hispano's initial efforts with onboarding Spanish speaking potential volunteers from the ES version of the page could be used to support other local community builders. We also discussed where other useful information could be gathered from, such as how Recruiting manages its funnels, and how this can be packaged up into a resource over the Summer by the Community Building intern.

Members of the ReMo Council discussed what the Reps program was and how it could be leveraged by teams to do community building. There was also a discussion about current challenges that are being faced when regional community builders try to bring in people to functional areas of the project beyond the local community.

We started the discussion about systems and data by reviewing a collection of tools that are either under development or have been under consideration. The group then added their priorities to the list and saw where there were commons needs. The prioritized functionality list is at:

After discussion of general needs, we focused specifically on what the needs and requirements were around a volunteer management system and what the time frame could be for deploying one. The idea of having Working Groups that could focus on creating plans around specific topics, such as Systems and Data, came out of this discussion.

David Eaves lead a discussion on community metrics that included case studies of what the Fundraising, Engineering and Support teams are doing with data analysis. The discussion also covered how to have people in the organization respond to community metrics once dashboards have been created.

The group was presented with information about the tools and systems that currently exist within the People team to help support employees and there was an invitation to see how those tools may be useful for community building. For instance, could the onboarding tool cover information about how to volunteer for specific functional areas?

There was a video sprint where people were asked to create videos that could help people who want to learn about how they can bring in volunteers to their projects. This was also a pilot effort for the Capture Mozilla project to see if team meetups were good places to capture knowledge. The three videos that were created are: 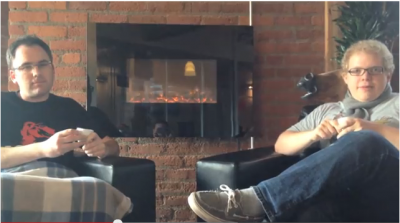 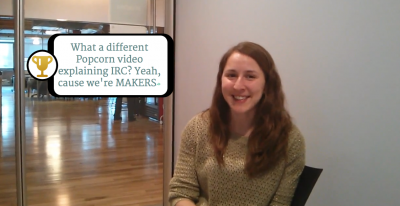 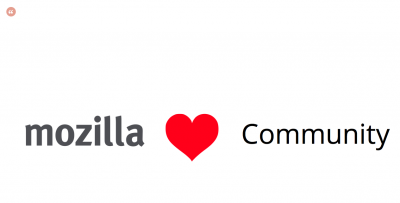 Dave Eaves lead a discussion around the Community Building workshops he created last year to gather feedback about what changes should be made to the content. We also discussed if people would be interested in delivering the workshops themselves to their teams and discussed how to make the workshops hackable and how to support people who wanted to deliver this content.

We summarized the recent effort to launch Webdev contributor badges and discussed what parts of this pilot effort could be reused by other teams that are interested in issuing badges. We also discussed how we could take this information and create a Recognition Guide as a resource to cover not just badges but any way contributors could be recognized.

There was a discussion about how we could learn about best practices with creating games that let people play in an open world vs. having a game that forces people to play along a prescribed path.

We wrapped up the meetup with a call to the group to see themselves as models for how we think Mozilla should be doing community building going forward. We also discussed how to present our thinking to the overall Mozilla project when the group has a proposal about some aspect of community building.

Find out more notes, links and other information on the etherpad for the meetup:

There was a live Vidyo stream of the event, but unfortunately we were unable to record it due to a Vidyo bug.