We have spoken to many of the individuals directly involved in the response as well as the teams working directly with the certificate management and add-on signing systems. We have a list of opportunities for improvement and next steps are to prioritize and find owners to drive some of these investigations and changes forward.

On May 4th, 2019 at midnight UTC, the intermediate certificate used as part of the add-on signing process expired. The result was that every add-on signed using this certificate could not be loaded into Firefox. For many of our users, the internet was broken and their experience was severely impacted. Approximately 40 to 50 percent of our users have add-ons. Eric Rescorla published a blog post shortly following the incident summarizing in more detail what happened.

Our users reported the issue on Twitter, Reddit and other social channels. We mobilized our incident response, tweeted to let our users know we were aware of the issue and worked on solutions for the problem. Approximately 6 hours post-incident we published a fix via a Normandy study to delay regular add-on signature update checks. Within 9 hours of the issue, we shipped a new certificate, also via Normandy, with an updated validity window. Dot releases for both Desktop, Fennec and ESR were released within 48 hrs and a number of follow-on fixes went out to support users on older versions of Firefox. Our last fix was deployed on May 24th. A timeline of remediations can be seen below. 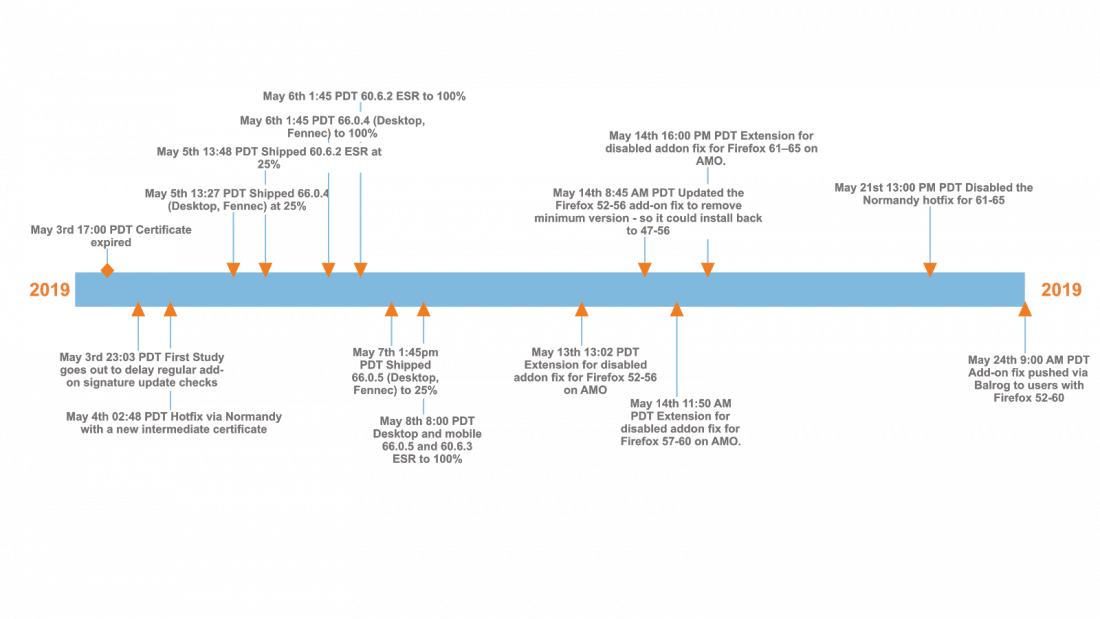 Hundreds of staff and volunteers came together to respond to the incident. We could not interview all of them but we did speak to over 30 individuals to understand how this happened, how we responded and what we can improve going forward.

This situation wasn’t as simple as “we let a certificate expire before it could be renewed”. We were aware of the expiry date when the certificate was issued 2 years ago. Peter Saint-Andre and Matthew Miller put together a more detailed technical report on the root cause. Next steps for helping protect us against this in the future involve a more detailed review of how we handle add-on security in general.

One of the most important aspects of a post mortem are the learnings and opportunities for improvement and discussion. The Firefox organization will be working through the following list of improvements and spinning up projects to investigate further and drive them forward.

Conclusion and Next Steps

In addition to distributing this document internally, we will be working on a public blog post talking about improvements we want to put in place so this doesn’t happen again. The Firefox leadership team will be tackling the opportunities for improvement and looking to spin up a number of projects in the coming weeks and months.