Wifi Direct is currently an opt-out feature on B2G. To enable Wifi Direct, you have to add 'ro.moz.wifi.p2p_supported' to your system/build.prop. However, there is still no gaia app to work with Wifi Direct. If you want to develop features on Wifi Direct, please refer to this gaia remote to see how to Wifi Direct APIs.

Flame has been verified capable of Wifi Direct. As for other configurations:

Wifi Direct is a peer-to-peer communication method based on Wifi technology. Two phones could connect to each other without the existence of access points. Wifi Direct is a pure software feature so it requires no hardware upgrade. The communication speed is as fast as regular Wifi speed so it's pretty appropriate to be used to transfer a large file.

As compared to another WiFi peer-to-peer technology, ad-hoc mode, Wifi Direct has some advantages over ad-host mode such as the security, the speed and the ease of use. However, Wifi Direct is difficult to build a complicated topology of network. The most common use case is only two phones connecting to each other. In this case, one phone will be a so-called "group owner" and the other will be "client". The participants in the network formed by Wifi Direct will be addressed in the following section.

There are two main files to implement the internal Wifi Direct machinery:

Other than the mentioned files, dom/wifi/StateMachine.jsm is a helper to build a Wifi Direct state machine; dom/wifi/DOMWifiP2pManager.jsm would sit in each window (may has multiple instances) to work with internal modules by message manager (ppmm/cpmm).

The relationship between DOM, WifiWorker.js and the Wifi Direct modules can be represented in the following figure: 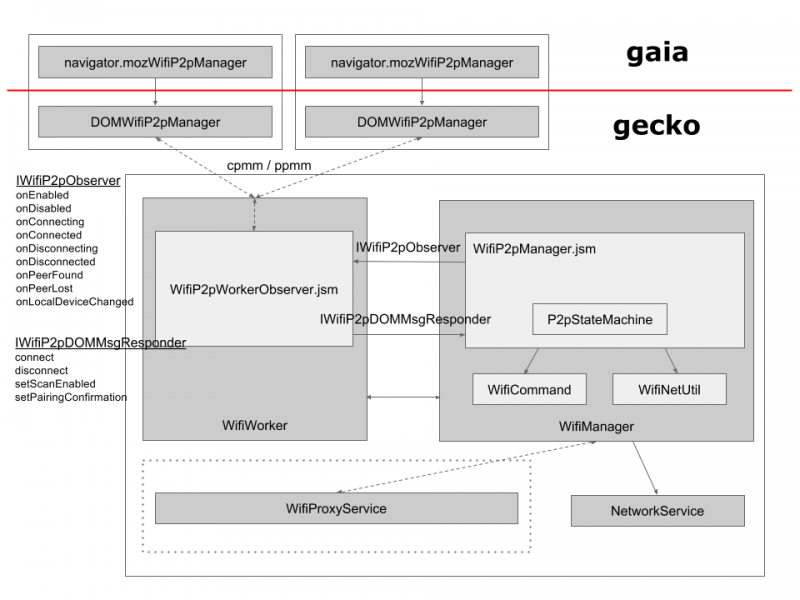 Note that there is no explicit dependency between WifiP2pManager and WifiP2pWorkerObserver. They are implicitly depending on each other through two implicit interfaces: IWifiP2pObserver and IWifiP2pDOMMsgResponder.