When a user logs in to a web site directly, that web site has the user's password available to it, and it can use this password as a source of entropy for a cryptographic key. Once a web site uses BrowserID, that goes away. With BrowserID key wrapping, we're bringing this feature back. We're providing a way for web sites to get access to a cryptographic key based on the user's login.

A web site wants to perform client-side encryption of user data. We propose an API where a site can take a cryptographic key, wrap it with BrowserID in a way that can be later unwrapped. Wrapping should be keyed to a single email address, and should be as stable as possible: if the user changes password, unwrapping should continue to work. We accept that, if the user loses their BrowserID password altogether, the keys wrapped prior to the password reset will be lost.

BrowserID does not store any data on behalf of the web site. Instead, it provides a wrapping/unwrapping API. The web site is expected to generate a key for the user, wrap it via BrowserID, and store the wrapped key on its own servers.

With the new BrowserID API that keeps track of whether user is logged in, we don't need to feed in the assertion anymore. But we do feed in the identity, in case there's a disconnect.

We use the XHR approach, with one callback for success and one for failure.

The audience of the assertion must match the origin of the content, and a wrapped key can only be unwrapped by the same origin that wrapped it.

Since we don't want web sites to have to deal with their own key-generation process when we already have to solve that, we also introduce:

If successful, successCB is called as follows:

Before this is exposed as a content API, BrowserID exposes secret wrapping as an internal API:

In this internal API, the origin has to be explicitly specified.

We don't ever do raw encryption. We perform encryption-then-MAC. We do this by encrypting the plaintext, then HMACing the ciphertext. The decryption process first checks the HMAC, and decrypts only if it is valid. In the following description, every time we talk about a single key, we really mean two keys: one for encryption, and one for HMACing. We use AES in CBC mode for encryption, and HMAC-SHA256 for MACs.

Wrapping a key means encrypting (and HMACing) a data structure that contains the key and some optional tags. We denote this

BrowserID generates a new key for each email address it verifies. We call this the user key UK. BrowserID wraps UK with a password-key (PWK) tagged keytype=user. PWK is derived from the user's password using PBDKF2. When the user changes their password, UK is unwrapped and rewrapped appropriately with a new PWK'. If the user loses their password completely, in the current specification, UK is unrecoverable and may as well be deleted. 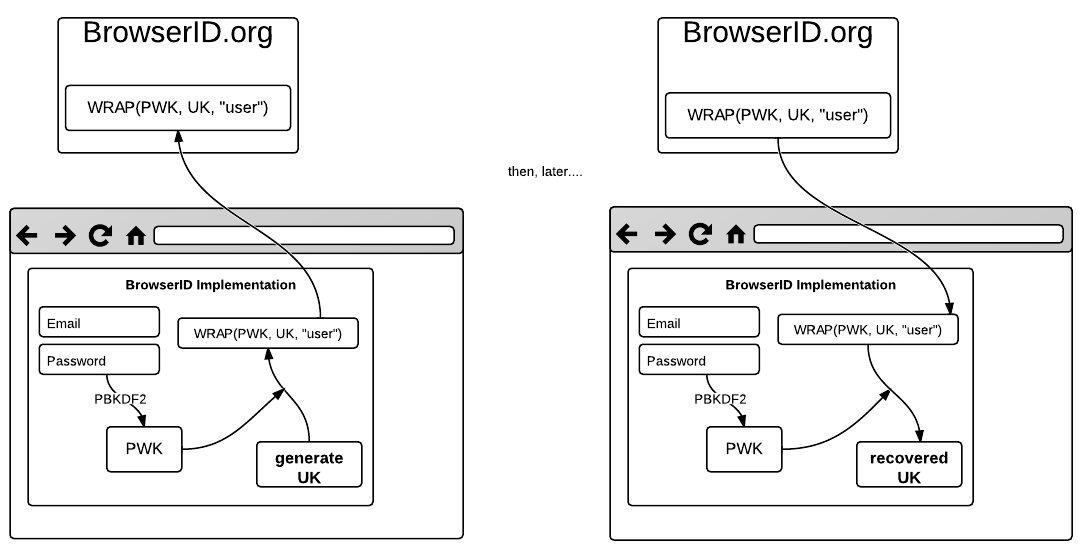 What this Means for BrowserID 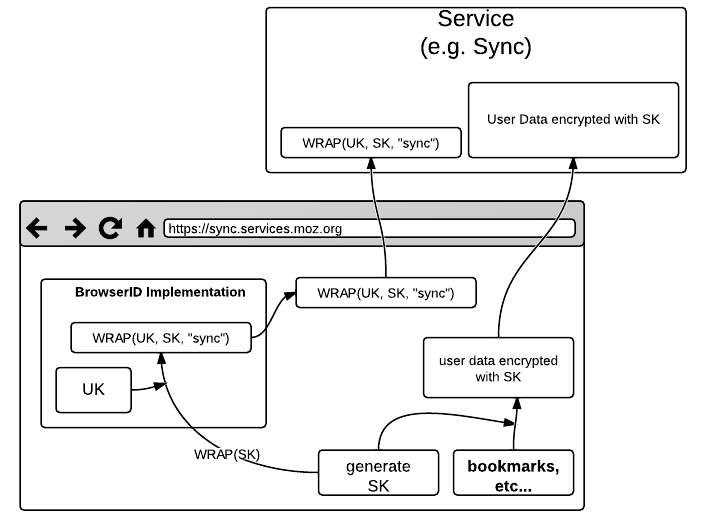 For unwrapping, the reverse operation occurs. BrowserID checks that the unwrapper is the same origin as the wrapper: 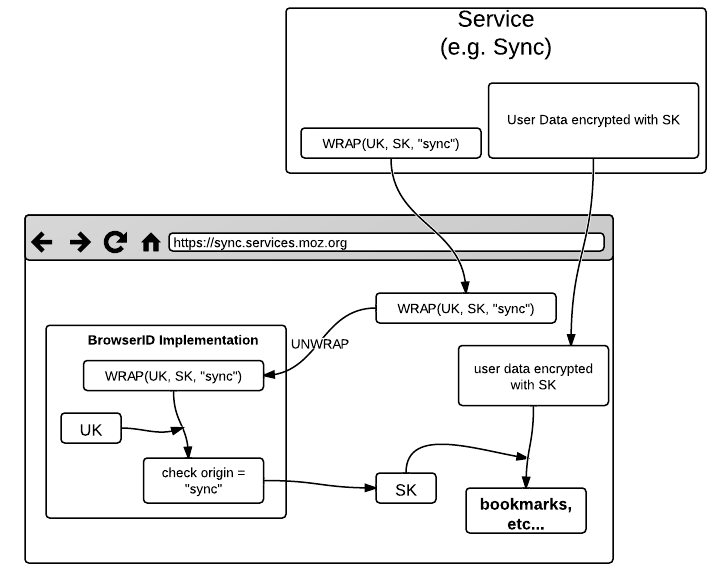 What this Means for the Service

BrowserID is providing key wrapping and unwrapping, but as far as the service is concerned, BrowserID does not provide key storage. The service is expected to wrap any cryptographic material it needs in the client, using the BrowserID wrapping API, and then store the wrapped data (usually just a single key) on its own servers. For example, in the case of Firefox Sync, the user's sync key gets wrapped by BrowserID, and this wrapped key is then stored on the Sync servers themselves.

It's worth noting that the data stored on the service (e.g. Sync) is not vulnerable to low-entropy passwords, because it is encrypted with a user-key. However, the wrapped user key stored on the BrowserID service may be vulnerable if the user's password is not sufficiently secure. Finding a good, usable way to obtain a secure password will be very useful.

Currently, if the user loses their password and must reset it, the user key UK might as well be thrown away, and data encrypted against that key is thus lost for good. In future work, we may evaluate a key escrow mechanism by which the key can be recovered, somehow. This is considered out of scope for now.

If we do introduce key escrow, we would likely augment the API to explicitly allow escrow for certain keys, and not others: