As of Bugzilla 4.0, most of Bugzilla's major usability problems will have been addressed. There are still some rough edges, but for the most part, we've improved usability to the point where it's much less of a problem than it used to be, and we don't have to worry about it as much.

Now it's time to make Bugzilla look nice. However, we are not experts in this area. So, we are turning to you.

This is the "Make Bugzilla Pretty Contest". We are looking for designers to submit images of redesigned Bugzilla pages. If we choose your design, you will get:

Most importantly, you will be able to say that you were the person or company that made Bugzilla pretty--a career-changing (and very marketable) accomplishment, at the least.

To enter, all you have to do is submit an image that is a redesign of this exact bug view page:

There is also an annotated version of the image that shows which pieces are optional or not shown to all users.

You don't need to submit a working HTML page, and in fact we don't want one--we just want an image.

To make your submission, just create a new sub-section of the "Entries" section below. You can see a sample entry there. If you have any trouble, you can also just email your submission to mkanat@bugzilla.org.

You may want to start with something simpler than the bug view page, so you can first submit a redesign of the front page, if you want. The front page looks like: 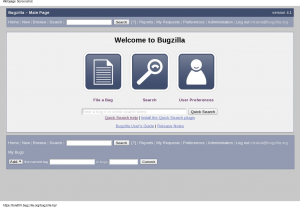 Here's a little description of what I did, some of my thoughts about this design, and who I am.

From Everything Solved, Inc. 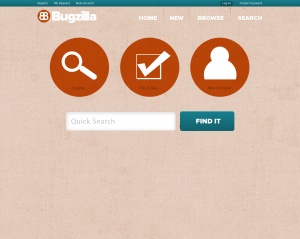 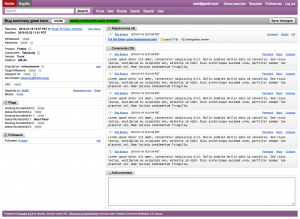 N.b. this was made quite a while ago and is by no means a finished entry (the entry do not comply to the rules), but I chose to add it anyway knowing I probably not finish it in the time frame due to lack of time. I hope it shows parts of the essence of my idea. Nuss 15:25, 27 January 2011 (PST) 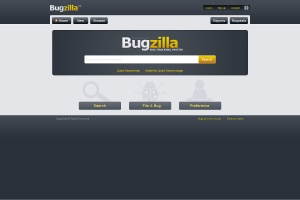 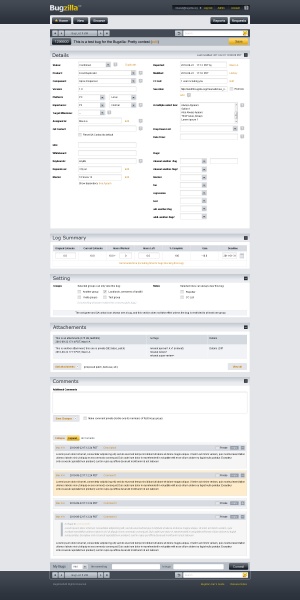 Worked on it since late November. Majority of the design work is in place, but fine details aren't quite there yet. Enhancements can be made as you go along. If you have any questions, I can be contacted through here - http://lduong.com/contact/ 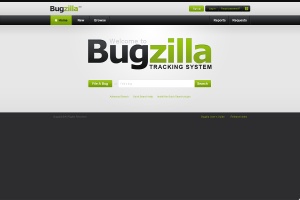 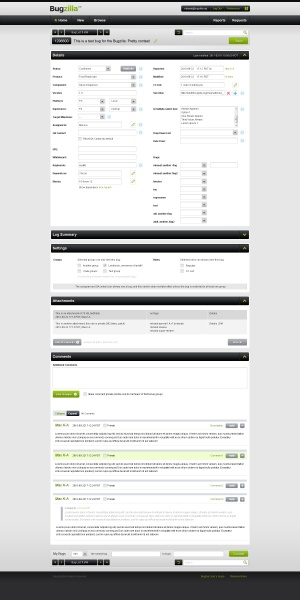 Here's another design with much emphasis on details. Forms are the same from previous submission, but added some visual cues to improve recognition. This layout is also designed to adapt whatever brand you may have.

Designers Comments: There isn't too much of a difference between the options provided, just a little rearranging and some fun while at it. Personally, for the bug page, my most preferred design is Bz_Bug3.png as I believe it puts most of the necessary input right in front of the user in a meaningful way and the screen does not look so busy when Advanced fields are hidden. I however had some concerns over future bugzilla iterations and the flexibility of this layout when new fields are added. 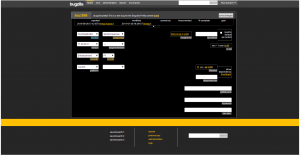 Inspired by the design elements incorporated by JWilde and Faaborg and facebook of course, I've added the design above. It's incomplete as the comments, flags, attachments etc, will either be the similar to what I've previously submitted or would be a variation on the what JWilde submitted, possibly something using jQuery. 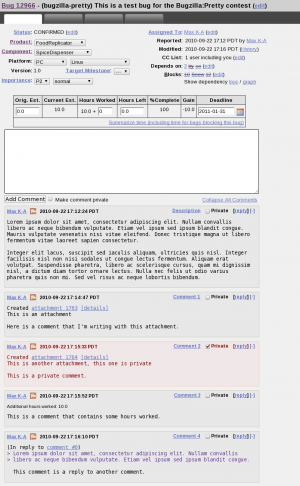 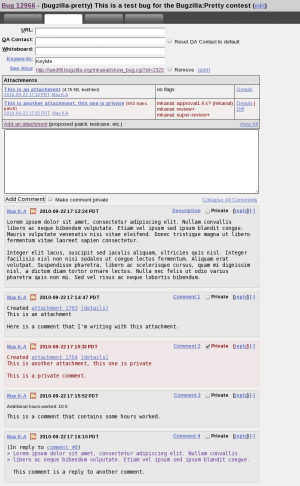 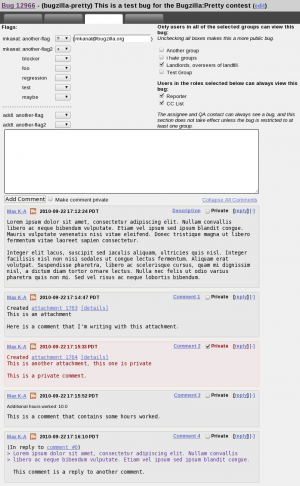 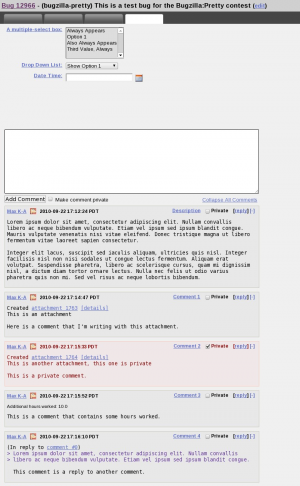 The idea is to make a block with the most important options, followed by the comments. In case javascript is available all other blocks of information can be show in a series of tabs, otherwise they simple move to the bottom of the page. A side-thought while working on this was to add a button to collapse all but the topmost comment or even add a preference to do so by default. 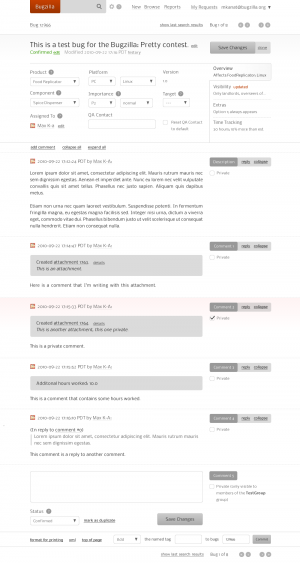 This design's goals are pretty simple: to push lots of information up to the top of the page and to be lightweight.

The fields at the top of the page are compressed using a Drupal-style tabbed container. The text below the title of each tab provides a summary of the values of the fields in the tab. The sections not rendered in the mockup above are as follows:

The design is intended to be both visually lightweight and, after implementation, lightweight in terms of page size. The design should be easily implementable using CSS3's gradients, border-radius, text-shadow, and box-shadow for the special-effects. It will probably still look decent in browsers where these features aren't available.

The mockup is typeset in Nobile, which is available for CSS @font-face embedding. While I am fond of that typeface, Verdana can be easily substituted to cut down on loading time.

Implementation of the design entails a few background images for the faint texture on the search box and gradient backgrounds, but it can still hold together with plain CSS3 gradients instead. The gear, search, and down-triangle icons--which can't easily be reproduced with special characters in HTML can be easily sprited into a single, small image.

If you have any questions about the design, feel free to contact me. My email address is in the bottom right corners of the design note images below. 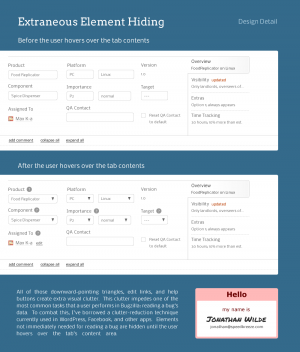 This note shows how to simplify the design and reduce clutter even more. 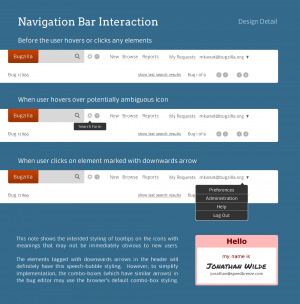 This note shows the interactive aspects of interaction with the navigation bar.

The theme [bracket] uses crisp, stark lines to organize content. To help quickly convey information, color is used only for the properties that have a value (in transition, positive, negative). Also, to help people quickly parse the page to answer questions, properties are spatially organized based on some of the core journalistic questions (what / who / when / how). Visually ones sees a series of colorful blocks link together, as people collaborate over time. The comment thread becomes sort of a software development DNA. The design focuses on data over metadata, and maintains a feeling of minimalism while still conveying a massive amount of information.

Example of how this design works with HTML email

Hi I haven't finished yet and am past the deadline. Here is my unfinished design anyway. Hope I posted this correctly :)

standio allows for any user to customise the layout of any web page to their personal taste, save changes for future use or load a previously saved layouts. For further information goto: stand.io

Created a mock-up for this competition using Visual Studio as it serves as a good example of what we are trying to achieve.

My idea was to eliminate the clutter in the old bug page; a bit too much scrolling. I accomplished this by categorizing all of the sections, and putting them into an easy to use, clean interface.

In the comment section, the user would simply click on the "Reply" button, and a message input bubble would appear. From here the user can type his or her reply and click submit to post it.

This isn't done and I'm a day late, but whatever. I'll probably end up making this into a 3rd party theme if I get time anyway...

About: This is a bastard child of twitter, github, and mozilla.com designs. I did the mockup in html and will likely post it somewhere so people can play with the interactions. The only images are the mozilla logo and the gravatar images, everything else is html and css (including the comment arrow)

Things that I didn't finish: 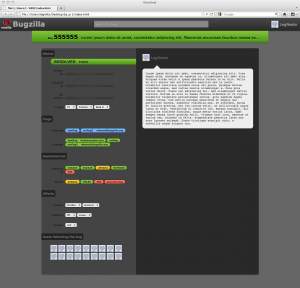