This page is to serve as a guide for interested researchers (primarily academic researchers) who would like to experiment with Firefox for research purposes. Such experiments might include:

Or something entirely different. Be creative.

The first step will almost certainly be to build the browser locally. Firefox has a well maintained mechanism for obtaining the dependencies needed to build it, even on Windows. Follow the Developer guide at MDN to build Firefox for the first time locally.

Once you've built it, use ./mach run to start the browser and take it for a spin.

You can add --headless (after 'test') to run them without launching the browser window. This is useful when working on a remote server. Note however that while --headless works most of the time, if a test fails to run, it is worth re-running it without --headless in a GUI environment.

gtests are run differently, for example ./mach gtest "*ReducePrecision_*" to run tests with 'ReducePrecision_' in their name (which would be tests like these).

Building and Testing in Mozilla Infrastructure

Note that all try runs are public, and presently Mozilla does not have a mechanism to do private builds or test runs.

The TryServer is a way to submit a one or more patches and have them built on multiple Operating Systems, run tests, and download builds and logs. Because the entire build system is specified in the mozilla-central tree as configuration files it is possible to write a patch that changes the compiler used (either to a different version, or actually patching the compiler), have the tryserver check out the compiler source from a remote repository, build the compiler, and then use the compiler to build Firefox. All in the cloud. https://wiki.mozilla.org/ReleaseEngineering/TryServer has more information about the TryServer, but we will aim to have a functional quickstart tutorial in this document.

Before submitting to try, you will need to contact SURF at the email surf@mozilla.com and provide us with some information about who you are and roughly what type of research you are doing. We will treat this as privileged information and not share it outside the SURF initiative, except with other Mozilla engineers to help you debug or diagnose issues. (Note above; however, that try runs including the patches, builds, and logs are public.)

Once we've had a conversation, we will help you through the process of getting Level 1 commit access, which will give you access to try. This process is documented at https://www.mozilla.org/en-US/about/governance/policies/commit/

The TryServer represents a significant cost for Mozilla - especially for special Operating Systems. We expect that you will be judicious about your use of try. In particular:

A good rule of thumb is to get thing working with linux64 debug builds (running the full unit test suite is generally fine) and after that works; move on to building and running debug+optimized builds and unit tests on OSX and Windows. Until you are ready to measure performance, we ask you omit Talos jobs. Unless your research is specifically related to Android (and we would request you tell us that ahead of time) - we ask you not to run Android jobs.

Let's get the preliminaries out of the way:

After that there are multiple ways to push to try; but the two most common are:

Fuzzy is the currently supported and encouraged method for pushing to try.

Fuzzy allows you to very selectively choose what tasks to run. Its documentation is located here. It will automatically figure out dependencies; so if you choose to only run linux64-mochitests, it will schedule the needed linux64 build job as well.

Once you have pushed using ./mach try fuzzy once; ./mach try again will submit the configuration of the last push. Fuzzy has lots more additional options.

This try syntax is deprecated; but still commonly used for its terse-ness.

There are a couple of other flags that are commonly used:

Here's a quick overview of the most commonly used features. 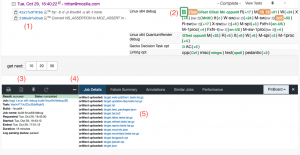 Here's what the red numbers mean:

Adding stuff to a Try Run, or re-running jobs

If you have an existing try run that you want to add jobs to (for example additional build jobs, or to re-run tests) this can be done from the treeherder web interface without needing to send in a new try job. The option to do this is behind the downward-facing arrow, at the top of the treeherder UI on the left-hand side, next to 'View Tests' and the pin icon.

For example, if you want to see if a test always fails, or only some of the time, you can re-trigger the test on an existing job, rather than submit a whole new try push that will perform a build step also. To retrigger a job, select it in the UI (so its details show up in the bottom pane) and press the 'r' key. It's a shortcut. Pressing the '?' key will show you the shortcut list.

The only caveat to this method is that it can be easy to add tests that are not typically run in a normal try run and may currently be failing in general - independent of your patchset. So keep that in mind if you get unexpected failures.

How do I modify the compiler used to build Firefox?

There's two answers to this question.

Locally: Inside your mozconfig, you can set the following like export FOO="bar"

Less commonly you may need to set

You may also need to set:

In Try: In try, you'll need to build your compiler and then use it. I'm going to assume you're building clang and working on linux64.

Here's a quick tour of where things are first though. The linux64 builds are defined in this file. Look for 'linux64/debug'. Some important things to note are mozconfig-variant and fetches. You match the mozconfig-variant with the corresponding file in this directory. Observe that the debug mozconfig pulls in additional mozconfigs. But modifying this mozconfig will modify the linux64 debug build.

fetches->toolchain will match up with the keywords defined in the toolchain definitions. So if we're looking for 'linux64-clang' we can search for it and see that while there is nothing defining 'linux64-clang' and a key (it would end in a : (colon)) - there is something saying toolchain-alias: linux64-clang. If we follow that, we can see at time of writing, it is defined as linux64-clang-9. (This link is a permalink to an old file, it may be different when you read this.)

Let's figure out how we build this toolchain. We want to look at build-clang.sh, which receives the argument build/build-clang/clang-linux64.json. It fetches the clang source using a keyword defined as clang-9 (under fetches->fetch) and this compiler is itself built using the toolchains linux64-binutils and linux64-gcc-7. (We could follow binutils and gcc-7 to find where they come from also, but we won't do that in this tutorial.)

First let's match clang-9 to the source code. We do that by searching for clang-9 in the toolchain's fetch file. We see the repository it comes from and the git revision we check out.

Then we can find build-clang.sh - it looks like most of the heavy lifting is done by a script called build-clang.py. We can also find clang-linux64.json. Of special note, is that the json file specifies where to find the compiler to compile clang, as well as patches to apply to clang before compiling it. (It might be simpler for you to point the source code fetch to your own repo, rather than adding patches in the json file though.)

Modifying components of those steps is how you'd customize the compiler used to build Firefox.

You may also need to set

ac_add_options --disable-warnings-as-errors - if your compiler produces new warnings, we may treat them as errors and abort. This will stop that.

How do I add logging to my code to figure out what is going on?

With MOZ_LOG. nsRFPService.cpp has many examples of it being used. Here's some notes: