<< Back to Calendar User Documentation

To use Sunbird, you'll need one of the following operating systems:

You can download either the Latest Stable Release or the Latest Nightly Build. The latest nightly build has more features than the latest stable release but might have severe bugs that can cause data loss or crash your application.

Don't use the nightly builds with production data as data loss and other scary things can occur. If you do not want to risk any data loss use the latest stable release.

For Linux users (correct for Ubuntu and variants):

First, try getting a supported version via your distribution's program/package management system. This will be very quick and easy, but the version delivered may be slightly behind the release curve. If you need the latest version, download the .tar.gz file from the Sunbird page to your desktop, and go though the following -

Open a terminal window and type the following lines -
sudo bash
cp /home/username/Desktop/sunbird-0.7.en-US.linux-i686.tar.gz /usr/lib
cd /usr/lib
This changes us into the /usr/lib directory

tar -xvf sunbird-0.7.en-US.linux-i686.tar.gz
This extract the Sunbird files into a new folder in the /usr/lib directory

gedit /usr/bin/sunbird.sh
Now we're placing a file in /usr/bin/ that tells the OS how to start sunbird Place the following text into the new document -

Save and close the new document
chmod +x /usr/bin/sunbird.sh
this changes our sunbird.sh file to an executable

gedit /usr/share/applications/sunbird.desktop
Now we're creating the icon in your Applications menu Place the following text in the new file 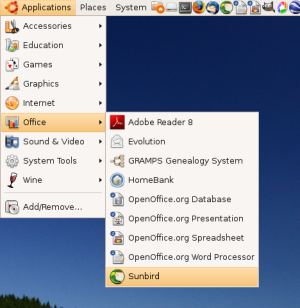 Now you can find Sunbird in the main menu. Go to Applications > Office > Sunbird. Launch it and accept the licence agreement

For those of us who tried and managed to fail at the above well done tutorial, you may use Synaptic Package Manager in Ubuntu.

System > Administration > Synaptic Package Manager Type sunbird in the search area. Click on sunbird package and "mark for installation". Popup to confirm "mark". Click on "Apply", another popup to make sure you want to make the changes. After SPM does its' thing, Sunbird will be under: Applications > Office > Sunbird