This is a proposal to create a framework on FirefoxOS to support apps that wish to synchronize data with a remote server. The framework itself would not provide a means of performing sync; it would not be a general-purpose "sync engine". Rather, it would permit apps to request to be awakened in the background to sync data periodically. When conditions were suitable (e.g., wifi were available, system load were low), apps would be awakened in turn and given an opportunity to sync. An app awakened for background sync should be given some protection by the system, such as a better OOM-kill score, to increase the likelihood that it would complete successfully.

The precise meaning of "sync" could vary from app to app. It could be simple remote backup, or it could be a full transactional two-way sync with conflict resolution, de-duplication, etc.

Several proposed standards and work in progress on FirefoxOS would support this system, in particular: 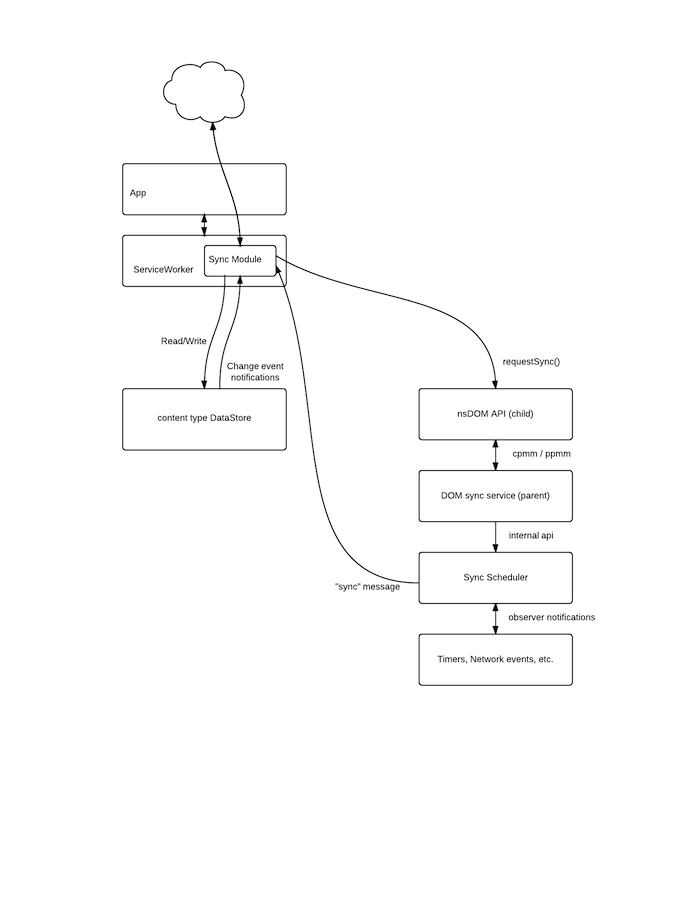 1. The App is installed with permission to read/write data type T. It wants to sync the T DataStore with a remote service. So its ServiceWorker sends a requestSync message, specifying the duration of the interval between sync requests.

2. The App also wants to watch T for changes, so its ServiceWorker registers a listener with the DataStore, asking to be notified on any changes. (See one-time sync below.)

3. Some time in the future, the Scheduler perceives that it is time for the App to sync. It enqueues the App for the next available sync opportunity (e.g., when the network is available).

4. When it is a good time to sync, the Scheduler sends a sync message to the App's ServiceWorker. This awakens the worker, but does not display the app. The app can now pull and push. (The app is responsible for the sync logic.)

1. Some other App modifies the data in DataStore T. The App's ServiceWorker receives a change notification (see 2 above).

2. The notification wakes the App up in the background.

5. The Scheduler receives the sync request. At the next opportunity, it wakes the App with a sync message, and the App syncs the changed data.

It is quite likely that the App in question would be modifying the DataStore at some time, and therefore trigger a change event. It might simply ignore this. However, it could still use a one-time requestSync to allow the Scheduler to decide whether conditions were appropriate for sync. This might be useful in cases where the App was unaware of network status or other relevant parameters (e.g., wifi availability). (More on these below.)

Because, apart from the activities of the Scheduler and attached app launcher, the System App is unaware of what data stores are being synced by what apps, configuration of sync and specification of suitable conditions for syncing must be managed in an App's own settings. It is possible that the System Settings could also aggregate a list of apps that have participated in sync by calling requestSync at least once.

The user ought to have some way to specify the right conditions for background sync for each app. Some important conditions might be:

The Scheduler is an alarm service that will cause apps to wake up by sending them a synchronization event message. There are two types of requestSync messages the Scheduler should expect, repeating and non-repeating.

If an app is uninstalled, the Scheduler must know to forget about it. Likewise, it must be removed from any system Settings lists.

The Scheduler's primary function is to send a synchronization event message to an App to wake it up so that it will know to being syncing (however the App thinks of syncing; the Schedule does not care). The Scheduler must respect the user's configuration preferences for awakening an app. In addition, an awakened app should have some additional assurances: For instance, it should be safer from OOM reaping than other backgrounded apps.