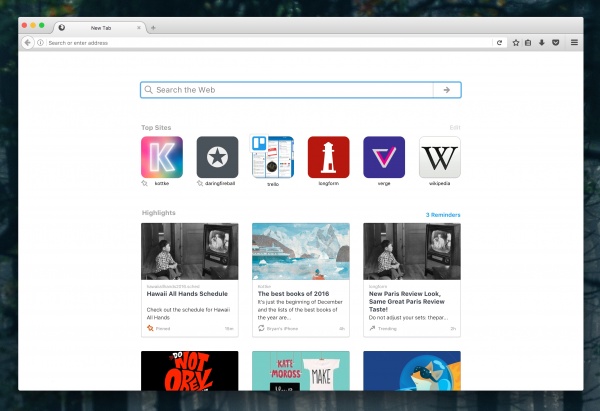 Activity Stream is a Firefox about:newtab and about:home replacement that aims to help users return quickly and easily to contextually relevant stuff on the web. It is currently implemented as an Add-on SDK/Jetpack add-on, and has been running as a TestPilot experiment for some months.

Activity Stream has been developed using a series of A/B test based experiments, both on an opt-in Test Pilot and an opt-out production Shield audience. We’ve been conducting qualitative research to inform product decisions; this has included testing prototypes and builds in user testing sessions, eye tracking, and diary studies. Our methodology is to continue optimizing the user experience along the user engagement and user retention dimensions. The about:newtab and about:home pages that land in Firefox will be measurably more engaging than the existing experience.

What's in this first release?

In this first release in Firefox we’re focused on replacing the Firefox home page (about:home) and new tab (about:newtab) with a single, consistent experience to make it easy to access your most visited sites and highlights from your recent browsing.

When is it shipping?

Why are we shipping this?

We think it's a great experience that makes Firefox the best place to easily get back to your favorite places on the web. We started the Activity Stream project with a much broader scope, but realized pretty quickly that focusing our efforts on the new tab and home page were the areas where we could most easily help users and make the largest impact. That's why we're shipping that experience first. We believe the testing and lessons learned in Test Pilot, SHIELD, and through qualitative research have helped us build a product experience that will work well for most people.

We feel confident moving into this next stage because we've seen good, stable retention and engagement in Test Pilot. In the SHIELD Study that we ran with users in release we saw high marks on the overall Firefox experience (4.5 stars), and improved 14 day engagement over the existing Tiles experience (fewer URL bar only interactions). The qualitative research that we are consistently doing has given us great insight into our users' different expectations and has informed many of the changes (particularly around customization) that will be in the product before release.

We're not done learning though. The SHIELD study also helped us discover that our Top Sites weren't working as well as Tiles for a lot of people, and so we've made changes (which we will also test). We will continue learning, changing, and growing this feature and believe that the best way for us to continue building this is by learning from our users in release.

Will I still be able to have a custom home page?

What’s happening to the snippets on about:home?

We’re integrating them into the Activity Stream powered home/new tab. We’re still nailing down the exact rules for how they will behave, but you can see the proposal here.

What about the buttons that were on about:home like Session Restore?

We are working on bringing those over. Session Restore will definitely be included.

Will there be differences between what’s in Test Pilot and what will be shipping Firefox?

Yes, there will be:

We have been focused on building a solid default experience while in Test Pilot, but we know that our users have different preferences for what shows up on their home page. We’re going to have some nice customization features before release. You’ll be able to customize your top sites and choose which sections and content show up on your home page.

We added a share button (shareplane remix) as part of the Activity Stream test in Test Pilot. We received good feedback, and we found it to be really useful. We believe this is an important feature for Firefox, but it won’t be included with this first Activity Stream release. We expect that this feature will be included in a later release as part of Photon.

Performance was something we had to balance carefully while in Test Pilot against the product features we were testing. Many times performance suffered as we figured out that balance. We are committed to the Activity Stream home page/new tab having the same performance properties as the existing pages: smokin’ fast.

The Test Pilot version was only available in English. We’ll be supporting the same set of languages as Firefox in release.

We want this new experience to great for all of our users. We’re working on improving the accessibility of the experience. Our intention is for it to be keyboard accessible, semantically meaningful, and easy to read.

What happened to the library (bookmarks, history, downloads manager) replacement?

It won’t be in this first release. We’re currently working on testing some prototypes of this new experience. More info on this coming soon.

Is this going to be a system (Go Faster) add-on?

Yes it will be. This will allow us to do releases outside the standard train schedule and move really quickly. We’d like to do releases every 2 weeks. We also have a really great A/B testing framework built into Activity Stream so that we can make sure new features are working well for a subset of our release users before rolling them out to everyone.

Is it going to continue be an SDK Add-on?

Probably not. We know there are issues with SDK add-ons and are working with folks on the Firefox team to figure out the best way to proceed.

Are those Highlights actually ads?

No they aren’t. Although it turns out that anything with a picture and some text will appear to be an ad to some people some of the time. We don’t have any plans to use that space for advertising now or in the future. The Activity Stream home page is focused on you and your stuff.

Will there be recommendations for new pages and sites to visit in my Highlights?

Not yet. We did some testing around recommendations in Test Pilot, and had mixed results. It was clear that we needed additional personalization for them to be useful. We believe this is one of those features that will be much easier to build in front of our release audience.

Will my browsing data be sent to Mozilla?

No it won't. We used a remote service during testing to provide additional metadata (images, summaries, etc), but that is being replaced with our own metadata parser that will run within Firefox for the release version.

Where can I learn more?

Here are some interesting links if you're interested in diving into the details: