Analogous to the DOM inspector or Firebug inspector, this is a mechanism to get a fast drill-down into an HTML page with associated properties for the selected element. 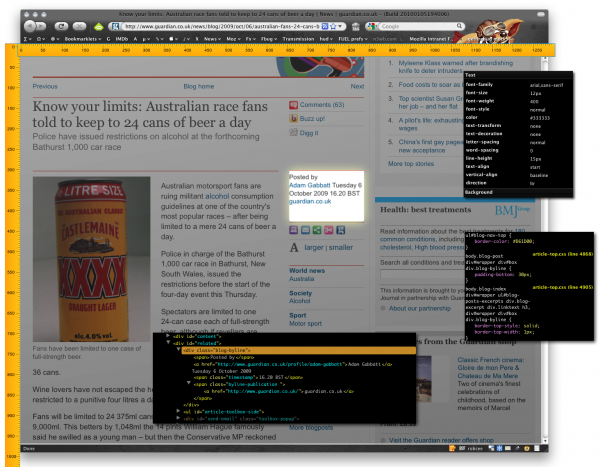 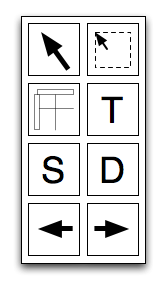 We'll need a place to control the various functions of the Inspector. A toolbar palette suggested itself to me based on the look of the rest of the UI. The palette contains controls for (in order, from top left to right):

The palette also provides a space to add features without affecting base Firefox UI. These buttons will all require icons.

Quick keyboard shortcuts should be available for each function.

I will say — in general — that I'm not a big fan of icons for operations that aren't immediately obvious. E.g. Firebug's switch from an "Inspect" text labeled button to their current icon made the UI more confusing. Even Microsoft are moving away from icon-based UIs with their latest efforts (Windows 7, Office 2010, Win7 Mobile). Very few icons are universal, and text usually makes the UI clearer — especially in niche applications.

This is making me reconsider the toolpalette above. It might make more sense to drop a toolbar onto the Tree panel and used text-buttons. The extra space in the toolbar would also act as a drag-target en lieu of a title bar.

Inspect an element in a webpage

Right click on an element, choose Inspect from the context menu and have the element displayed in the treeview, style and DOM panels. The node will be highlighted with the Highlighter panel. The highlighter panel can display positioning information about the element as well as provide rulers and guides to aid in understanding the layout.

Open the Inspector, view the document in the tree panel, scrolling and expanding as needed. Selected nodes update the style and DOM panels as well as position the highlighter in the webpage. The tree panel shows a hierarchical view of the webpage and allows Jimbo to expand and collapse nodes to see the structure of the web page. This is a different kind of view than view source and it will update as the page changes due to DOM manipulation.

Open the inspector and select an element. Double click to edit attributes in a node, styles in the style panel or object properties in the DOM panel. Edited attributes and style properties should be highlighted to stand out.

It should also be possible to dump a log of the modified properties and rules that should make it convenient for a developer to reintegrate modifications into their website's files for deployment.

It should be possible for a user to position and size individual inspector components on their screen. Closing individual panels and panel positions and sizes should be saved when reopened.

The inspector should present layout information about a node in the highlighter itself. Tweaking position in the style panel or the DOM should update the position of the element on the fly.

Rulers and Guides for Inspecting Layout

The highlighter will have the ability to display Rulers and Guides on the webpage which can then show the various offsets and paddings associated with an inspected node.

Maybe a user would like to measure the distance between two nodes and understand why they spaced the way they are. Using the inspector with guides, they should be able to see all of the necessary offsets and paddings that make up their placement.

It should be possible to inspect an element in a web-page with interesting behavior. Sometimes a webpage or application can vary the DOM tree by adding subnodes or making a node hidden or visible when a user does something (mouseover/hover, clicking, etc). These behaviors should be tracked and the inspector should present this information to the user as it happens. Inspecting a node should also display pseudo-classes (e.g., :hover, :active, :focus) and their rules if associated.

For example, say you have a webpage with some nodes that are displayed when a user mouses over a particular control on that page. Our user Georgina wants to know what is causing that DOM node to appear, so she highlights the control and inspects its attributes. It's likely this control will have an event associated with it, and the events panel will list that there is a mouseover event and potentially have a link to the JS source code (via view-source:) that uses it.

The inspector keeps track of a number of nodes visited. These can be retraced through the Next/Previous buttons on the inspector's HTML panel's toolbar. In addition, these should set the Firebug Command Line API variables $0, $1, etc. for easy access in the Console.

Someone using the Inspector could, for example, inspect a series of nodes related to a particular control on a webpage. Then, in the console, they could programmatically access them using the $0, $1 mnemonics and then manipulate the DOM objects, print their properties or trigger the inspector.

possible to style some features during development. 0.2 and 0.3 should be styled initially. Tree panel may be styled during reimplementation.