Our current video controls follow conventions of digital playback: a horizontal timeline with a slider that marks the current play point.

Current implementations of live video feed tend to be variations on video controls, but with non-interactive elements such as stationary or removed timelines. These indicate to the user what they can't do, but don't give any additional functionality. They also do not allow video to be buffered for playback.

We'd like to give the added functionality of playback in live video: the ability the keep an amount of video buffered so that users can 1. leave the live feed, replay what they've just seen, and jump back to live or 2. pause the feed and pick up watching where they left off. However, this presents a few design challenges:

Below is a design we've been considering to handle these issue. By default, the user is in a visually marked "live" mode - the box on the right of the timeline. As the user watches the live video, the timeline to the left of live fills up with how much video is buffered. So, after one minute the timeline represents one minute in length, and after two minutes it represents two. To give an indication of how much time the bar represents, tick marks marking minutes will scroll left as the video plays. Clicking the live mode button or moving the slider back to the live point (which will "snap") brings the video back to live mode.

However, eventually the video will reach the maximum that can be buffered. For the purposes of these mockups, we'll say that 10MB and 10minutes is the limit. After the video plays for 10 minutes, the beginning of the video is dropped and no longer accessible. The user sees this as the 0:00 mark disappearing from the timeline, and higher time markers continuing to scroll left.

Once the slider has moved back 10 minutes, the new video is no longer buffered: only the ten minutes immediately after the pause is stored. This is so that when the user returns, the video will play from the point they left off and not the somewhat arbitrary 10 minutes before the live video. At this point, the buffered 10 minutes and the live point are no longer connected - a visual indication such as a break of the timeline will indicate this. 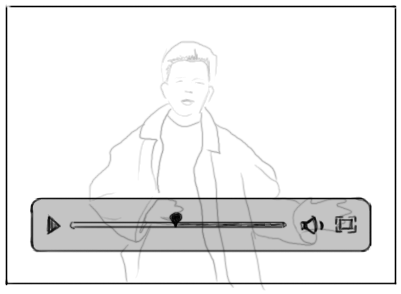 Feedback for the Streaming UI concept above has been mostly positive. A blog post was made about the original concept here, and a dev post was made here.

Possible ways to address this include allowing developers to specify display time or toggle between them with a click. (james heaver)