This will be the main page of reference for the design of Ctrl+Tab, a new feature for Firefox 3.1, and will be kept up to date with any changes.

Ctrl+Tab is a new feature for Firefox 3.1, based on Dao Gottwald's Ctrl+Tab Add-on. It will allow users to navigate their open tabs visually, textually, and through quick-switching.

The design of Ctrl+Tab will integrate as closely as possible with the operating system it is running on. Where possible, it will imitate the design and interaction of existing OS-level preview modes (such as Control+Tab on OSX).

Ctrl+Tab will consist of two different "modes" which cater to different use cases: 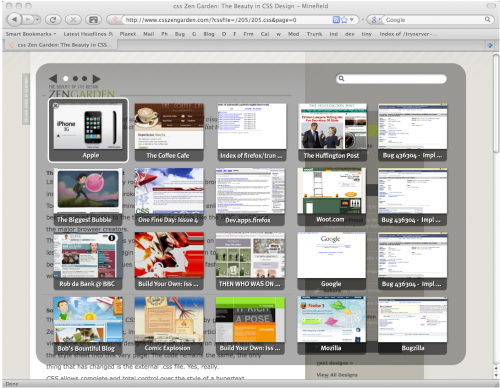 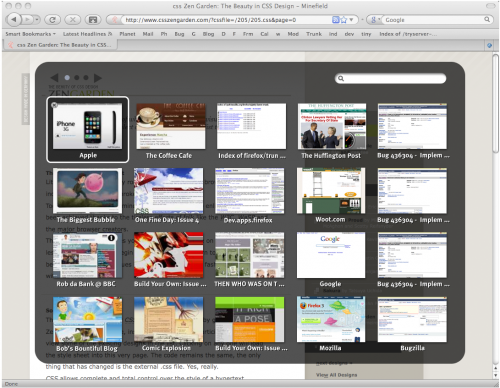 The original proposal of Control+Tab consisted of two similar modes, with the level of transparency marking the difference between All+Tabs and Quick+Qwitch. The number of thumbnails did not change between modes.

Ctrl+Tab landed and was tested in a where Quick-Switch Mode and All-Tabs mode were very similar - each showed 9 thumbnails, and the only UX difference between the two was that All-Tabs was dismissed by letting go of Control+Tab and was a lighter grey than All+Tabs. Clicking the text box of Quick-Switch would turn Quick-Switch into All+Tabs.

Ctrl+Tab in this landing was not wholly finished and contained some glitches, but valuable feedback was still received: