What is Custom Command?

Custom Command is a feature to enable 3rd party apps to register their voice commands. Voice commands will be predefined actions in the short term. We may use Action of schema.org as base and extend it as action list. 3rd party apps should use JSON-LD to state which actions they support. Once the actions detected, Vaani calls the apps to handle that.

Since JSON-LD is not implemented, we use manifest.webapp to host the supported actions information. In manifest.webapp, an app should add the following section to have custom command supported:

In this case, we create an open command whose object is a software application. Once a user says this command, an activity is created. 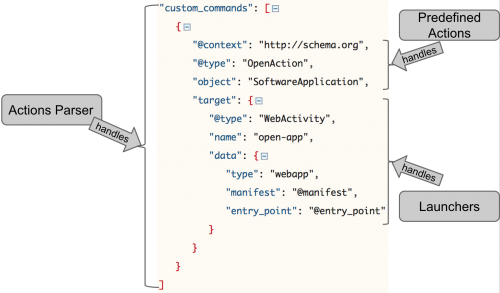 A predefined action is responsible for:

A launcher executes the command parsed by Vaani. Currently, we only support WebActivity, launchers/activity-launcher.js. In the future, we will support IAC.

We extends the original design of Vaani but changes setupSpeech and _interpreter function at standing-by.js:

In stage 1, we will implement experimental code at gaia with the following prerequisites:

We may find all sources at the following places:

The predefined actions are DialAction and OpenAppAction which will be mapped to grammar, like:

DialAction can be mapped into a concrete grammar. Since the app name may have pronounceable name bug 1180113, grammar of OpenAppAction will be defined as built-in apps.

We add the following settings to dialer app:

We add the following settings to Vaani app:

In stage 1, we use IAC to achieve interaction between Vaani and app. However, IAC is only for certified apps, we want extend it to any 3rd party apps. So in this stage, we will design a communication API for general packaged apps.