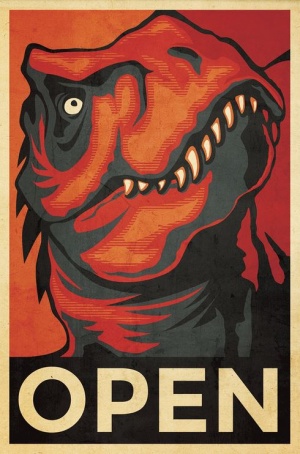 “Openness” defines Mozilla more than any other characteristic, in both the products and technologies the organisation builds and in how it operates.

In 2017, the Open Innovation team conducted a research project to help Mozilla (MoCo) revitalize participation and broader external engagement to be a source of competitive advantage for its products and technologies. The project analysed how effective Mozilla is in its open practices across both staff and contributor communities as well as how other industry actors use openness for competitive advantage. Based upon these findings, the project made recommendations for how MoCo can better invest in and execute on being “open.”

Although the project was focused on developing products and technologies (typically the focus of Mozilla Corp, MoCo), it was conducted in collaboration with the Mozilla Foundation.

In order to begin from an evidence-based, shared understanding of the problem, the project researched three perspectives:

We documented internal perspectives on open source and external collaboration at Mozilla by interviewing numerous employees, particularly those working most directly with contributors.

This component analyzed Mozilla communities and contributors to understand who they are, how and what they engage with, their motivations, and how they’re connected to one another as well as to other open source and open Web projects. This was done through a survey of over 1000 community members and an analysis of 16 years of contribution data (Bugzilla, GitHub, and more), which was driven by Bitergia.

In partnership with the Copenhagen Institute of Design, (CIID), we conducted case studies of seven organizations for inspiration and lessons. Target organizations were Sage Bionetworks, 23andme, Arduino, Aleph Objects, Automattic, NASA, and Kubernetes. They were chosen because they varied in market sector and met selective criteria such as being mission-focused, reliant upon external participation in ways fundamental to strategy and product, and supported by vital, growing communities.

The project was also informed by related research, such as the D&I study, historical community research, and current Open Source Experiments.

This was the first time Mozilla undertook such a comprehensive analysis of its community efforts, and we expect to revisit the communities and contributors research annually. 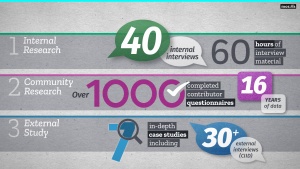 Also, note that although the project was focused on MoCo, it was run in coordination with MoFo.

Interviews covered opportunities and challenges with external community engagement as well as day-to-day management of relationships and communities. Mozilla employees firmly believe in 'open' as a core Mozilla value and that ‘working open’ can provide benefit to the organisation; however, they described many challenges to working more effectively with participants and communities. A summary of these challenges is that Mozilla has generally not kept up with market developments and opportunities around open, collaborative methods, nor has it consistently and strategically invested in participation and collaboration.

Mozilla’s position with community and participation is stronger than perhaps believed. While some areas of contribution have experienced recent difficulties – SUMO and Web Compatibility both report challenges with tools and processes – the data on actual code contribution is solid. The organization has a very visible industry profile, attracting thousands of global code authors every year (almost 2,400 new code authors in 2017 alone), which is notable relative to other mature FOSS projects. Non-employee contribution to Firefox and Gecko has grown and appears reasonably stable, and the communities around Emerging Technologies projects are growing. In addition, the data show that Mozilla is quicker than other open source projects to respond and act on pull requests.

Mozilla has strived to make its operational processes transparent and to provide engagement opportunities beyond open source co-development. Although there's room for improvement, Mozilla community participation seems well distributed across coding and non-coding projects. The qualitative survey found participation focused around events, localization, marketing, and teaching, as well as coding, with most participation occurring later in the product lifecycle. This points to an opportunity to work more effectively with our communities earlier in the product lifecycle. Mozilla certainly needs to work on gender diversity in its communities, but the age and geographical distribution was better than expected.

Other key community research findings include:

The case studies presented a rich set of findings, despite different products, markets, and organizational size. They also presented common themes in their approach to participation and external engagement.

The Open Innovation team has been posting summaries of the external research on our Open Innovation blog. We encourage you to follow the blog for more details on this aspect of the project.

The research made clear that while Mozilla's baseline is open, if the desired effects of this openness are unclear, the organisation's actions are prone to be unfocused and weak in impact. In order to be open effectively, Mozilla needs to be more deliberate about what it's aiming to accomplish and to design for that effect: Mozilla needs to be open by design.

Open by design builds on the open nature and participatory culture that is core to Mozilla. Amplifying the organisation's ‘openness’ (code, culture, workflows, communities), open by design means being more intentional in how Mozilla builds communities and external engagements in order to achieve a desired market impact and, ultimately, a collective vision for the open web.

There are several long-term recommendations for how Mozilla can be open by design. These recommendations will help Mozilla improve its position in key areas of competition and create attractive communities that provide the most benefit possible to participants (see image). They will also help Mozilla find a new, shared sense of the value of community and participation. Note that the recommendations' implications differ across Mozilla. For example, the Firefox and Emerging Technologies organizations operate under different conditions, with different areas of opportunity for open by design.

Implementation of Open by Design Recommendations

Mozilla began implementing these recommendations through several prototype projects in 2H 2017. The organisation is identifying additional projects as part of 2018 planning, and we'll work in other ways to better align our structure, processes, people, and incentives to support open by design.

In addition to these project-focused, 'teaching by doing' collaborations, the Open Innovation team is acting on some of the foundational items required to support an open by design organisation:

The project’s Core Team members drove the project and included:

The project's External Partners helped with some aspects of the research:

The project launched in March 2017 and concluded in November 2017. 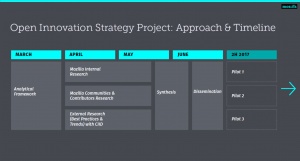 As of November 2017, the Open Innovation Strategy project is complete, and we will not continue updating this wiki entry. Our attention turns now to implementation.

We expect to run the communities and contributors research on an annual basis. We will share select findings from this research on Discourse and likely on the Open Innovation blog as well.

If you want to learn more about the project or have thoughts, suggestions, relevant research, or would like to directly participate in future research, please email the Open Innovation Team.

Our deepest gratitude goes to all the Mozilla community members who helped on this project and who continue to donate their time, insight, and efforts to supporting the open web!