IonMonkey's MIR (Middle-level IR) is an SSA IR. IR nodes are represented as objects, and organized into basic blocks, which comprise a control-flow graph.

The MIR pipeline is fairly straightforward. It is composed of two major phases:

The control-flow graph for MIR is represented via basic blocks (MBasicBlock). Basic blocks are collected in a MIRGraph, in reverse postorder.

Each basic block has the following information:

MIR objects are organized into the following class hierarchy: 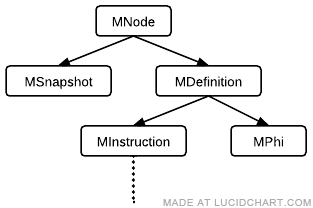 IR nodes are separated into definitions (which provide an SSA name) and resume points, which are purely informative and described later.

Definitions have the following information:

MIR is currently built directly off the bytecode in a JSScript. The entire bytecode is traversed in a single pass. The builder uses abstract interpretation, modelling the stack transitions of each bytecode to break it down into SSA.

The bytecode is traversed as if it were an AST. For example, both arms of an "if" are read before proceeding at the join point. (Note, we can do this in one pass thanks to SpiderMonkey's source notes.) However, join blocks are created ahead of time, and its predecessors are added incrementally. This allows us to lazily place phis, which is necessary when two predecessors have different definitions for the same slot.

Backedges need to be handled specially. If the definition of a slot differ between a loop header and its backedge, a phi is created at the header. Any uses of the original slot in the header, that are dominated by the header, are replaced with the phi. (Also see, "Single Pass Generation of SSA Form for Structured Languages").

For example, here is a diagram of MIR generation for the following script. Red indicates key control flow triggers in the bytecode.

Note 1: Certain control-flow triggers will automatically terminate traversal for the current control structure. These are "break", "continue", and "return". Bytecode after these are automatically determined to be not reachable.

Note 2: Copy or constant propagation is NOT ALLOWED during MIR generation. This would break phi replacement, for reasons described in MIRGraph.cpp.

Resume points are special IR nodes whose function is at the heart of IonMonkey. When deoptimization occurs, it is necessary that we resume the JavaScript program in another execution mode. This means translating the highly optimized Ion state back into the interpreter. Resume points capture the information necessary to make this happen.

For a given point in the program, MResumePoints save the SSA names corresponding to each local variable and slot in the expression stack. MResumePoints can be taken anywhere, but minimally, MUST be taken at these critical points:

This is because when deoptimization occurs, we resume the JavaScript program at the most recently-taken resume point. If this re-executes idempotent code, that is okay. If it re-executes an observable operation, it could lead to a correctness bug.

After building MIR, a few passes are run to make the graph suitable for future analyses and optimizations:

While building MIR, we attempt to attach type information to certain nodes. For example, the likely inputs and outputs of arithmetic operations, the likely targets of a call, or the likely shapes of objects for property accesses. This information is retrieved from Type Inference or baseline caches.

Type Inference: During execution the types are saved and TI gives back this list of output types that were observed. During compilation this list is frozen and cannot get adjusted anymore without requiring to invalidate the IonScript based on this type information.

Baseline Engine: During execution the baseline compiler needs to create specialized stubs. When specializing we can take put specialized information on those stubs and use these hints to better optimize the MIR nodes. Since those are hints we still need to guard during execution this is true.

After MIR is built, each instruction is analyzed in postorder. If the instruction exposes a TypePolicy, it is asked to perform two tasks:

For example, an "add" operation that has been specialized to take 32-bit integers, may actually have a floating-point input. In this case, the add will respecialize. When an instruction is respecialized, any uses of the instruction are re-analyzed. (Note that nodes can never respecialize from idempotent to non-idempotent, unless they have a resume point.)

Finally, phis are handled specially. By default, phis return values. However, if all inputs to a phi have the same type or effective type, the phi is specialized, and its uses re-analyzed.

This algorithm runs to a fixpoint.

The final phase necessary to make MIR complete is insertion of conversion operations. For example, a "bitand" operation might have a boolean input, which is illegal. This pass corrects that.

All definitions are iterated in reverse postorder, such that all definitions are seen before their uses. If an untyped value is encountered, and it has an effective type, an Unbox operation is inserted immediately after its definition. Any uses of the instruction are then replaced with the unboxed version. The goal of this is to make sure wider representation of values are killed off as soon as possible (on x86, untyped values carry an extra register).

If an instruction has any inputs, and specifies a type policy, the type policy may then insert conversion operations. For example, a specialized bitand may insert MTruncateToInt32, while an unspecialized add may insert MBox, since it requires untyped inputs.

After this phase, the MIR type checks and is ready for optimization.