Firefox Mobile could integrate with the phones applications so that one could initiate a phone call from the browser or add an appointment - even if the data is not in a microformat. This function would be especially useful since it eliminates memory load and switching between applications for pretty common tasks.

It was already tried to integrate a solution for calling telephone numbers via turning them into "links" which could be tapped to call the number. This was discarded due to performance issues since analyzing the page took too much power. If the call/adding date would be triggered via the context menu, one could possibly get around the performance problems that occurred in previous attempts to integrate this function.

The Middle endian format (11.16.03) poses a problem since it can be not distinguished from a little endian form as long as the day does not exceed the number 12. "04.05.2009" can be read as 4th of May (little endian) or 5th of April (middle endian). This could be solved by assuming the middle endian pattern if the page is in english. 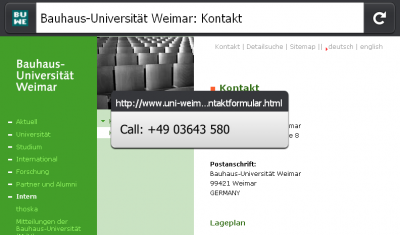 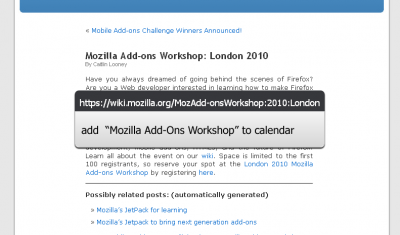 Provide possibilities to connect to the native phone, addressbook and calendar application of the used phone.

Expert-Features without utility for common users.