Lightweight Directory Access Protocol (LDAP) is the Internet directory protocol. Developed at the University of Michigan at Ann Arbor in conjunction with the Internet Engineering Task Force, LDAP is a protocol for accessing and managing directory services.

A directory consists of entries that contain descriptive information. For example, a directory might contain entries that describe people or network resources, such as printers or fax machines.

The descriptive information is stored in the attributes of the entry. Each attribute describes a specific type of information. For example, attributes that describe a person might include her name, also referred to as her common name (CN), telephone number, and email address.

The entry for Barbara Jensen might have the following attributes:

An attribute can have more than one value. For example, a person might have two common names, both a formal name and also a nickname:

Attributes can also contain binary data. For example, a person's attributes might include her photo in JPEG format, a recording of her voice as an audio file, or her SSL certificate.

Directory Server is an example of an LDAP server that manages and provides information about users and organizational structures. Examples of LDAP clients include Identity Manager, Access Manager, SolarisTM naming services, Messaging Server, Portal Server, NameFinder, and the Mozilla mail client. Such clients use Directory Server to find, update, and add information about users.

Because LDAP is intended to be a global directory service, data is organized hierarchically, starting at a root and branching down into individual entries. 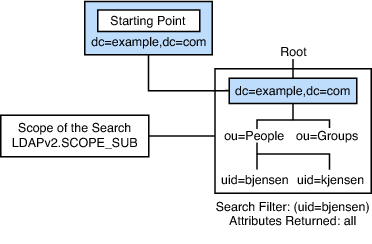 Each entry is uniquely identified by a distinguished name (DN). A DN includes a relative distinguished name (RDN), that uniquely identifies the entry at that hierarchical level. For example, bjensen and kjensen are different user IDs that identify different entries at the same level. Following the RDN is a path of names that trace the entry back to the root of the tree, such as ou=People,dc=example,dc=com. DC is short for domain component. The full DN for this example would be uid=bjensen,ou=People,dc=example,dc=com. Here, uid is the user ID of the entry. ou is short for organizational unit.

How LDAP Clients and Servers Work

To perform any of these LDAP operations, an LDAP client needs to establish a connection with an LDAP server. The LDAP protocol specifies the use of TCP/IP port number 389, although servers can run on other ports.

The LDAP protocol also defines a simple method for authentication. LDAP servers can be set up to restrict permissions to the directory. Before an LDAP client can perform an operation on an LDAP server, the client must authenticate to the server. Clients typically authenticate by supplying a distinguished name and password. If the user identified by the distinguished name does not have permission to perform the operation, the server does not execute the operation.

RFC 4511 specifies LDAP version 3. Use this version of the protocol when writing new client applications.

Many LDAP servers continue to support LDAP version 2 for use with legacy clients. This version of the protocol is specified in RFC 1777.

Clients and servers can specify controls that extend the functionality of an LDAP operation.

Clients can request that the server perform extended operations, operations not included in the list of standard LDAP operations.

Clients can use Simple Authentication and Security Layer (SASL) mechanisms to authenticate to the directory. SASL is specified in RFC 4422.

Servers make their schemas, which define the object classes, attributes, syntaxes, and matching rules enforced by the directory, available to clients through the root DSE.

Both client and server applications can support data in UTF-8. UTF-8 is a transformation format of the Universal Character Set standard. UTF-8 is specified in RFC 3269. With UTF-8, clients can request and receive data that is tagged with language information.