Mozilla UK recently had a meet up in the new London space, where there was a lot of talk about what the point of the UK community is, what it should be doing, and what the future of the community portal was to be.

These discussions led to the agreement that the site should be stripped back, include less duplicate content, and more in the way of key information specific to the UK community only.

This has lead to this new project aimed at streamlining the mozilla.org.uk website.

All this is front facing to the user. There is also a separate bugzilla instance, an owncloud instance, and possibly more.

The UK community also had (until the meet up) a Twitter, and Facebook account. Both of these have now been left to gather dust until such a time as the community is larger, and has real need for them.

Why is this all a problem?

Well it was deemed that all this is just work for the sake of work. Gervase Markham came up with a beautiful analogy that helps explain the issue.

The Mozilla UK community as it currently stands is just scaffolding for a non-existent building. Th building being the core reason and purpose of the community, and the scaffolding therefore being the tools and infrastructure that supports it. We spoke about how realistically, we need to reduce the amount of scaffolding we have, as we do not have a building that warrants the amount we have.

This document is focusing on the scaffolding, and the problem is having too much of it. By having too much scaffolding we are spending more time and effort on something that does not move the community forward. To move forward we need something that is lower maintenance, easier to use, and presents the information needed quicker and clearer. We also need to remove duplication of content that others are working on elsewhere in Mozilla, i.e. the about Mozilla content and the get involved with Mozilla content.

Specification for any solution

So when considering what to do with the community portal there are a number of requirements which do need to be fulfilled. The following list contains the requirements that should be met by any system.

The data flow diagram (DFD) is a useful guide on showing the kind of data that the proposed system will come into contact with. It shows this at the highest possible level without losing meaning in a Level 0 (the below). With this project due to the simplicity of the proposed system there is not much point going down to level one. Essentially mozilla.org.uk will be a database and a couple of workers that get data. This data is then formatted and sent back out to the user. 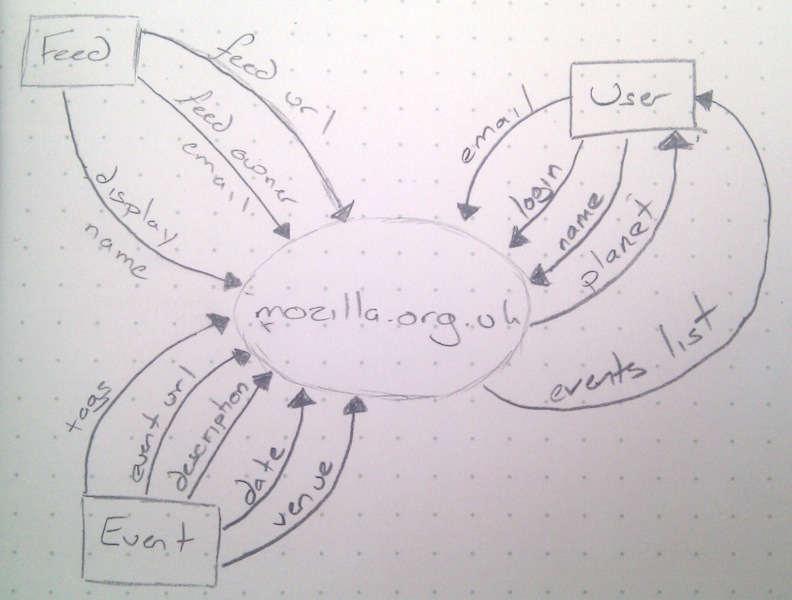 Within the proposed new system there are several entities however we can easily model them with little complexity to show how the new system allows the flow of information between each entity. 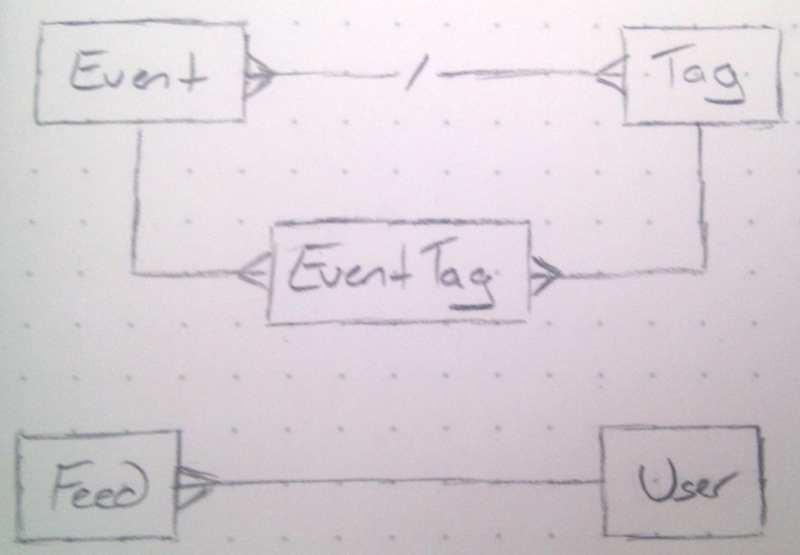 An event is, well… an event! It has the following attributes as far as we are concerned that need to be presented to users:

A tag is something that belongs to an event. It shows what type of event it is and what it is focusing on. i.e. web making, popcornjs, etc…

A tag consists of the following:

A feed, is either an RSS or ATOM feed from a member of the Mozilla UK community. It is possibly the most basic entity we have in the proposed new system. It consists of just one thing. The url to the feed in question.

A user is someone who has one or more feeds in the system, OR is an admin who is able to add / remove / update data in the system in some way.

A user will consist of the following in regard to the system.

At this stage event tag should be ignored and is only there due to forward thinking about a potential database schema.