From MozillaWiki
Jump to: navigation, search
Please do not edit this page without our permission.
Thank you for supporting! 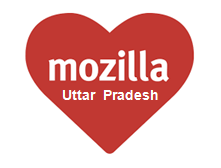 Uttar Pradesh (abbreviated as UP), is a state located in Northern India. It was created on 1 April 1937 as the United Provinces, and was renamed Uttar Pradesh in 1950. Lucknow is the capital city of Uttar Pradesh. Ghaziabad, Kanpur, Moradabad, Bareilly, Aligarh, and Varanasi are known for their industrial importance in the state. Hindi is the official and most widely spoken language in its 75 districts. Lucknow has several beautiful historical monuments such as Bara Imambara and Chhota Imambara. It has also preserved the damaged complex of the Oudh-period British Resident's quarters, which are being restored. Uttar Pradesh gives access to three World Heritage Sites: the Taj Mahal, Agra Fort, and the nearby Fatehpur Sikri. Varanasi is an ancient city famous for its ghats.
Source : Wikipedia

Mozilla Uttar Pradesh (MozUP) is one of the staunchest part of the Mozilla India Community The MozUP started commenced back in April 2015 by Vnisha Srivastav with the objective being, to bring together the Mozillians of the entire state of Uttar Pradesh so as to address the agenda of promoting web literacy across the cities and suburbs. We believe technology innovation and web literacy are critical to sustainable economic growth and social development. At MozUP, we incessantly work on the aspects that make a real difference in the lives of thousands of people like you. We host several open source events and contribute to spread awareness about the open source, FOSS and open web is what we love. We believe: “Many World One Community – The Key Success to Mozilla Mission”. Join us to be a part of this awesome community.

Mozilla Uttar Pradesh is a community of Mozillians from Uttar Pradesh, India. The community is aimed at creating awareness about web and how Mozilla has been making the web a better place. The community also spreads the various tools available and contribute in building A Generation of Web Makers & hence pacing Mozilla's aim.

Are you totally NEW ? Want to join us!!

Hi, we always love to meet new people. Then help you to join our awesome community!

Blogs by Community Members and FSA