How we're using this wiki page

We're using this wiki page to organize and prioritize our necko work on mobile HTTP disk caching. We're keeping track of both TODO lists, and general issues/theories about what's going on with the cache and how to improve it.

Feel free to add comments in this wiki: put your name on them so we can followup. I'll try to scrub obsolete comments once they're resolved (but feel free to do that yourself, too): jduell.

Theories about why the mobile HTTP disk cache is slow

We have a number of theories about why the cache is slow on mobile: (feel free to add more theories)

So far we only have aggregate data (tp4 runs) that shows the cache is often a perf loss on mobile - see Necko/MobileCache#Effect_of_Cache_Size.

We have run some tests with a slightly modified tp4m to better test cache performance. See Necko/MobileCache/Tp4m for more details.

We need much more detailed information about what's going on. So we need to write and run some microbenchmarks that will test our current theories and quantify what (if any) performance cost they may have. For further details please visit Necko/MobileCache/MicroBenchmarks.

At some point we're also going to want to have not just microbenchmarks, but also tests that run against a "realistic browsing history", so we can see if various code improvements actually help things, and by how much. We should start building that infrastructure now.

Right now this TODO list is mostly focused on getting more info about what's going on, since it'll be hard to make progress until we know why we're slow.

We've got ideas about improving the cache. None of them is validated by data yet. I'm listing them so we keep track of them (and what we'd need to have to validate that they're worth doing).

Some of these are incremental changes: some of them would require major changes, possibly including a re-write of the cache and it's current data structures.

These questions are intended to guide us in our goal of being able to turn on the disk cache (in some form) on mobile. This is not necessarily an exhaustive list, but it's a starting point so we don't necessarily go off the rails with ideas that may be more complex than we absolutely need. Bigger, better improvements to the cache as a whole can (and hopefully will!) come after mobile has anything at all.

The questions that are in strikeout are no longer relevant. With a decent-sized cache, we no longer slow down Tp. This holds true on both internal and sdcard storage. There is, however, a difference in the win based on the filesystem (Samsung's RFS cuts our win by about 50% over other devices, though it's still a win).

On Android, when Fennec is placed in the background, we have a high chance of being killed by the OS. This is so that foreground applications have more memory available and does improve system performance. For applications, this means that they need to store out state before they die. Currently, we do not do an adequate job of saving state out resulting in a pretty terrible experience when you 'switch back' to Fennec.

What we need to do is to be able to 'pin' all content that has been currently loaded, then when Fennec restarts have away to just load that from cache without issuing a 302.

Similar to the system I mentioned in (1), we need a way to pin content for long periods of time. The idea is to load that page into the browser, and somehow mark it so that it will not be evicted. The Fennec application would be in control of when a page (and related content) is pinned and when it can be evicted.

The reason we need something like this is that Stuart's has been discussing replacing large parts of the Fennec UI with content that is served from mozilla.com. For example, the "awesome screen" in Fennec might just be a https://home.mozilla.org load. When Fennec starts up, that is the first thing that they will see -- so having no network latency hit would be required.

Writes on the main thread

Any panning performance issue is not acceptable. We know that writing on the main thread in the parent process will cause some devices to block. If the user is doing a pan during this write, it will appear that the world has frozen.

Cacheing on the internal memory of a device will be limited by its small size. For example, my Nexus S (which is a newer higher end Android device running 2.3) has 16gb of storage (iNAND). 1gb is used for internal storage. The other 15gb (or so) is used as external storage. Interestingly (and somewhat unrelated), you can't remove the external memory physically. However, you can mount the memory via USB on your PC. In this case, the external memory is not available to applications

I think in the short term, we just disable the cache if the user doesn't have an external. We also should ensure that we don't die if the disk cache location because unavailable while we are running.

Maybe in the longer term, we could investigate two disk cache locations, but I don't think I care that much about it now.

For every web page retrieved over SSL, the cache saves a complete copy of the certificate chain (usually a few KB) with the metadata of the page. Reducing this overhead by writing each cert chain to disk just once might become worthwhile.

PSM caches SSL intermediate certificates, and can be set to cache some CRLs in some configurations, and will probably cache OCSP responses and many more CRLs soon. If the PSM cache isn't regulated, it could easily reach several (dozens of ) megabytes because of the CRLs.

What kind of storage space do we want to use in the various situations/what has been deemed an "acceptable" maximum cache capacity? We currently use up to 1G on desktop (depending on amount of free space on disk). Keep in mind, smaller caches will be more likely to evict entries that might be useful later on. (hurley)

I do not have alot of evidence supporting this, but I wanted to mention it. I did some simple experiments enabling the disk cache on wifi and on a cell (3g) network. What is interesting, is that on a fast network, the disk cache made no different and may have slightly hurt page load perf. While on a 3g network, it was a noticeable (~13% iirc) win. This isn't conclusive, but we should investigate this and determine if runtime-switching of the disk cache makes any sense.

Tested the affect of changing the cache size on Tp pageload results. Galaxy Tab filesystem is so bad, cache is never a win. Nexus One has a sweet spot around 4MB - 6MB on wireless (3g), where the win is just over 9%. 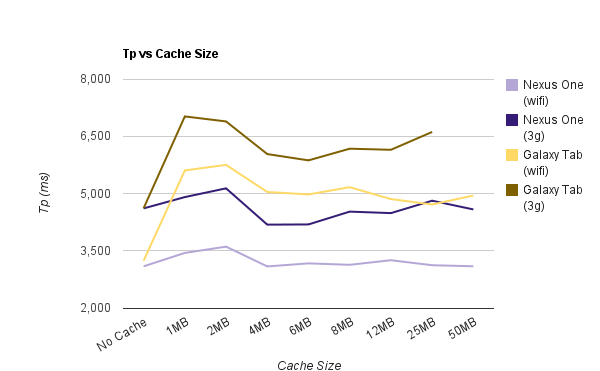 These tests started from bug 645848 (see comment 5). I collected some more data using different cache sizes and put the results in a Google Spreadsheet.